Last night I spent a very comfortable couple of hours over at the Honourable Artillery Company (HAC) in the heart of the City of London for an open evening. It was ostensibly to try and persuade people that signing up for the Territorial Army would be a good idea, although to be honest I was there for the displays and a nice evening out.

I am not ethically against signing up for the Army, it just isn’t my personal idea of fun – and would really clash with my work load requirements.

The barracks – which the HAC has occupied ever since 1641 – is just a short wander down from the rather drab Old Street area – and is a delightful oasis of greenery surrounded by office blocks, and a few residential flats. The main area is actually a cricket lawn, so the groundsmen were undoubtedly wary of what was going to happen to their turf that evening.

Dotted around the edge of the arena were quite a few displays of military hardware, including an Apache helicopter and a Chinook transport helicopter. I see the Chinooks going over my flat every day (often several times), so it was personally very interesting to get up close – and go inside for a look around. That specific helicopter had been on transport duties earlier in the day and they can cram some 40 odd people in the back, although it wont be comfortable. The Air Force chap inside answered some questions about deployments in Afghanistan and he explained that they fly about 50 ft above the ground so that the terrain hides them from their target until the last minute – and it is too late for missiles to be able to lock onto them. They have a lot of problems dodging telephone and power cables though – and the Americans apparently tend to fly at about 300 ft to avoid them. Alas, that also makes them a lot easier for the insurgents to shoot them down. 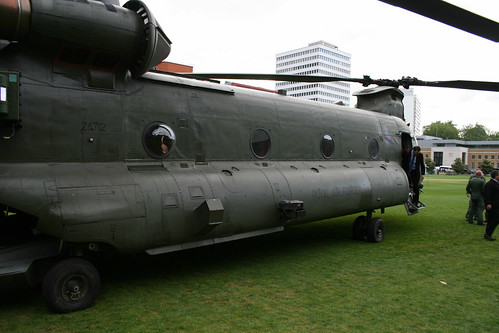 Some people were also being allowed to sit in the cockpit of the Apache attack helicopter, although I declined the offer. 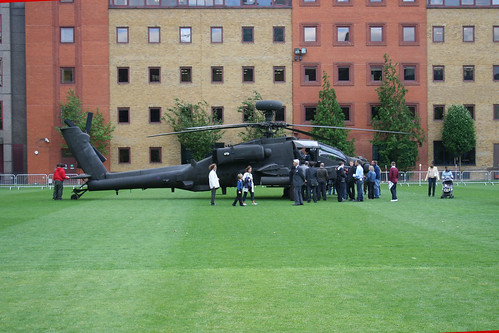 I was also interested to see a polo demo going on and had no idea that the HAC had a polo team. As an ardent fan of the sport that was quite interesting and got me thinking it is about time I started watching it again at the Guards Club – which I used to go to every weekend when I lived in Windsor.

The main part of the evening though was the military display – and it started off with a demonstration of defensive postures from some 17th century Pikemen and Musketeers. Quite interesting to watch, especially as the “lazy posture” is quite camp and raised a laugh (I can imagine Larry Grayson looking quite butch in their company!). Towards the end of the display, the musketeers also fired their guns, and as I was a) not expecting it and b) kneeling down at the time – it very nearly caused me to fall over in shock.

This was followed by a more conventional display of horsemen pulling a gun cannon – although they preceded this by explaining how they train the horses to be used to the harness and weight by having a person follow a young horse in harness and manually simulating the effect of dragging a cannon. Something which I hadn’t seen before, so was quite interesting to learn about. 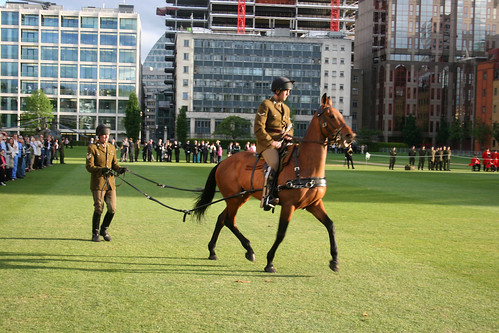 Then the main display! A simulation of an attack on a terrorist base in an undefined part of the world – although the fact that they were all in desert clothing tended to give the game away a bit. The set up was a tent in the corner for the terrorists who had just kidnapped a BBC reporter (who screamed most admirably thoughout) and a rescue by the army. Even though it was just an “act”, it was still very dramatic with all the smoke flares and gun fire going on – and quite a cheer was roused when the terrorists were killed and the hostage rescued. 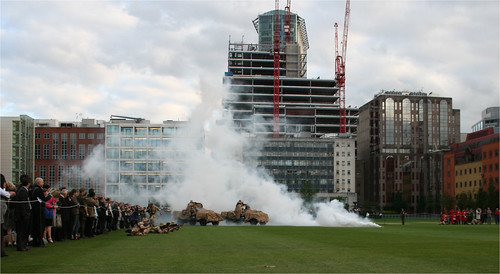 I wandered off at that point for a visit to the historic headquarters building with its huge display of commemorative silverware and medals awarded for bravery. Fellow blogger, The Londoner somehow got a guided tour – I am not jealous!

All in all, a very enjoyable evening – there is something deeply English about wandering around a cricket pitch with a Pimms in hand watching soldiers on display. Obviously, the evening was not for my personal enjoyment – but as a recruiting drive for the Territorial Army and I did overhear one family chatting to their son (?) about whether he was interested in joining and it sounds like they got a least one new member that evening.

The audience was also packed full with an awful lot of eye-candy, which – erm, ahem – anyway 😉