You wont be sleepy after a visit to the Anaesthesia Museum

Students getting high on ether parties and drowned people being revived with tobacco enemas are aspects of the history of anesthetic that the Anaesthesia Museum prefers to gloss over.

But it’s there anyway, a lingering miasma in the museum as intoxicating as drugs that have been used over the years to prepare people for the scalpel. 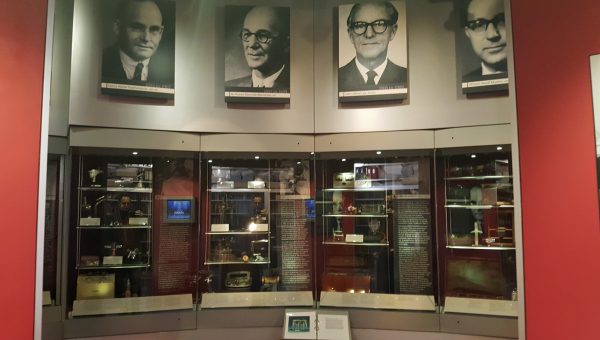 It’s arguable that the development of anesthetic is one of the two greatest developments in medical history, alongside antibiotics, as it made surgery if not possible, at least, something that the majority of us would be able to undergo.

Before anesthetic, an operation would be a hell of medical torture inflicted upon people secured to a table to hold them still in the agony they experienced.

But it’s also, outside the medical trade, a history that’s not widely known, but, there’s a small museum in a basement of a grand house that celebrates the people and the machines they invented to render people safely unconscious.

The fact that gases could have an effect on people was well known, and the Humane Society was founded in 1774 to provide relief for persons apparently dead from drowning. To prevent an outbreak of giggle’s, the museum overlooks how the inflator worked – which was to use a bellows to pump tobacco smoke into the drowned persons bum. 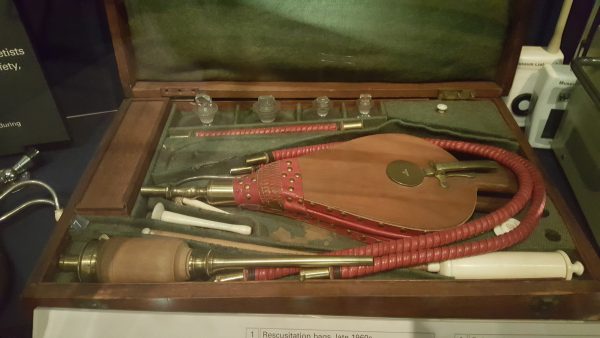 The effect that nitrous oxide had on relieving pain had already been reported back in 1800 by Humphry Davy, and in 1815, Michael Faraday reported the same for ether.

In an outcome that mirrors modern society, there followed the rise of “ether parties” as students got inebriated on the anesthetic, much as kids today sniff nitrous oxide. Long before the modern trend appeared, your correspondent was a chemistry student and after-school experiments with laughing gas were rather popular.

The first anesthetics were administered by inhalation, and it was the early years that saw most of the experiments in determining the safe dosage to leave the patient in the sweet spot of numb enough not to feel pain, but not so much so that they died.

The first demonstrations took place in the 1840s, and by 1862, the first of the mouth inhalers was already in use.

The museum is therefore a rather curious collection of what are essentially industrial machines, to pump gasses, but for use in a medical environment.

From early hand pumps and gas evaporators, all redolent of the chemistry lab, through to the big metal machines that look like they belong in a 1950s factory.

The development of cylinders of compressed nitrous oxide gas in 1868 transformed the way anesthetic was delivered, and in 1917, the first combined nitrous oxide, oxygen and ether device was invented by HEG Boyle for treating soldiers during WW1. 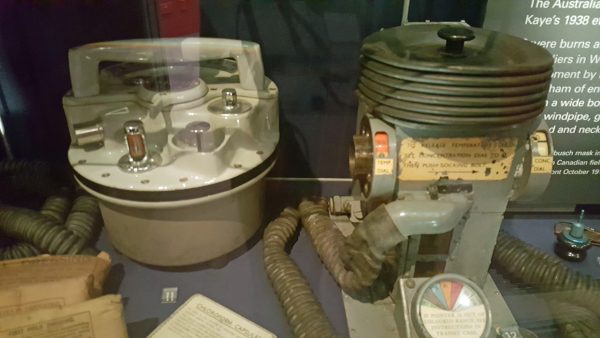 As with many early 20th century developments, it was war, and its aftermath that drove medical improvements, to treat people in numbers never before imagined. 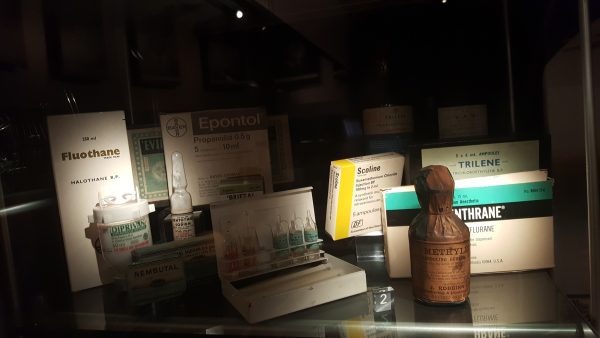 As someone who will be under the care of an anesthetist in a few weeks time, it was certainly reassuring to learn that deaths from the incorrect use of the gases have declined by a hundred fold over the past 50 years. 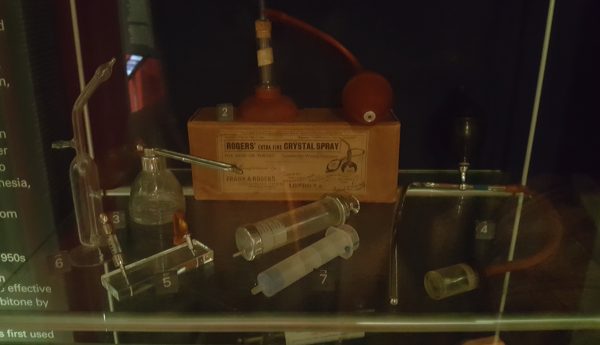 If you have a spare 30-40 minutes, it’s a good museum to tick off the bucket list of places you’ve visited.

The Heritage Centre is open Monday to Friday 10am – 4pm. Last admission is 15.30 and entry is free. Buzz the bell to be let into the building, and then someone will take you down to the museum and you are free to spend as long as you like there.