You can now hire rooms inside the Houses of Parliament

Published 6 May 2014 by Events and Tours

Fancy holding a reception inside the Houses of Parliament? Until recently only possible with the permission of an MP, the building is now being hired out for corporate events, or weddings.

Although approved last year, and seemingly been possible for a while, only last week did the Parliament website itself publicize the details, which are obviously interesting to take a look at.

Only a few rooms within the vast estate are being offered, although it does include the lovely river terrace, if you are rich enough. 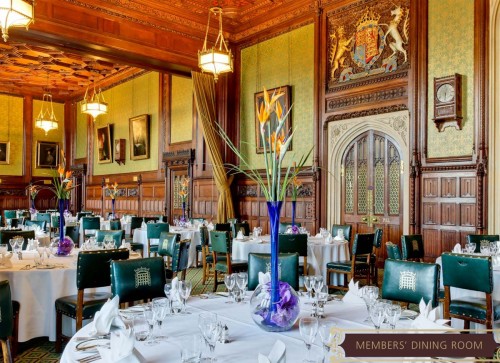 You can even get married in Parliament now — although not inside the Chapel of St Mary Undercroft.

Which, for a short moment might have been interesting. The chapel is a Royal Peculiar and thus not under the control of the Church of England, but it was included in the ban on the use of religious venues for gay marriages. Damn!

Incidentally, you can get married in St Paul’s Cathedral, if you’re heterosexual, and a Knight, and have permission from the Archbishop of Canterbury.

Back to the Palace, renting out the rooms is part of the drive to make the building less expensive to run, although considering that much of it may have to close down in a few years for a massive overhaul, if you want to book a room, you might need to hurry.

You can even book a tour of Parliament when hiring a room.

No chance of lobbying an MP though, the rooms are only hired when the MPs aren’t sitting. Don’t want to sully their rarefied thoughts with the sight of mere commerce going on!

Prices for hiring the rooms aren’t given, which reminds me of the old adage, that if you have to ask the price of something, then you probably can’t afford it.