The railway was vital to the war effort, transporting troops, horses, military equipment and medical supplies to ports around the country. Women were crucial to this, keeping the railway running by filling the skills shortage that emerged when 100,000 railway workers left to fight in the war.

Before the war, roughly 13,000 women worked on the railway, mainly in domestic positions where they cleaned, washed, etc. By the end of the war, this number had increased fivefold to some 70, 000 women.

In general, during the war, over 1.6 million women worked in traditionally male jobs, with over 100,000 of them working in different forms of transport, especially as engineers. 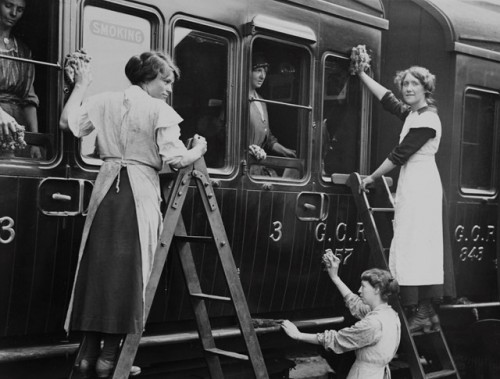 Photo from the National Railway Museum

The exhibition will be displayed at Charing Cross station between 22 July and 10 August. It will then move to King’s Cross station where it can be seen until 31 August.

The exhibition is expected to contain photos, soldiers’ letters and unique memorabilia commemorating:

Visitors to the exhibition can also support the Everyman Remembered campaign, created by the Royal British Legion in conjunction with the Commonwealth War Graves Commission. The campaign aims to commemorate every individual felled in World War I and allows visitors to research their ancestors who died in the war, via an interactive screen featured in the exhibition.