If, or when the High Speed 2 railway is constructed, it will require roughly 80 dead goats.

This curious statement comes from an old technicality as Acts of Parliament, when passed into law are still printed on vellum, which is typically made from goat skins. 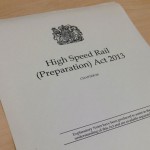 Two copies are printed, one for storage in the Victoria Tower, and another is sent to the National Archives in Kew. Now, it has proven surprisingly difficult to work out the average number of pages of A4 that can be extracted from a single hide of skin, but I finally found a page that uses sheepskins as an example.

That shows that the average sheep produces a single sheet that can be folded 8 times to produce 16 sides of vellum of roughly A4 size.

All parliamentary bills need to be printed onto vellum, but the reason I am commenting on HS2 though, is because at 49,814 pages in length, the bill is the largest one ever presented to Parliament.

Oh, and it’s a railway and I write about railways a lot.

Two copies of the Act means nearly 1,200 pages of nearly A4, which is roughly 80 animal skins.

Thanks to the frustratingly unreliable nature of animals when it comes to their size, I am having to make some very wide generalizations here, and could easily be massively over or underestimating the number of dead goats needed.

We would after all require far fewer fatted calves than anorexic goats.

To be fair, whether HS2 needs 20 dead sheep or 80 dead goats probably doesn’t make that big a difference, it’s still a pile of dead animals to build a railway. 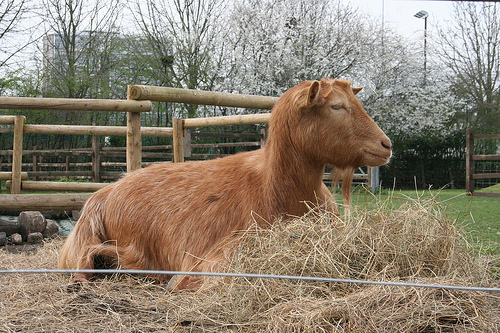 A goat at Hackney City Farm — unlikely to be part of HS2.

There have been attempts in the past to scrap the use of animal skin for printing Parliamentary Bills on, but they stick to vellum as it is known to last longer than the longest presumed life of archive paper, which at a mere 500 years (in theory) is really not good enough for an archive that needs to last thousands of years.

Fortunately, the goatskin is a by-product of the animal industry, so it’s not quite as if there will be a massive sacrifice just outside Euston as thousands of goats are slaughtered to the great railway gods.

Then again, maybe they could rebuild the Euston Arch, and turn the top into a giant altar for the burnt offerings?

It’d be more interesting than watching a government minister cut a red ribbon.

(Article edited to remove page count for environmental statement, which it turns out is printed on paper, and made up the bulk of the content)