Why is the Elizabeth line not on the tube map?

The latest edition of the tube map is missing something — an entire line has been omitted from the map — where is the Elizabeth line?

It may sound like an odd question, as of course, the Elizabeth line (née Crossrail) doesn’t start carrying passengers until December 2018, so of course, it’s not on the map yet.

The Central line extensions were due to open in early 1940 (delayed by the war), but in 1938 they were already on the map, with construction well under way.

The Victoria line, an entirely new line was partially open in September 1968 when this map was released, but showed the unfinished sections which were not due to open until the following year.

It opened later in the year, but the Heathrow extension to the Piccadilly line was already on the map.

Another Heathrow job, the loop for Terminal 4 wouldn’t be open for another year, but it’s on the map.

Huge expansion of the DLR already shown on the map in 1990, but the extension didn’t fully until 1994.

Construction started in 1993, but just a year later the Jubilee line extension would be a familiar sight to anyone looking at a tube map. It wouldn’t carry passengers for another 5 years.

So, where’s the Elizabeth line?

By historical precedence, it should be on the tube map today, as a dotted line marking the fact that it’s under construction.

This may seem like a petty issue, but putting extensions on maps before they open is important publicity. A lot of people still have no idea that there’s something called Crossrail going on, or that an entirely new railway will soon be running through central London.

Amazing, but true. And hardly a surprise that we all have different levels of awareness about something. Personally, I am about as aware of the latest celebrity gossip as some people are of the Crossrail project.

Aka, not at all aware of it.

Whatever the reasoning, we are now less than a year from the arrival of an entirely new railway line in London, and it’s about time a dotted purple line appeared on today’s tube map. 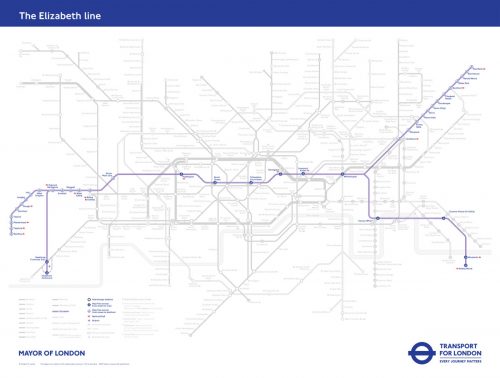