Published 24 September 2012 by Events and Tours

Every year, millions of people don a small red poppy in an act of remembrance and to support the work of the British Legion, but have you ever wondered where those poppies come from?

You might be gratified to learn they are not manufactured in a Chinese sweatshop, but right here in London – at a small factory in Richmond to be exact. Nearly 50 million poppies, all from this one small building. I say fifty million – the numbers have been rising in recent years, and they produced 43 million poppies in 2010, 47 million for 2011, and expect demand to require 50 million for this November. 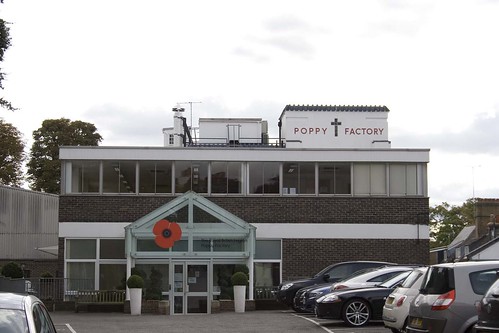 Later, an American YWCA worker Moina Michael, wrote a “response” to the poem. However, a summit held in the USA first suggested the poppy as a symbol when a Frenchwoman Anna E. Guérin explained how she helped people in France by setting up factories to produce artificial flowers, and they jointly suggested wearing artificial poppies as a symbol of suffering.

It was still not seen as something linked to a specific act of remembrance though. That moment came when Field Marshal Douglas Haig heard about the scheme and in 1921 ordered 9.5 million poppies, at a cost then of £106,000 for remembrance services by the newly formed Royal British Legion.

Earl Haig wanted to secure a reliable supply, and encouraged Major George Howson to found a factory in London to help disabled war veterans with work, assembling the poppies. The first factory was based just off the Old Kent Road, but demand soon outstripped its capacity, and in 1925 they bought a plot of land in Richmond on which they built the factory and social housing for the workers. 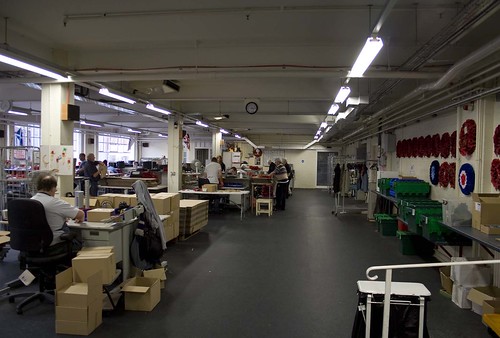 At the time, only family men were employed, as those with children and a wife to support were seen as higher priority than single men. The factory still focuses on employing those injured while serving in the armed forces – not just injured in battle, but any cause of disability while on service. They also focus on helping those suffering physiological trauma from war, which can often take a decade or more to become apparent, long after they have left the military.

Today, the factory has 47 people working on site, and a further 35 people working from home locally. One 95 year old lady working at home still manages to assemble 2,000 poppies per month for them.

Also, in recent years, the factory has received funding grants to devote more effort to helping newly disabled soldiers back into civilian life, and has secured work for 180 ex-service people in the past year and a half.

But, how are the poppies made?

There are in fact two primary poppies, which are called quite simply, Poppy One and Poppy Two. The sort you would see most often being worn by the public and sold on the streets next month is the Poppy One.

In England, Wales, and Northern Ireland, the poppies have two red petals, a green paper leaf and are mounted on a green plastic stem. In Scotland, they are different – unsurprisingly – and the poppies are curled and have four petals with no leaf and are sold by Earl Haig Fund Scotland. Scotland also has its own Poppy Factory.

Assembling the poppies is quite easy in fact, albeit a bit fiddly if not paying attention. You just pop the stem into the wooden block; on goes a leaf, then the petal, then the black plastic button to hold it together. And then dropped into a cardboard box for dispatch to the British Legion warehouse near Maidstone. Typically, someone should be able to assemble 1,200 to 1,500 poppies per day. 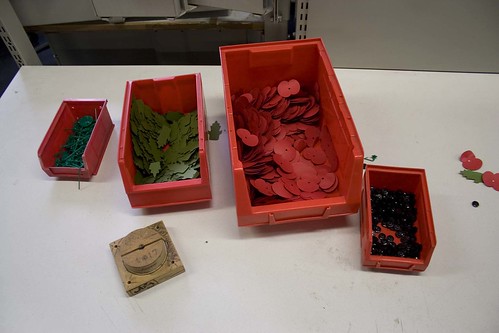 The Poppy Two is identical in concept except it is much larger, the paper petal is artificial silk and the plastic stem is wire. These are assembled in the palm of the hand without a wooden block.

On the visit, I was invited – actually, ordered – to make a Poppy Two, which I brought home with me. I won’t wear it though as it is rather grander than the normal design and it’ll just look like I am engaging in poppy one-upmanship! 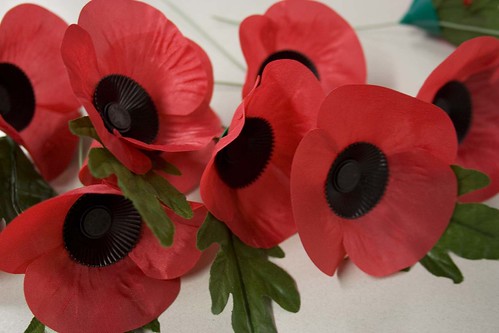 In addition to the poppies though – they make the wreaths that services around the country will lay at war memorials on Remembrance Sunday, and throughout the year at anniversaries. A typical factory worker can assemble 75 of these basic wreaths per day. Hit a hundred, and you get a box of chocolates.

They produce 180,000 wreaths per year, each sent in a fairly anonymous brown cardboard box to its intended recipient.

In the warehouse, waiting to be dispatched was a huge stack of cardboard boxes. I must admit that was actually the most uncomfortable sight for me, as it slightly industrialised the process of remembrance in a way which as an outsider felt belittled it. Obviously, the process has to be industrialised, but the stack of wreaths was both comforting that people still feel a need to remember the dead, and upsetting in that so much remembrance is required.

We only glanced at that palette in passing, but I think it was oddly the most significant thing I saw there. 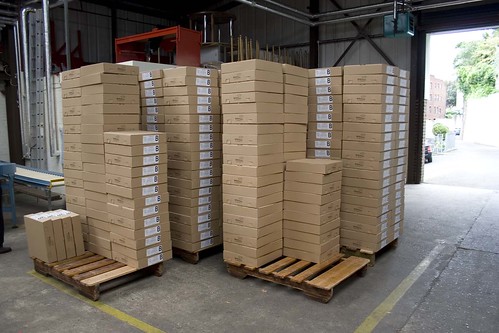 There are other things they make here, such as the huge rectangular wreath that is lain around the Tomb of the Unknown Warrior in Westminster Abbey, and various other huge memorial wreaths.

If you have ever seen the small wooden crosses placed in the grounds of Westminster Abbey – they come from here as well. It’s not just a wooden cross, but also a Star of David, a Crescent for Muslims, and recently a Sikh Khanda. There is also a simple stick for atheists and anyone else who doesn’t fit into the main religions. 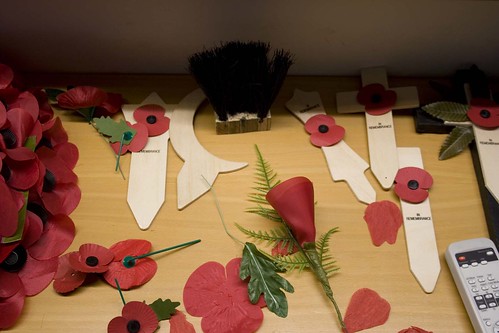 You might throw your own poppy in the bin after it is used, but the wooden crosses, each usually with a personal message are collected afterwards and burnt in order to preserve the privacy of the messages. The ashes used to be taken to France and scattered on Commonwealth Graves, but today there is too much ash, so it is taken to suitable religious sites in the UK.

The burning of the wooden crosses includes the royal and government wreaths laid at the Cenotaph on Remembrance Sunday, and with one exception they are also made here at the Poppy Factory.

The one which isn’t made in Richmond is assembled just down the road though – in Kew Gardens. That is the very ornate Commonwealth Wreath laid by the Foreign Secretary. Each year, Kew grows a number of plants representative of each of the Commonwealth Countries, and a few days before the service they are assembled into two wreaths, refrigerated to preserve the delicate flowers and sent to Whitehall.

Being made from real plants, they make two wreaths, and the best one is used on the Sunday morning. The “runt” is sent back to Kew, and they lay it at Temple of Arethusa by Victoria Gate to the Gardens on the following day. If you go past on Tuesday and there isn’t a wreath there, then you will know that something went wrong and they needed the back-up for the Cenotaph.

All the others are made at the Poppy Factory though. Most of them take about 2.5 weeks to make, but the Prince of Wales is more fussy and his takes about 5 weeks. 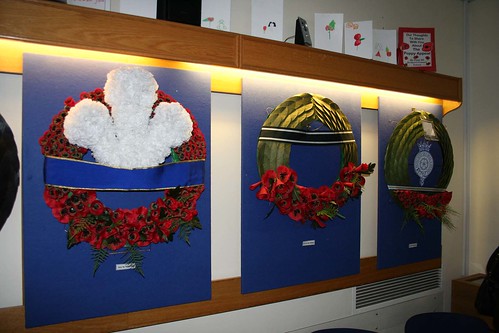 As you might expect, the poppies are also rather better than the ones you can buy in shops. However, there is a curious secret in these posh poppies. 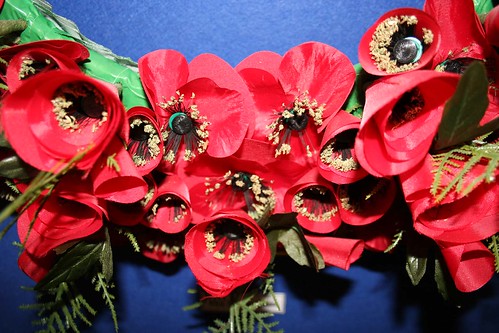 The fluffy stamens inside the poppy are made from the bushes found on the end of a domestic broom – dipped in glue and then coloured sawdust. The main supplier of brushes won’t sell them a small quantity at a sensible price, so the Factory just buys some brushes from a local hardware store and cuts the ends off.

When you see The Queen laying her wreath in November, remember part of it is made from the ends of brooms.

If you want to visit the Poppy Factory, it is open to the public on pre-arranged tours for groups. If you are a single person or small group, then they will bolt you onto a larger group to make up the numbers. Before the tour, there is a presentation and history talk about the Poppy and the Factory.

You can arrange a visit to the Poppy Factory here. It’s worth a visit.

2 Pings/Trackbacks for "Visit the Poppy Factory in South London"