In May 1969, the rear of St Pancras railway station saw a most unusual sight, as it became very temporarily an airport.

In 1969, the Daily Mail inaugurated the Trans-Atlantic Air Race, which pitted teams on both sides of the Atlantic who had to race from the top of two iconic towers in London and New York – the Empire State Building and the Post Office Tower.

This was in fact one part of a 50th anniversary reenactment of the 1919 race across the Atlantic which had been the first to achieve the non-stop crossing in less than three consecutive days.

The biggest hurdle that bedeviled the competitors was getting from the tower in the centre of the city to the nearest airport – but the RAF had a trick to play.

They landed one of the only recently commissioned Harrier Jump Jets in the centre of London – on a former coal yard just behind St Pancras Station. Although the plane was slower than others used in the race, and needed in-air refueling, its ability to land close to both of the target towers saved valuable time – and ended up winning the contest with the fastest overall journey time. 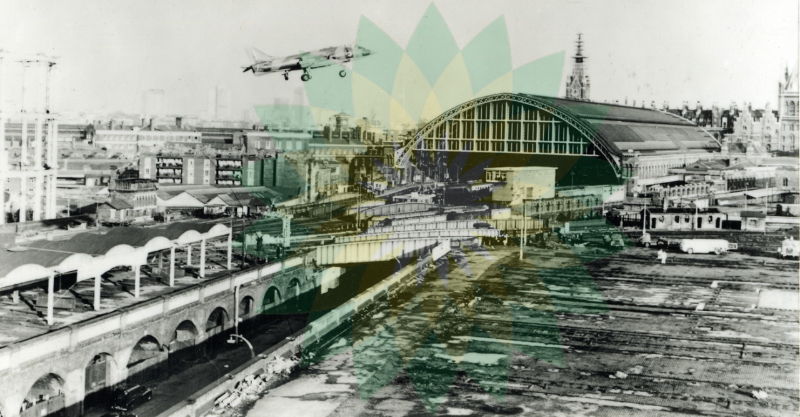 It was also a PR stunt for the Harrier as a fighter jet, which they were trying to sell to the Americans, who were initially skeptical that a plane could land without a runway.

There is a video about the Trans-Atlantic race below – jump ahead to about 2:20 on the video (relevant bit ends at 6:20).

Sadly, it would be impossible to carry out the stunt in 2019, because Harriers as a single engine aircraft are not allowed to fly over London.