What’s it like to attend the Trooping the Colour?

Anyone can watch the Trooping the Colour on telly, but what’s it like to be in the audience, in Horseguards Parade itself?

While most of the attention is on Her Maj sitting on a dais as the soldiers march around the place, it’s clear to anyone who watches on the telly, that there’s quite a large crowd of spectators in specially installed stands.

While most of the seats are for the great and good, and families of the soldiers doing the stomping bit, a quantity are offered up in a ballot, and after years of dutifully sending letters to the Man in Charge, this year, the response was a positive one.

So, armed with fine card invitations, what happens? 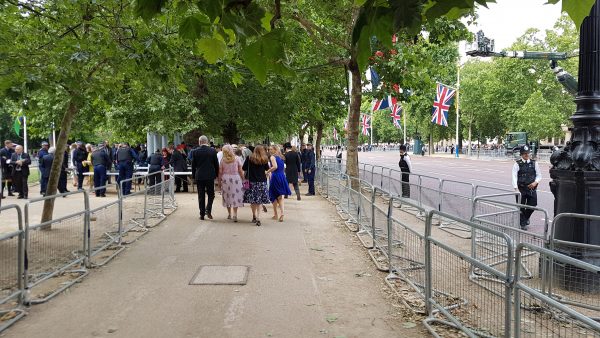 Getting to Horseguards Parade involved the now mandatory security checks, and queues of men in slightly finer suits than Whitehall normally sees, and ladies in grand hats filled areas around Whitehall and Trafalgar Square queuing up to have bags scanned and bodies checked. But eventually through the barriers and in our plastic seats.

We may be in the exclusive realm of a State Occasion, but the seating is still plastic. No expense spared by the taxpayer for this occasion.

Apart that is the advice that as this is a formal State Occasion suitable attire is required, on pain of being refused entry. The very poshest people in the seats closest to the regal head were in morning dress, while the rest of us, somewhat further away got away with ties and suits.

One chap who was allowed in, then taken away by security was dressed in a very casual manner. He was allowed back, presumably having proven his credentials, if not necessarily his ability to read instructions about attire.

Much amusement as we waited for the parade to start, when a fox ran out on the parade grounds, looked like it was heading towards St Jame’s Park only to dart back into the stands when it saw soldiers marching formally towards it.

The sun beat down, and recommendations to wear hats, in part because that’s the done thing when Her Maj is around, but mainly to protect heads turned out to be very wise.

Of course, we’re not just sitting there watching the event like passive spectators, for there is protocol to be followed, and a guidebook (with a howling mistake about the rank of Guardsman being awarded by King George V in… November 2018), had extensive instructions about when we are to stand up, or sit down.

Fortunately, each section of the stands has its own protocol guide, in the form of an officer who comes up to the front, and with two white-gloved hands gestures to stand, and to sit at the correct moments.

After an hour of waiting for something to happen, or the fox to reappear, the soldiers arrive.

Apart from the obvious commencement of the event in the form of soldiers arriving and stomping around, then the musicians, the real warning of royal arrivals is screaming.

The cheers more correctly, sounded like screams from the distance, to the point we are left wondering if a massacre is going on around the corner, but eventually, along come the carriages (stand, hats removed, curtsey) with the junior royals. Much whispering of which one had Harry in it.

Then more screams from around the corner heralded Her Maj herself, and to the delight of everyone with a camera on our side, she came right past our stands, then goes around the parade so she can have a good look at the soldiers, while everyone else gets a good look at her.

No Duke of Edinburgh today. 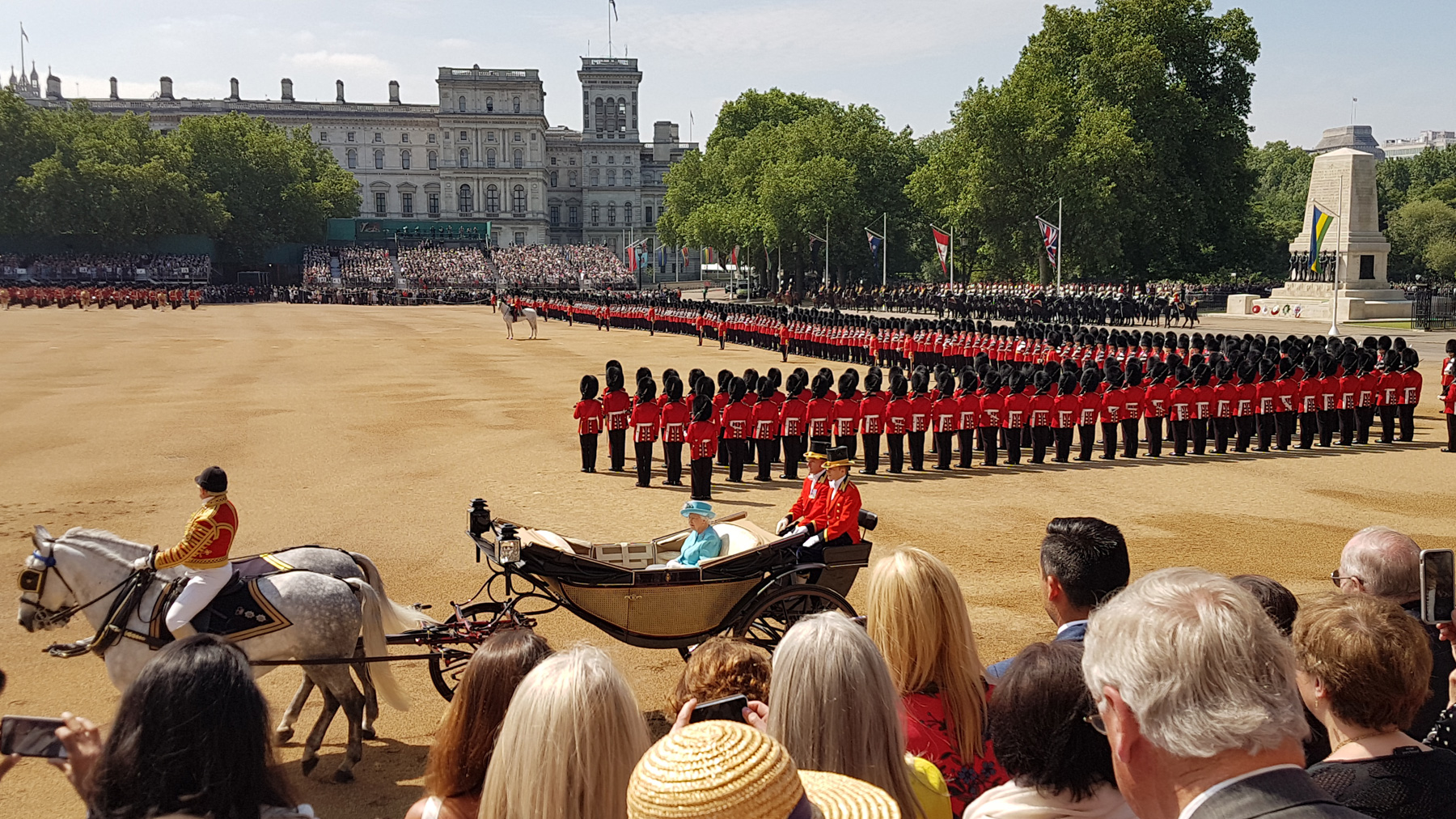 The Colours dutifully trooped the Queen rose to get in her carriage and was swept past us (stand, hats removed, curtsy) to Buckingham Palace.

Those in the audience wait a while for the ceremonial medal sweep. Medals fall off occasionally during the stomping, so are cleared up again. A hat that came off a mounted soldier was retrieved, and by tradition, an alcoholic forfeit will have been paid later in the mess.

If that’s it, then good and worth it, but in fact, the most surreal experience is yet to take place.

I half suspected that as guests we’d get first dibs in heading up the Mall to Buckingham Palace for the flypast, but it’s even better than that.

A thousand or so people in their best clothing are held back, then once everything is ready, allowed as expected to walk along the Mall, except that the public are also held back. And the public waves, and cheers.

They’ve seen the Top Royal sweep past in carriage, then the lesser royals earlier, in lesser carriages, so are we the very lowest royals being asked to walk? No idea, but there was probably just enough military sorts with medals and ladies in big hats to make it look as is this group of people walking along the sealed off Mall are very special indeed.

Nope, we’re the same as you, it’s just that our names came up in a random ballot.

But we waved back. Obviously. 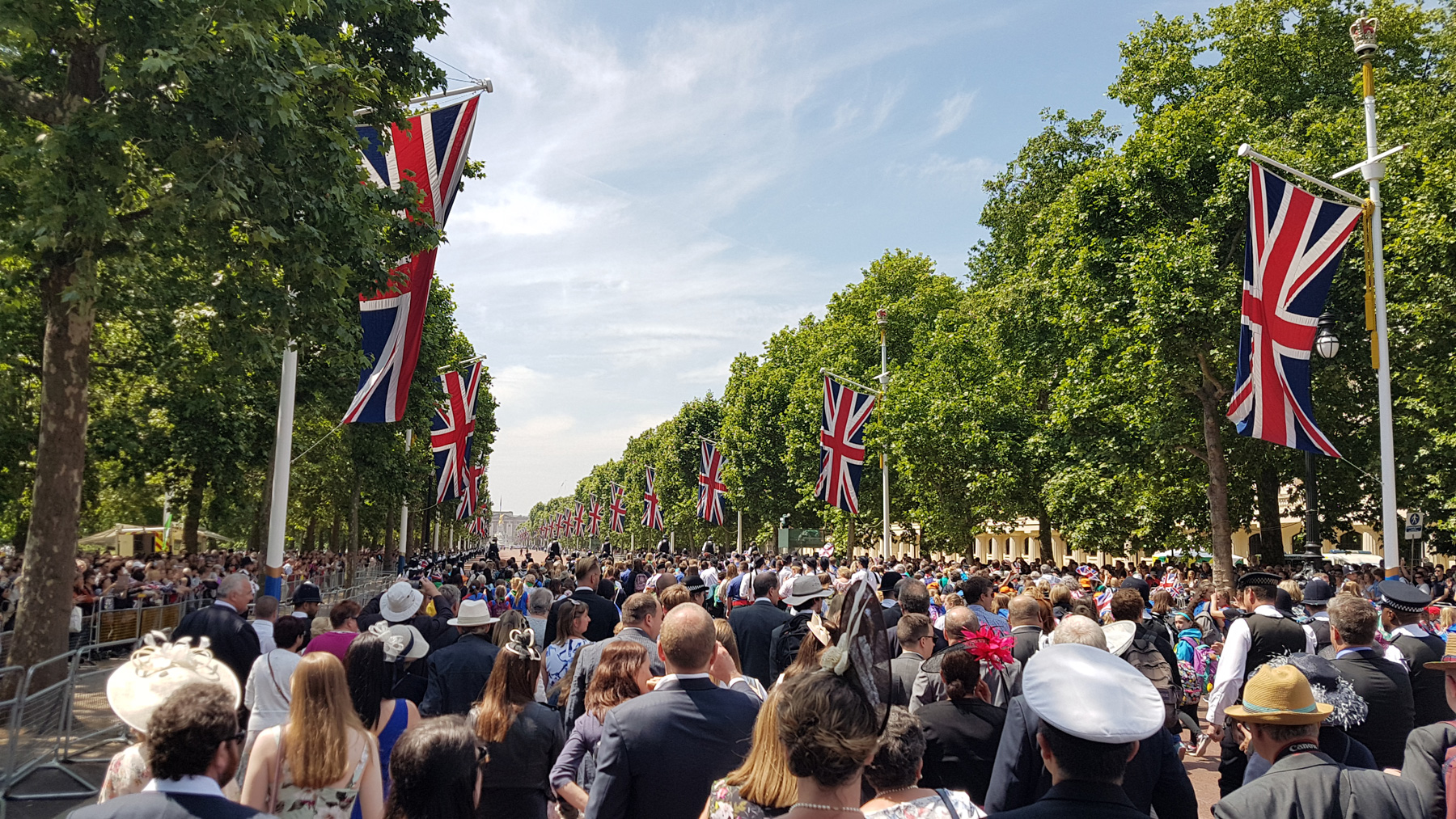 I’ve occasionally come out of important buildings via their main gates and had my photo taken by tourists who photograph anything just in case the person is important, so there are probably photos of me walking out of the gates on USB drives in Japan somewhere. But the experience of walking along the length of The Mall being cheered, applauded and waved to, was truly surreal.

It also meant being right at the front to get the very best view of Buckingham Palace where Royal wave would be most visible and the flypast most memorable. 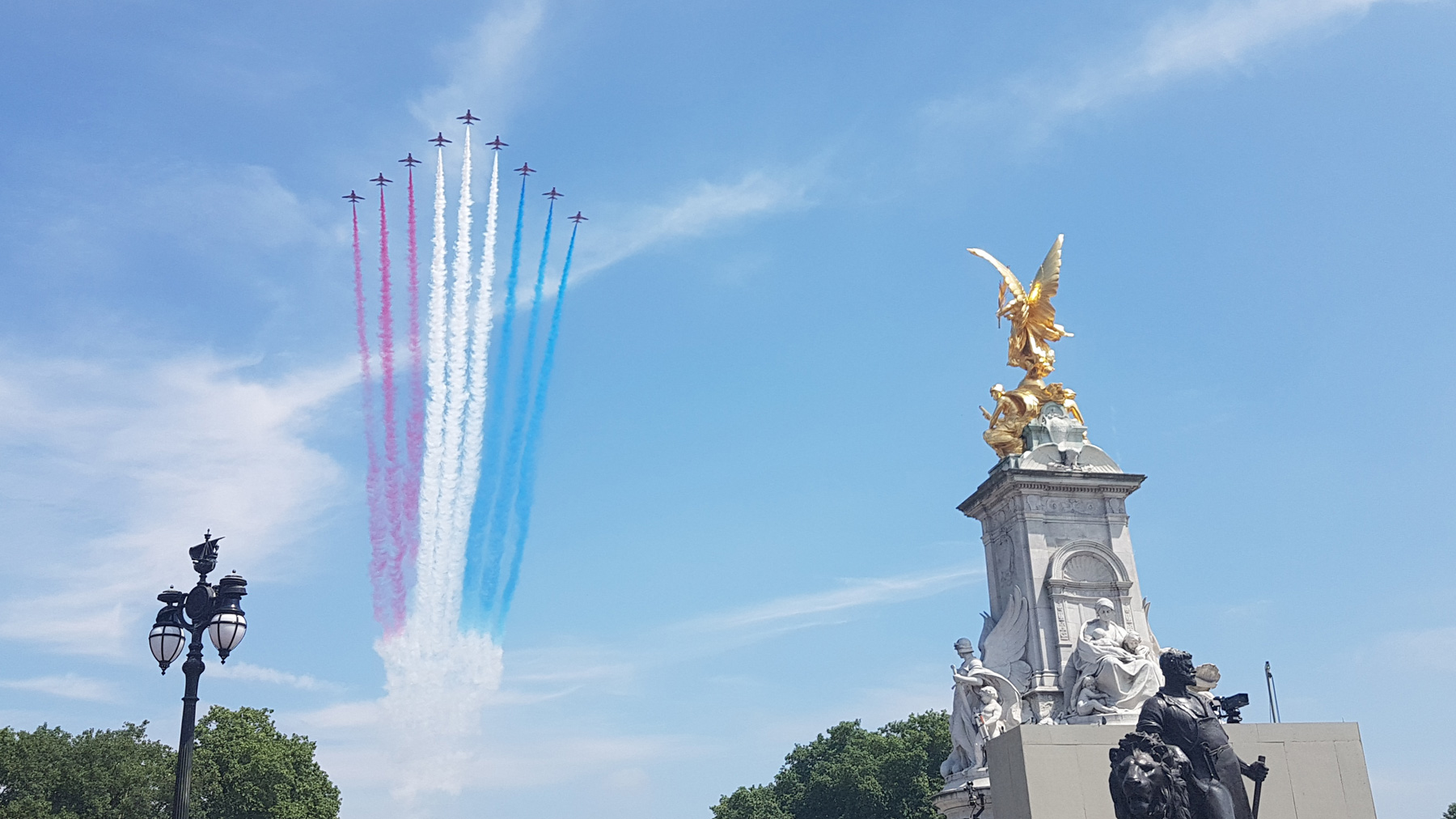 Colours trooped, Mall walked, Flypast watched. Off to the pub.

If your name comes up in the ballot, then tickets for the ballot were offered for £35 each, plus £5 for the official programme. Was it worth it? Oh boy yes.

Yes, you can watch it on the telly, and frankly, get a better view, but somethings are better experienced in person. That’s why musicians can fill a concert hall when you already have the CD, and why attending the Trooping the Colour in person was so marvelous.

Even if pomp and ceremony isn’t your thing, apply, put on your Sunday Best, and participate in something you’ll probably only get to do once in your life.

It’s a lifetime of dinner party anecdotes and envious looks from friends. 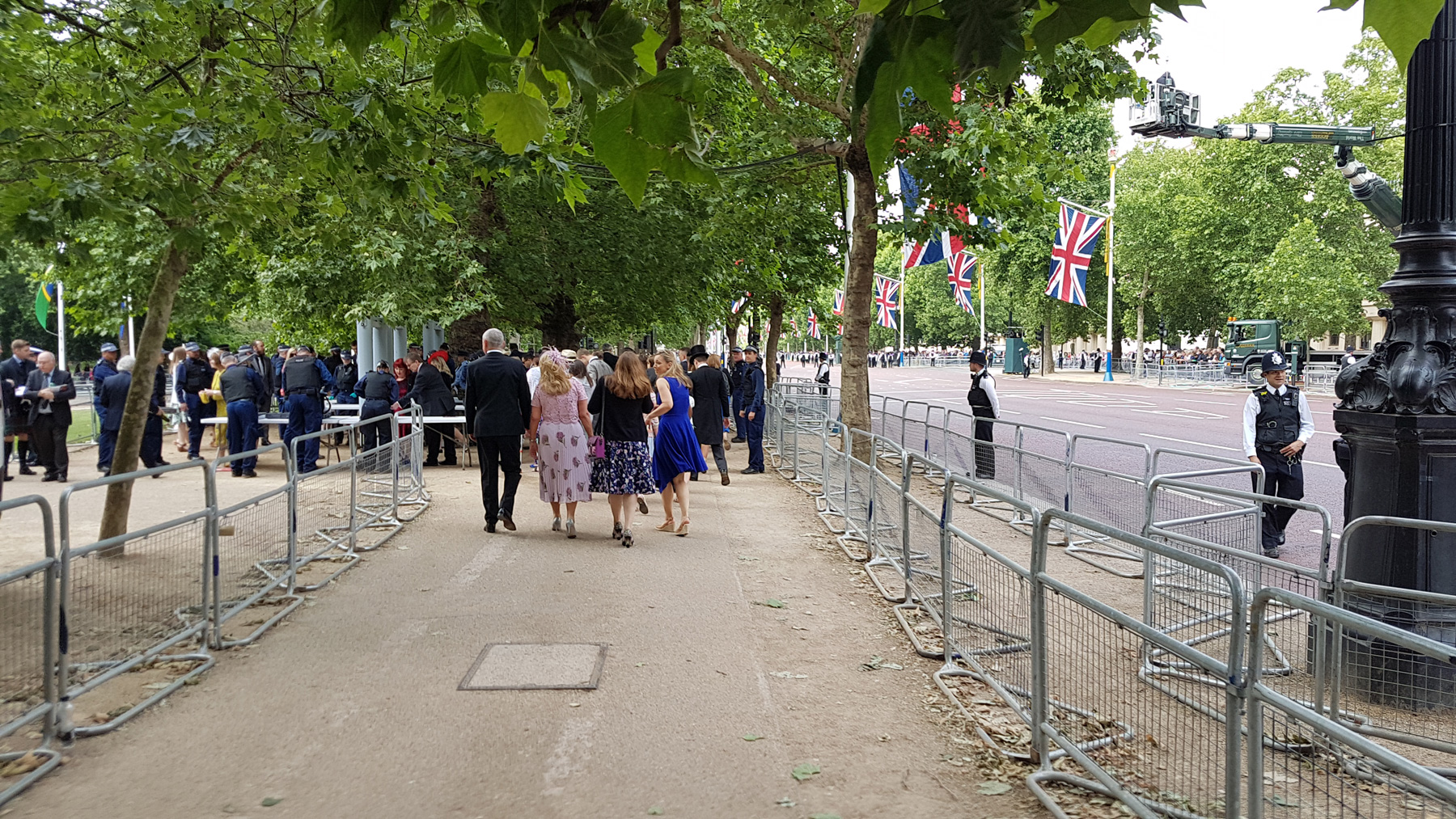 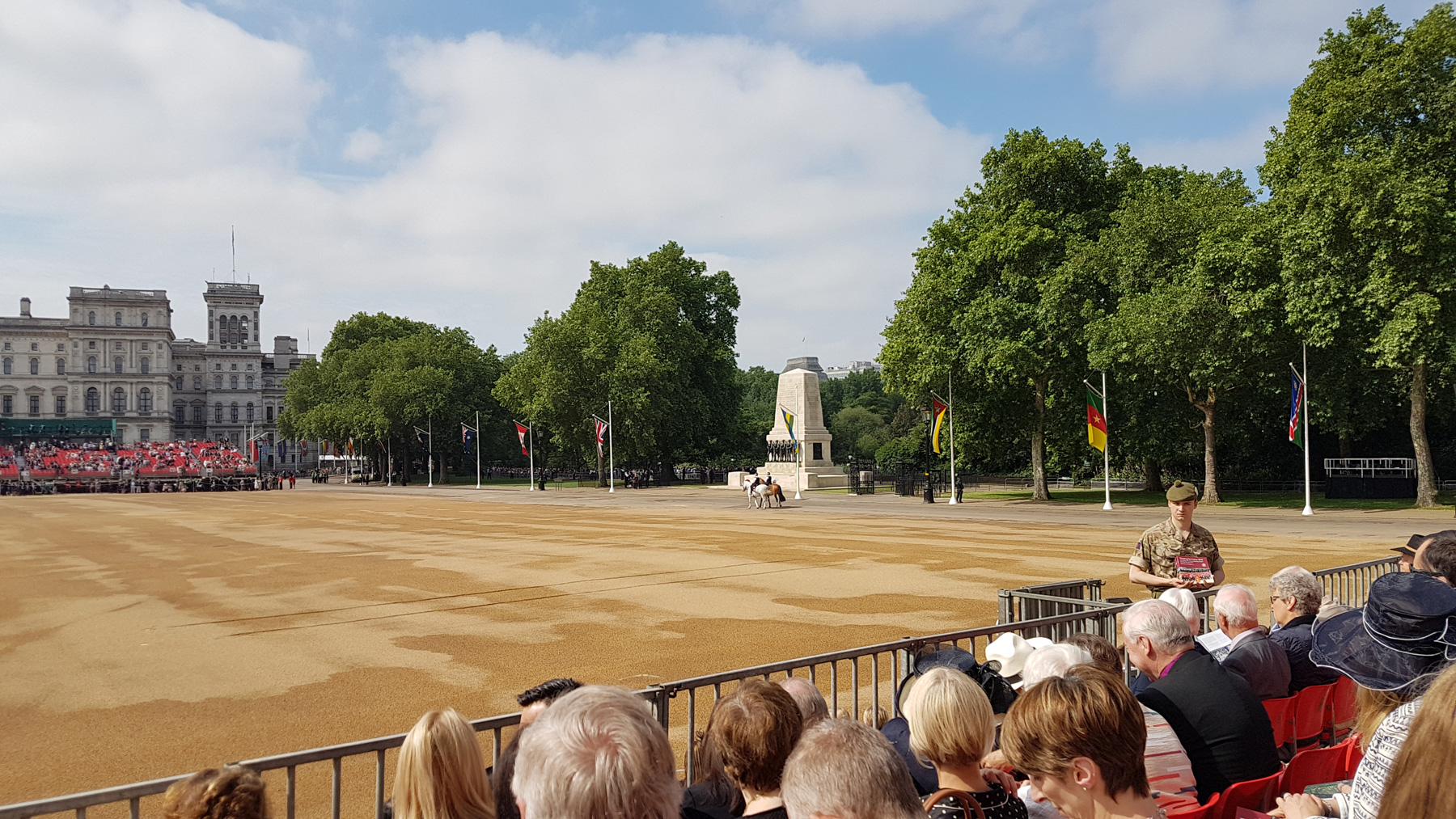 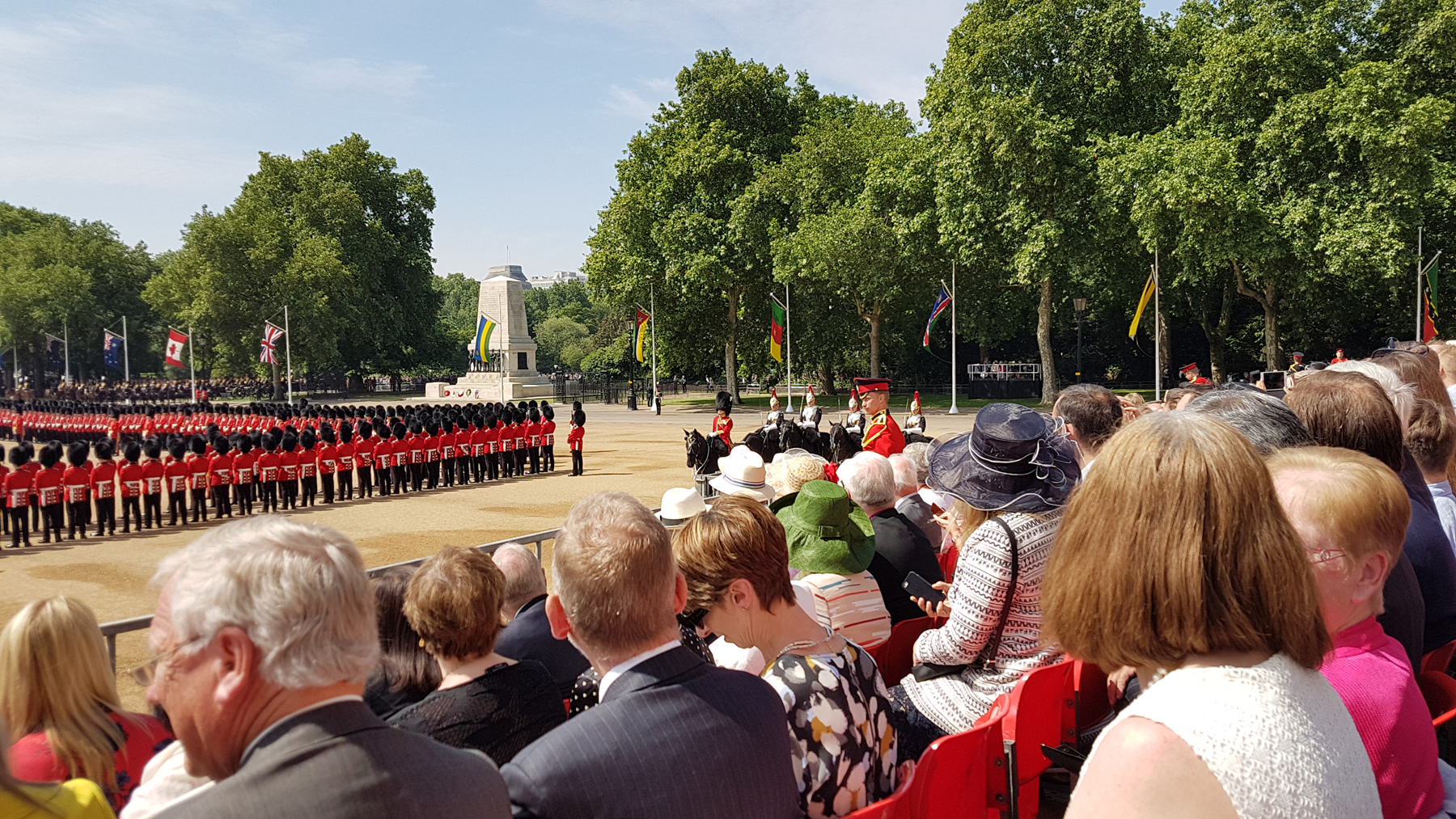 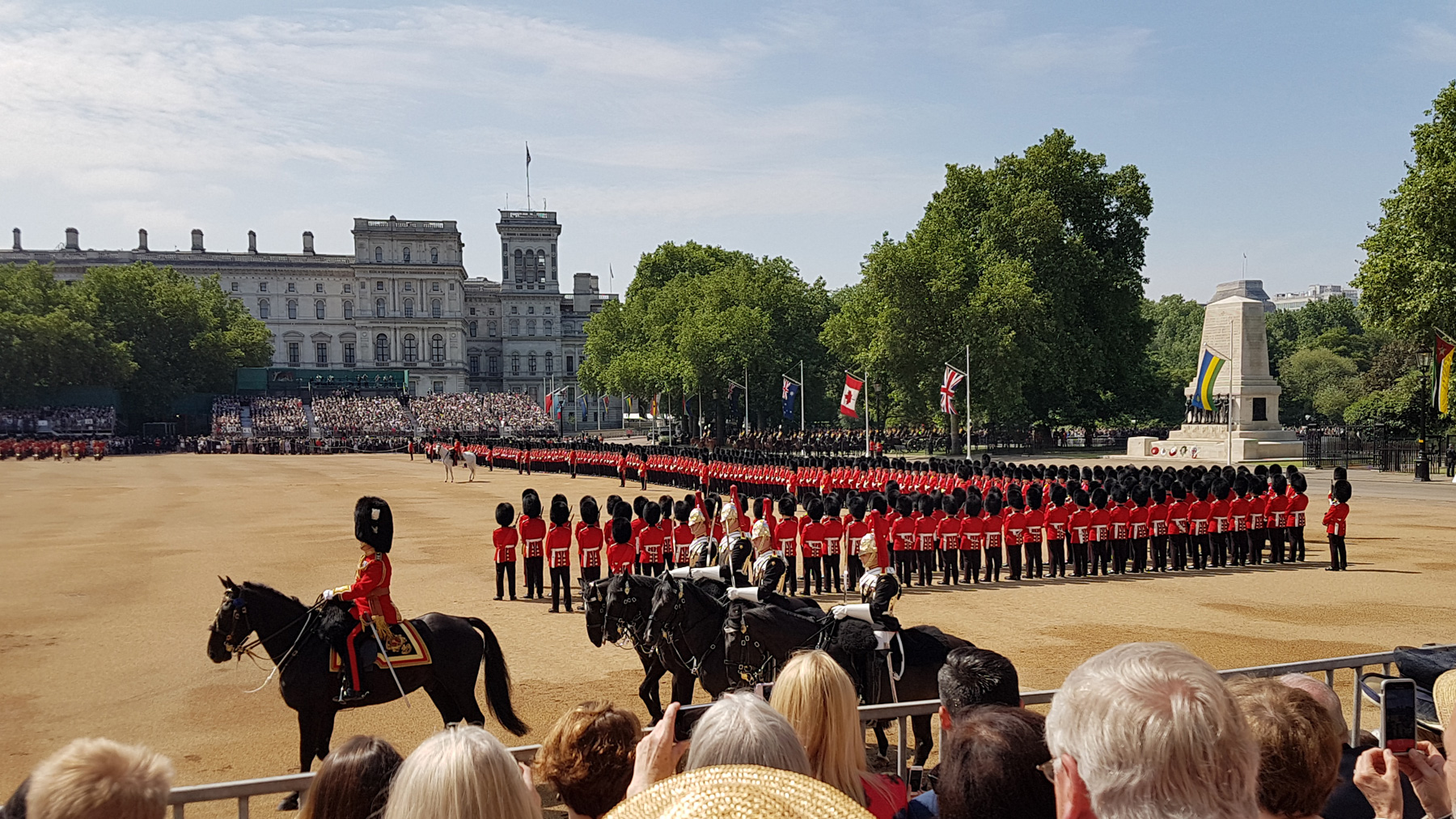 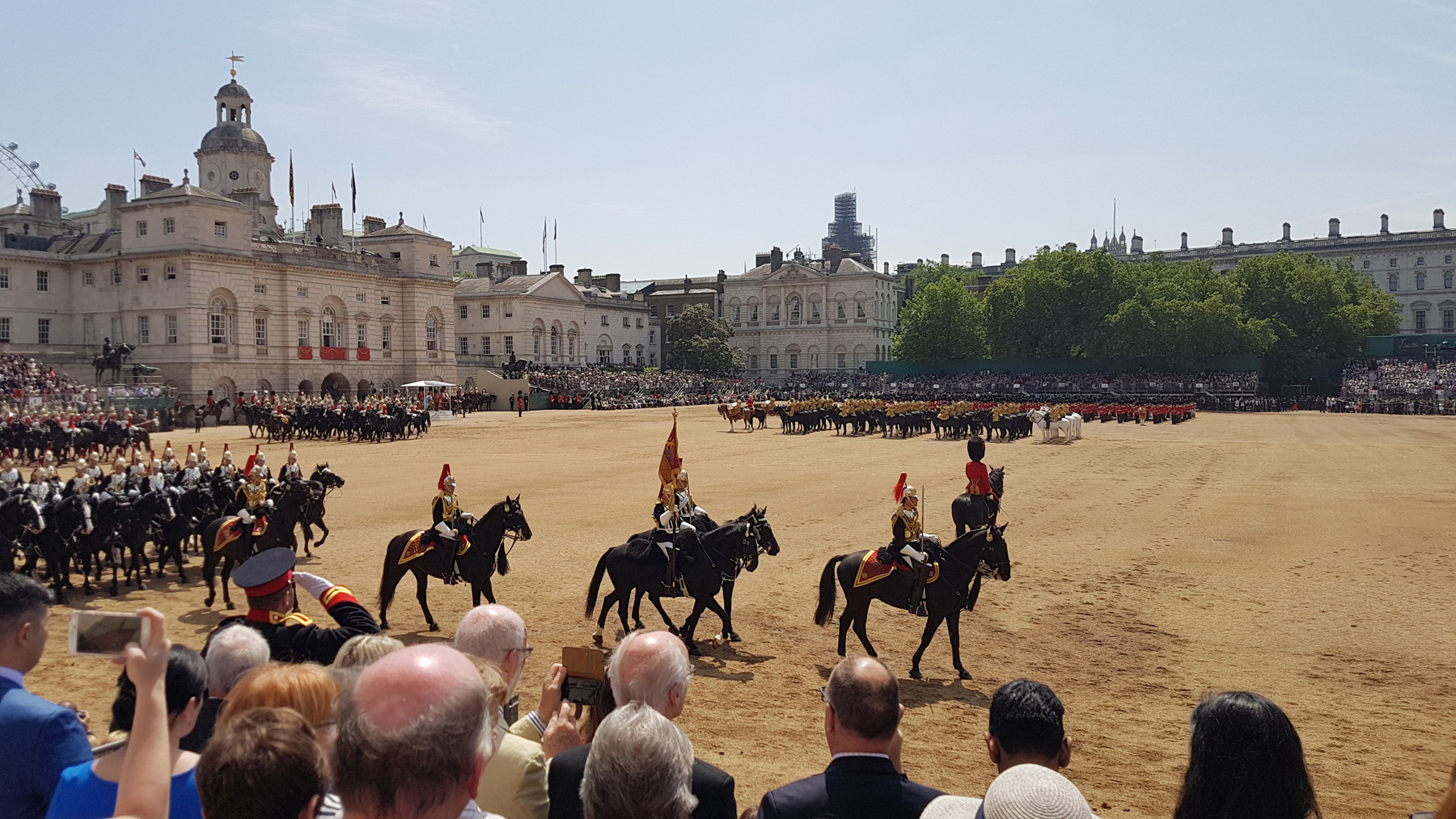 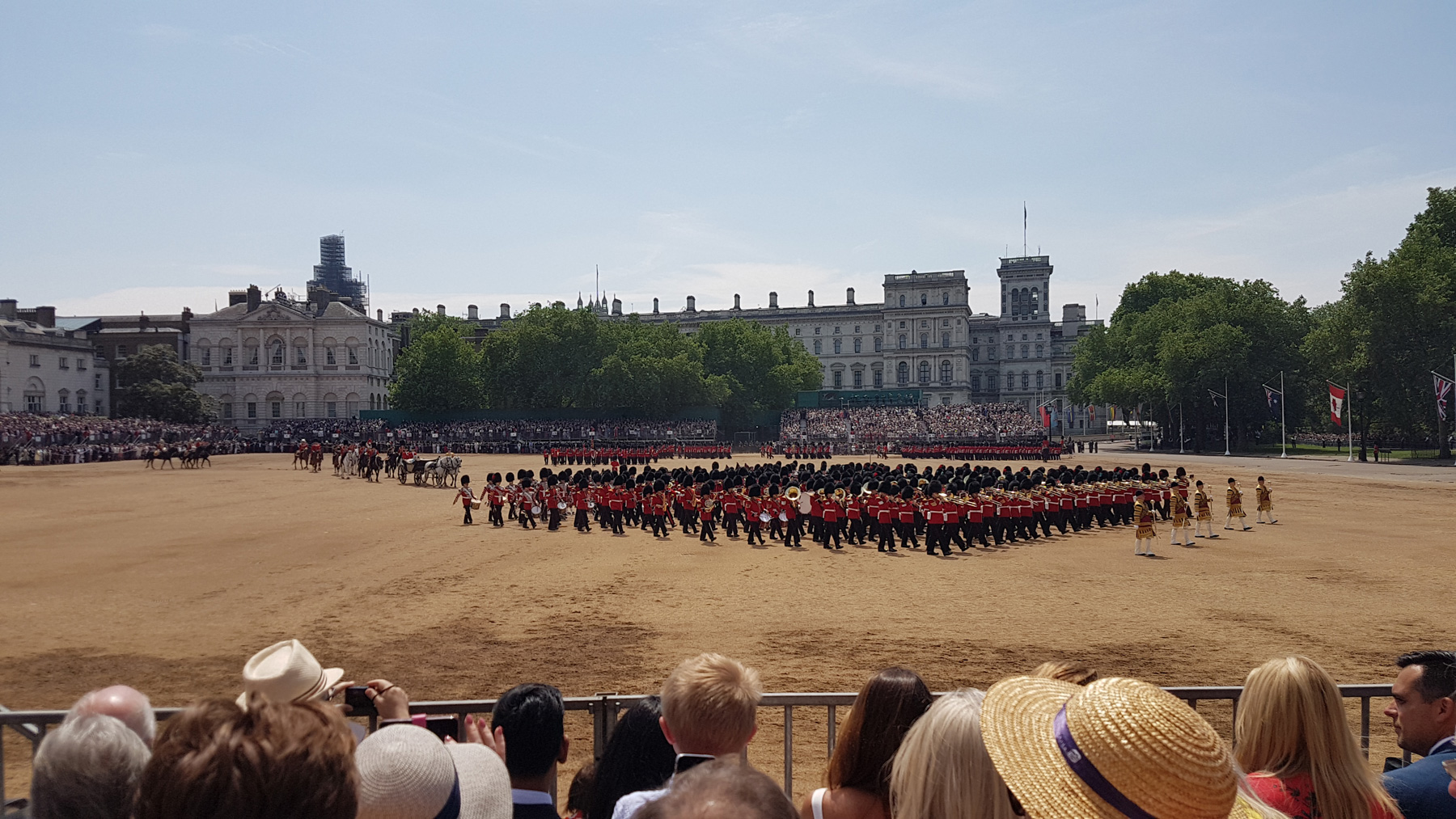 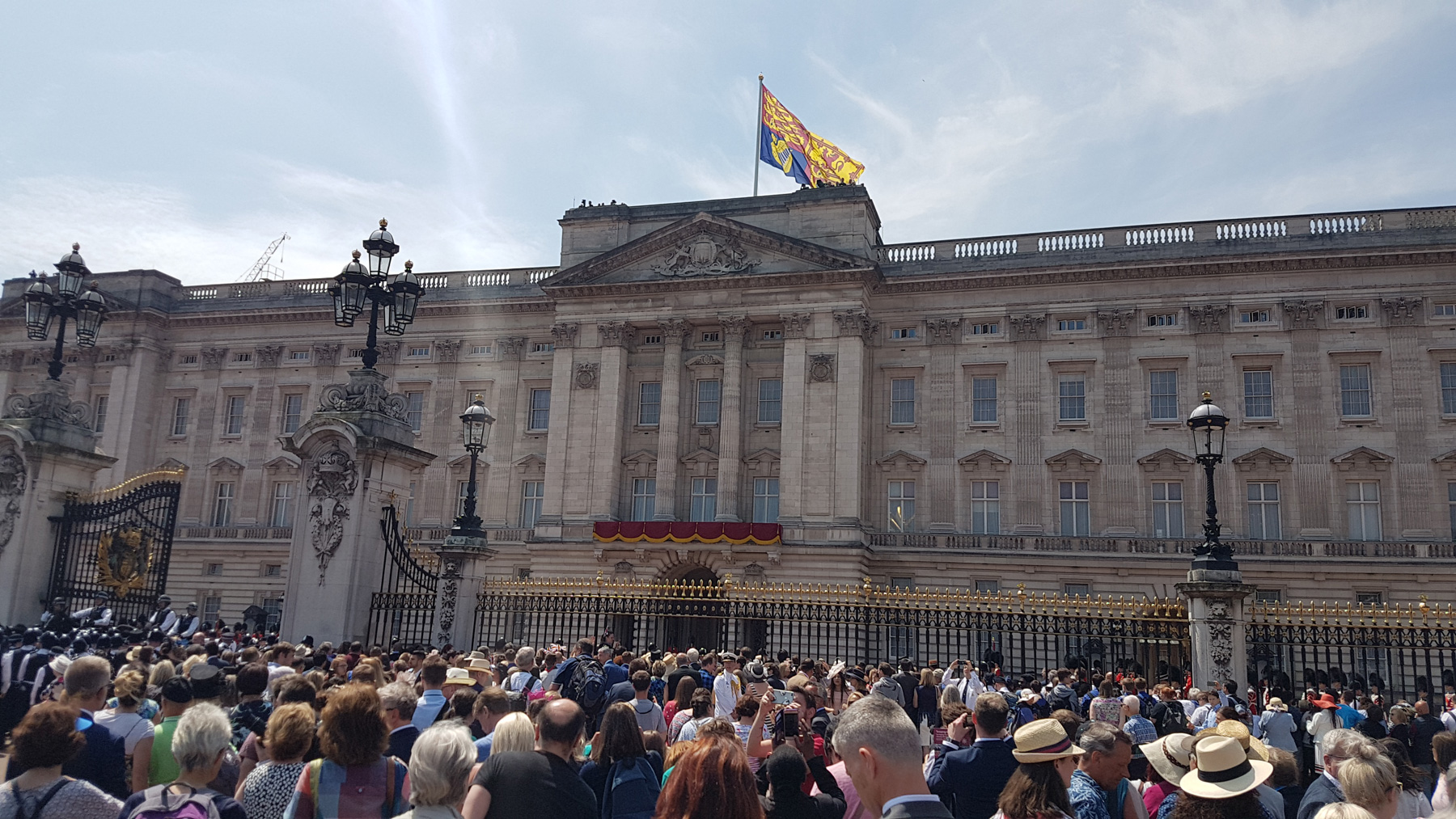 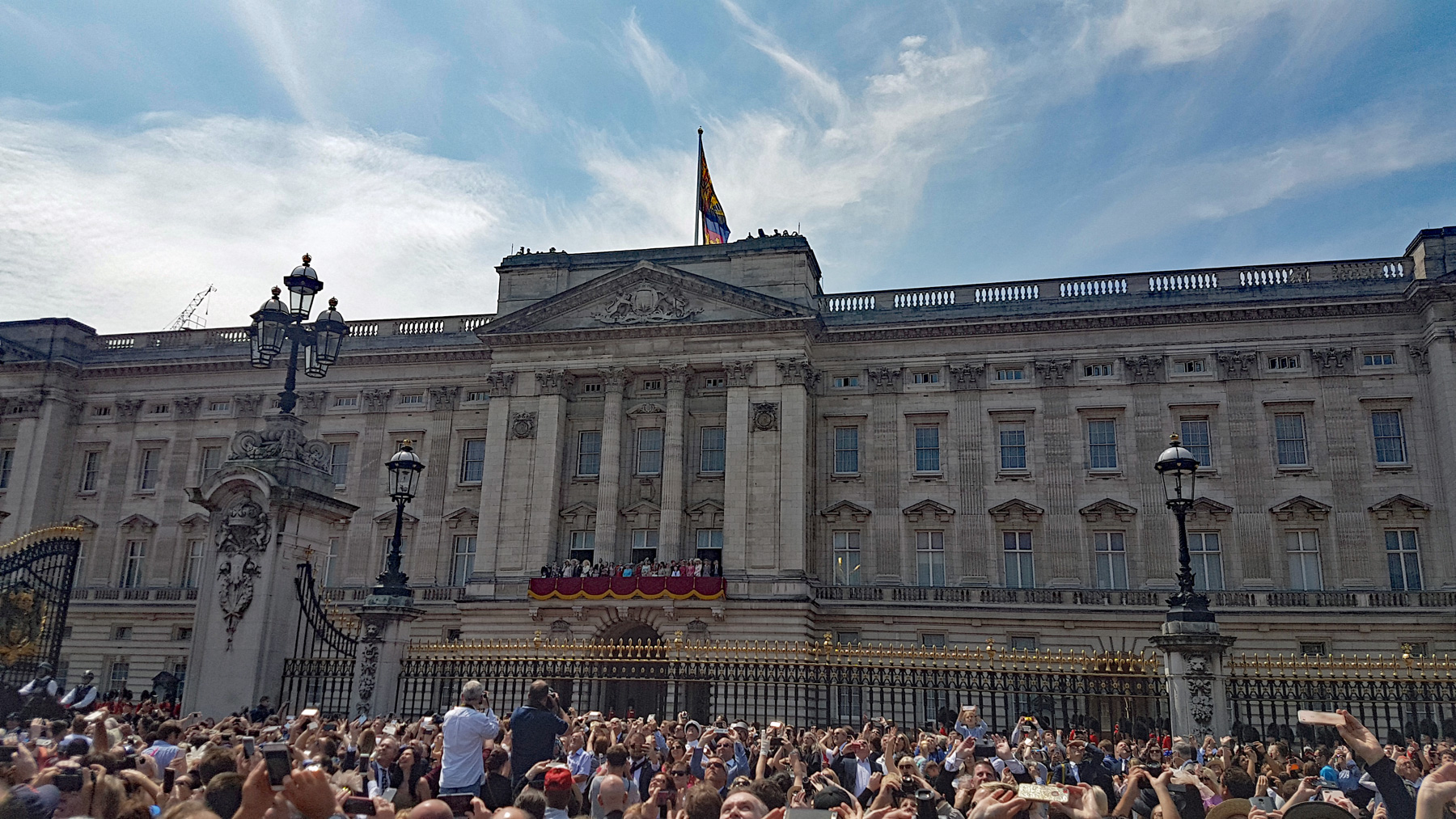