King Alfred, King Arthur, a Cathedral, a College, Saints, Stone fortresses, and more history than you can absorb in a single day – welcome to Winchester.

Winchester, a moderately sized town that dates from Roman times, was a provincial capital, and almost became the Capital of Britain. It is possible, just, to visit all the heritage in the town in one day, but if like me you add in an occasional tour of a disused railway tunnel, and then head off to look at a disused railway viaduct, it’s a two day visit at the very least.

Knowing this, I deliberately missed off a cluster of museums that share a theme – military, and focused on the rest. Assuming you visit on a Saturday (opening hours are shorter on Sunday)…

Start here, not least because it opens half an hour before everyone else and going in at 9:30am means you get it pretty much empty of other tourists.

Built around the end of the 11th century, it’s the longest Gothic cathedral in Europe, and is the burial place of many of England’s earliest monarchs. The main nave is stunning, as many are, and the choir stalls opulant. It’s around the back though, where The Important Tombs reside that blows you away with the decoration and space given over to just a few people.

Here’s St Swithun, of weather forecasting fame, and around the corner, a much smaller memorial, but more tourist friendly, is Jane Austin. 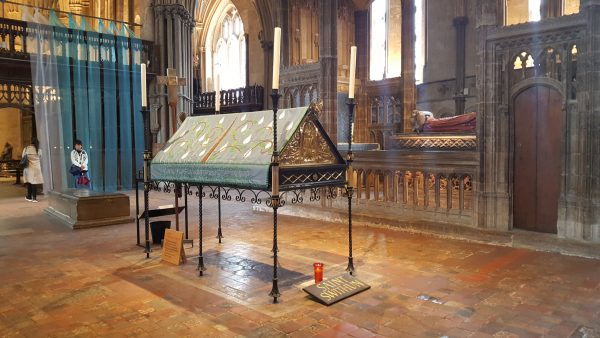 The huge stained glass window might look odd, and it is. The original was smashed by Oliver Cromwell’s forces, and following the restoration the decided to put the glass back, but in a shattered form. It’s almost modern art in the effect it creates.

There’s a chance to climb to the top on a tower tour, but I was not able to fit that in this time.

Entry is £8.50, and that’s an annual pass, which is useful if like me, you want to make a return trip. It also means you can do the tower climb another day, without paying to go back into the Cathedral. 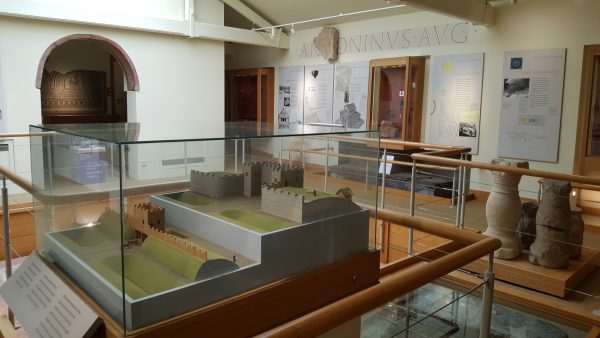 Next to the Cathedral is the city museum. It’s free to visit, with a donation recommended, and you start on the top floor then work down.

Lots of Roman era finds line the walls, including a number of mosaics, and the near intact moasic discovered at Sparsholt Roman Villa.

The middle floor is essentially Saxon to Victorian — and is dominated by four scale models showing how the town grew over the years. Lots of finds fill the glass cases that line the walls. 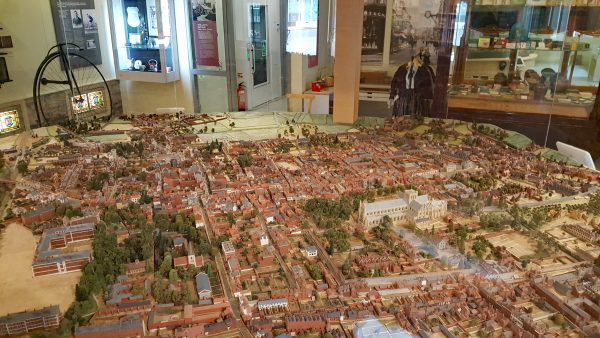 The ground floor though beings the story to Victorian times, with the huge rise of consumer shopping, for tobacco and domestic goods on display. If you though the models upstairs were nice – here’s a gigantic model of Victorian Winchester to spend absolutely ages looking at. 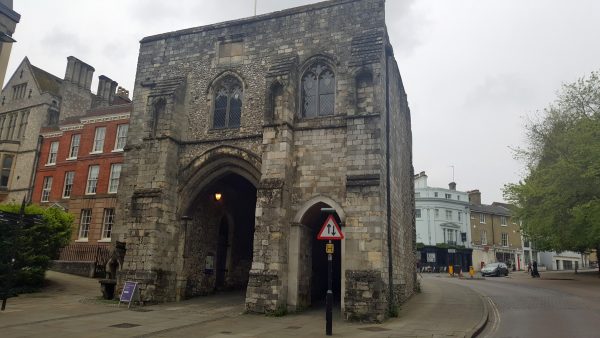 Affiliated to the above, and a short walk way is the old stone gatehouse that used to protect the city. Used for various purposes over the years, it’s now a mini-museum of its own, with a roof terrace.

The entrance is a delight, if you’re able to use stairs that is, for it’s up a stone staircase.

Here they focus on the Tudor and Stewart era, but the space is small so don’t expect to see that much on display. What’s very impressive is the ceiling, which was taken from Winchester College. 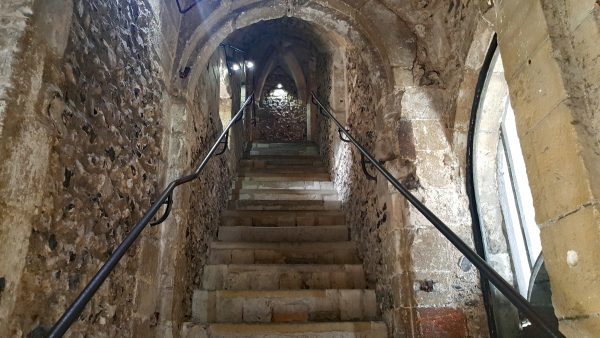 The roof terrace is up another stone and low height staircase, and sadly I would say the view isn’t that stunning. Probably was once, but modern buildings and lots of trees mean you don’t see much anymore. It’s a nice diversion though. It’s also free to visit. 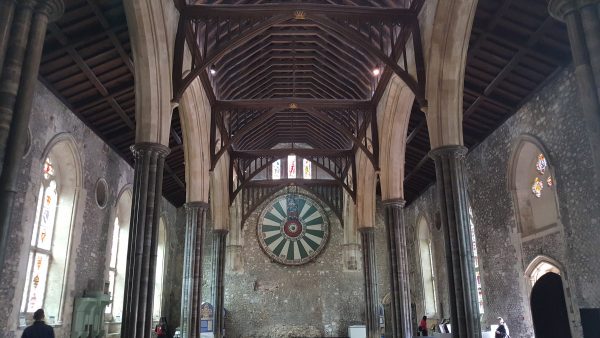 Housed in the Great Hall, one of the finest 13th century halls still surviving is a large round table hanging on the wall.

This isn’t King Arthur’s Round Table, although for a long time, it was thought that it probably was.

The hall was also once a court house, and served as such right up to the 1970s. More interesting is the huge statue of Queen Victoria, as it’s one of the very few of her sitting.

A long gallery tells the history of the hall in quite some detail. 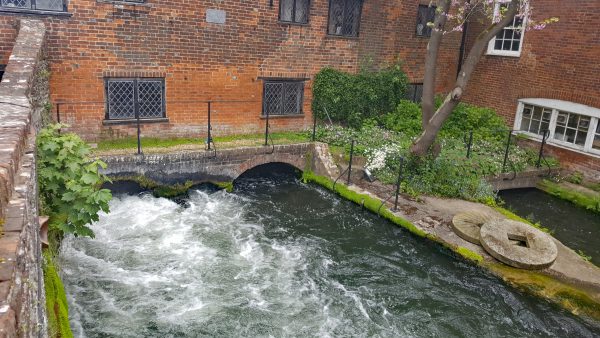 There’s been a mill on this fast flowing river for around 1,000 years, although the one that’s there today dates from 1744. Normally, there are milling demonstrations, but at the time of writing, they are repairing a the effects of a devestating flood that nearly destroyed the mill.

They’ve cleverly put in a glass wall so you can see the works going on, with a lower porthole for the kids.

What you do want to do though is go downstairs to the water wheels, where the rush of the high speed water and spinning water wheels is an almost infernal noise. Quite exhilarating. 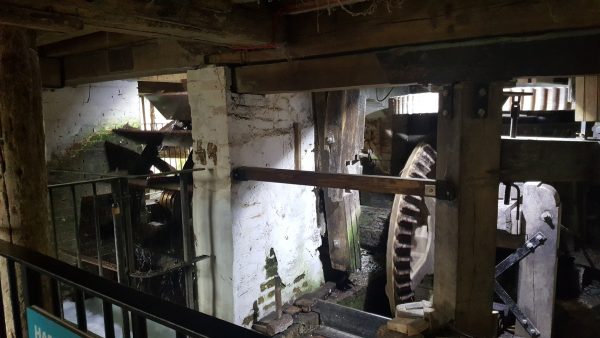 Look out for otters, the mill is famous for them.

It’s a National Trust property, so if you’re a member its free to visit, otherwise £4.40 to go in. 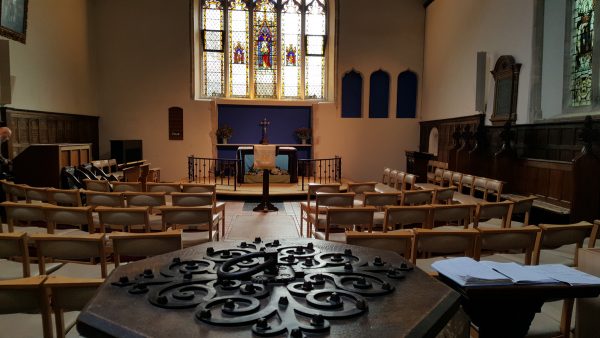 This tiny church is very easy to miss as it’s on a covered path leading from the main street to the Cathedral and you can walk past not even noticing it. But notice it you should, for this is probably a Norman church, now crushed in amongst all the shops that surround it.

Quite quite small and quaint, with small windows and a recent glass door that helps to keep the noise out.

St Lawrence is still referred to as the Mother Church of Winchester, for it is the only surviving parish church of Norman foundation within the city walls. 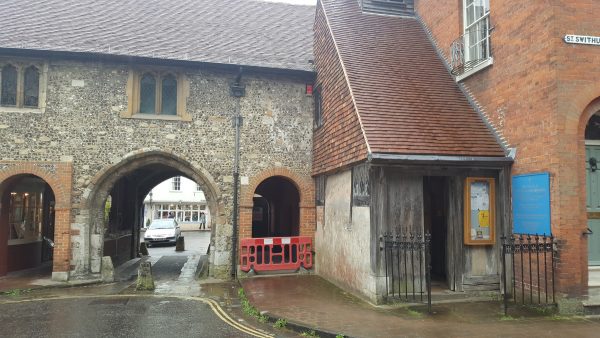 Another incredibly easy to miss church, attested to by the fact that I walked past it several times that day without realising there’s a church here at all.

It’s in the upper floor of the stone gate house, and entry is up a flight of steps on the opposite side to where most people walk. But do go up, as it is utterly delightful with wooden beamed ceiling and whitewashed lime walls and deep recesses for windows. 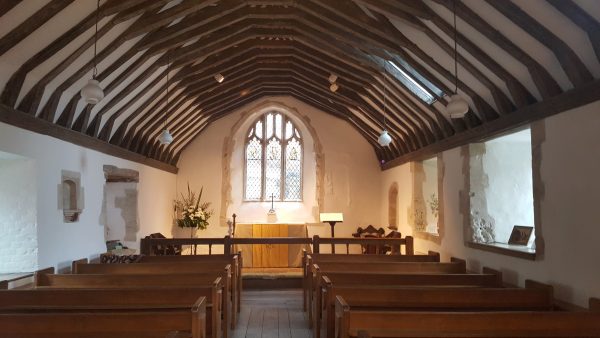 Churches built over city gates were common in medieval times, but only a few survive today. Entry is free.

Thought to be the oldest continuously running school in the country, this rather posh school offers guided tours of the main buildings.

It’s a good mix of the history of the founding of the college, serving both free scholars who get in on merit and rich parents sending kids regardless of ability to be educated here.

The grand dining room, open only to the scholars is very old boarding school with 17th century tables and a high table for grand guests.

Being slightly rushed around by the tour guide whose blue robes flapped as she trotted around in a very Harry Potteresque style, which is quite appropriate as the college features in the films. 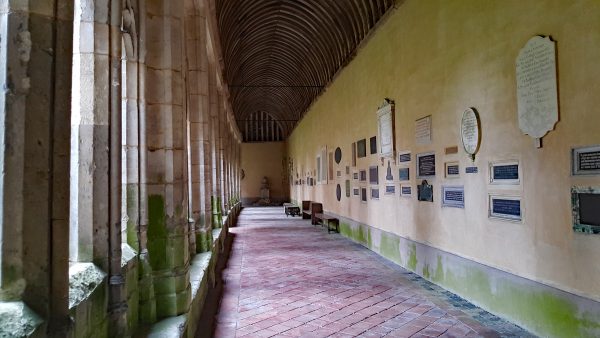 Winchester College still requires students to have a faith, of some sort. Atheists are not allowed in. The only indoor space we could take photos was the Catholic chapel, which sits within the cloisters.

The tour took in a side room with a painting of the perfect servant, which is now a college emblem, and the side chapel for prayers. 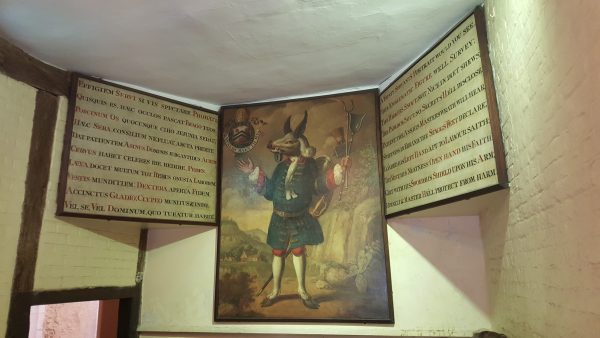 Although you don’t see much, it’s still a good hour long tour, and actually, quite worth it.

The Treasury is a combined heritage and art gallery sort of space, in former stables, and quite nice in its own right, but not that amazing. It’s a sort of mini-British Museum in that most of the stuff on display came from overseas and was donated to the College.

A combined tour and gallery ticket costs £12. Do the tour first, as the gallery is difficult to fill an hour with otherwise.

Tickets have to be bought on the day from a nearby map and prints shop. 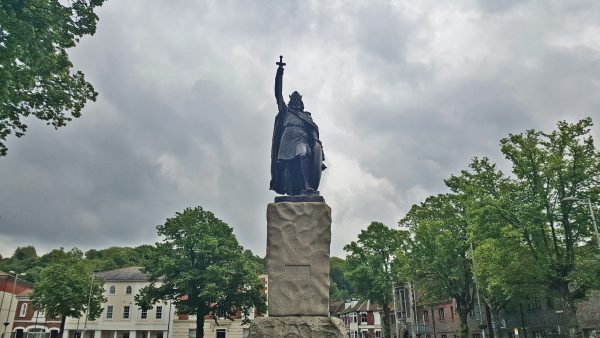 Probably now the most famous image associated with Winchester, is Hamo Thornycroft’s imposing bronze statue, erected in 1899 to mark the 1000th anniversary of King Alfred’s death.

The sword is detachable, for some unknown reason. The image is a Victorian fantasy of what a king should look like, as coins minted during his reign show a very different visage from the bearded man here.

It’s also damn near impossible to get a decent photo of as it’s quite high up, but mainly because right in front of it today is a car park, with cars parked right in the perfect spot for a photo.

What I missed off – and will do on a repeat visit

From London, it’s just over an hour from London Waterloo station to Winchester Station, which itself is about 10 minutes walk from the town centre.

Fares vary, but expect to pay anything from £15-£30 depending on how far ahead you book. If travelling regularly by train, buy a Network Railcard to get a third off the price.