What a mistake-a to make-a!

Is it the silly season already?

I ask as a LibDem councillor has been suspended for going to a fancy dress party dressed up as a Nazi officer – causing cries of outrage from the generic “cries of outrage” lobby. Before you join in though – it is worth noting that this was an ‘Allo ‘Allo themed party, and it would have been a bit daft to have it full of French people and no Germans.

Or are we to censor history, and a big chunk of BBC programming in the 1980s and pretend that there wasn’t a comedy show which made fun of the Germans (and the Brits, and the French, and the Italians) ?

I think this is just a bit of harmless fun which the media has tried to spin into a scandal.

That said, the councillor did put the photos up on Facebook, and that site is increasingly becoming nothing more than a honeypot for lazy journalists looking for a cheap scandal to fill the pages with.

On a lighter note, it’s such a pity he didn’t dress up as the Italian officer, Captain Bertorelli though. He could have read the papers this morning, and cried out, “What a mistake-a to make-a!” 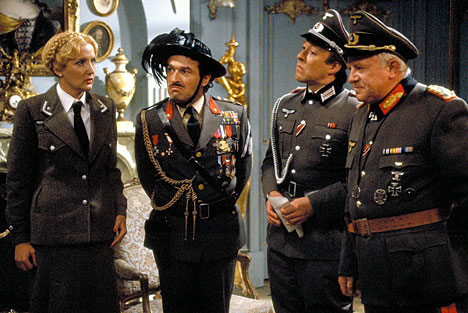