On the opposite side of the Isle of Dogs from where I live is a large blue bascule style bridge (map link) that carries road traffic over the lock admitting river based traffic into South Dock.

One of the busier of the Docklands locks as South Dock is a popular mooring point for visiting ships, especially military visitors, and occasionally I have seen the bridge do the lifting thing.

Today I had my new phone on me so finally caught the thing opening in digital format. 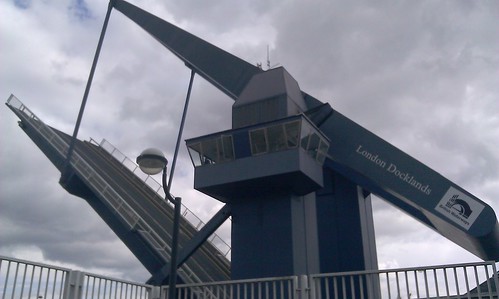 The bridge that sits there today is in fact the sixth bridge to have spanned the locks since they were built just over 200 years ago. 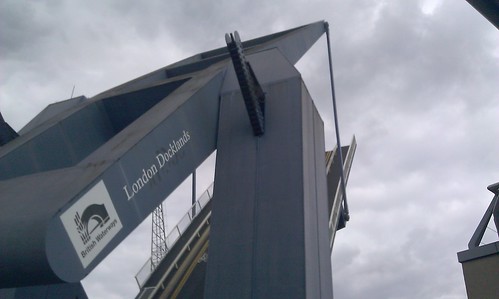 The 1804–6 timber bridge survived until 1842–3, when it was replaced with a cast-iron swing-bridge. Widening of the South Dock east entrance lock in 1866–70 necessitated another replacement.

What had come to be known as the Manchester Road bridge was replaced by the LCC with a wider 55ft-span hydraulic swing-bridge. This was the last of the four LCC bridges to be mounted; the Thames Iron Works Company carried out the work in 1896–7.

The Manchester Road bridge had, once again, to be replaced when the South Dock east entrance lock was enlarged in 1927–9. This new bridge was also moved sideways to sit on the outside of the outer lock gates, as the old locations needed the bridge to be held open for longer than desirable to let boats pass through.

Following a collision and general wear-and-tear, the current incumbent, the ‘Blue Bridge’ was opened on 1 June 1969. The bridge, based on traditional Dutch drawbridges, was at the time, the largest single-leaf bascule bridge in Britain. 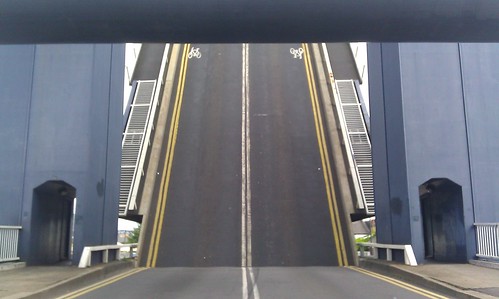