Wellcome to Buddhists, Boning, and Bones

Published 18 November 2015 by Events and Tours

Drums made from human skulls, jewellery from human bones, dogs for supper, and graphic sex — all are an unexpected display of Buddhism at the Wellcome Collection.

Wellcome Collection’s major winter exhibition, ‘Tibet’s Secret Temple’, uncovers the mysteries of Tantric Buddhism, and puts on display for the first time ever a previously secret mural rarely seen by anyone other than the Dalai Lamas. 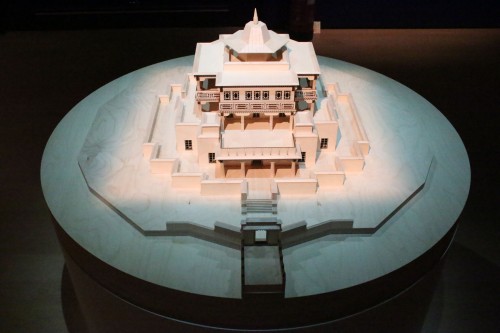 The exhibition starts, and finishes, with the secret mural, starting with the temple it is housed in, the Lukhang Temple in Lhasa, Tibet. Built in the shadow of the Potala Palace, it was a private refuge for the Dalai Lamas to meditate.

Commissioned by the 5th  Dalai Lama, as compensation to a dragon upset by the construction of the Palace, it was mostly used by the 6th Dalai Lama for matters more corporeal, and carnal, than spiritual.

While the temple is unremarkable, at the summit is a private room that only the very highest of the Buddhist order were allowed in, as it contained instructions for enlightenment, which if misread by a novice were thought to be dangerous to their health.

The current Dalai Lama has never seen the inside of the room, as he fled into exile before he was allowed inside, but about 15 years ago it was photographed for the first time for a book, and three of the four walls have now been put on display as full size reproductions, also for the first time. 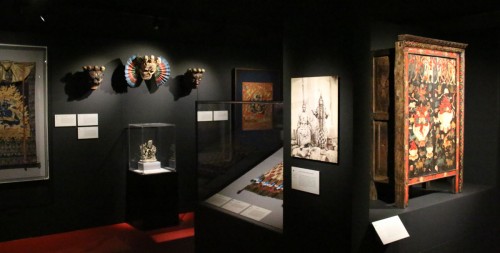 Don’t expect saffron robes and bald heads — this is the other aspect of the belief, the animalistic heritage and the use of icons to represent aspects of humanity and their struggle for peace.

Demonic face masks may look as if they are supposed to frighten or represent the bad side of a battle between light and darkness, but in Buddhism, they are benign representations of the struggle to find inner peace.

For example, on one mask, the skull represents freedom from fear, the flames are wisdom, and the bared fangs show the ferocity sometimes needed to enact creative change within ourselves.

Buddhism also has a somewhat relaxed attitude to death, being but a transition from one life to the next, and mementos which might seem macabre are seen as commonplace.

Human bones used as ornaments are apply displayed here, as is a small child’s drum, made from a human skull cut in half. 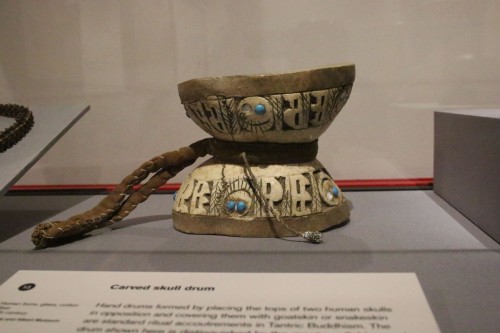 That transition from one death to the next life requires life to be created, and we might be perturbed by the images of copulating couples being attended by the dismembered body of a dead person waiting to enter the womb.

The lights in your bedroom might be off, but there’s a dead person hanging around just in case. 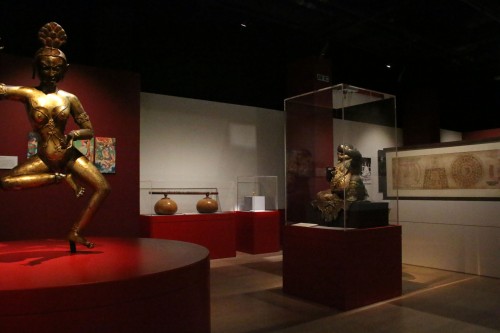 And talking of cases, a remarkable decoration on one shows the pre-Buddhist belief in the five senses, and four of the five meats (dog, elephant, yak and human) being served in upturned human skulls.

Coming soon to a hipster cafe near you? 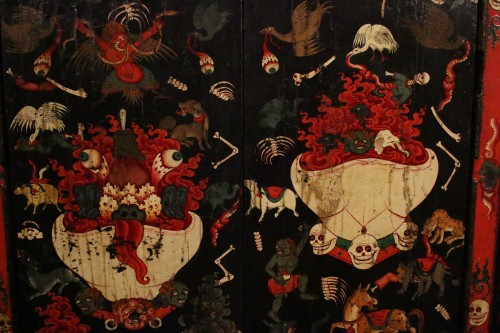 To wash that feast down, a nice ale and take a lesson from Mahasiddha Virupa, who is commonly shown pointing to the sky to halt the sunset — so that he can continue drinking at the tavern.

His prodigious alcoholic consumption, with no apparent ill effects, was taken as a sign of his “transcendence of ordinary reality”, although I think most of us have a different phrase for it. 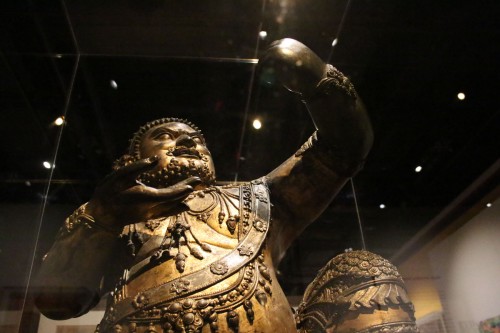 But the secret murals await the heavy drinker, and here is a possible schism building within Buddhism, with the current Dalai Lama promoting openness, and others wanting to keep the secret as it is.

Not just the murals, but also other aspects of the lifestyle.

In a way, its similar to the European reformation, with the division between those who felt the priests were the channel to God and others who felt everyone had a personal relationship with God, and that the Bible shouldn’t be the preserve of an educated elite.

As it happens, the Dalai Lama is very interested in science, and science is increasingly interested in how the meditative process works, leading to collaboration between priests and boffins.

Making the murals public means they can be studied, which is currently almost impossible in Tibet, with the restrictive Chinese government approach to Buddhism. The murals are currently poorly preserved, and covered in glass panels to save what’s left.

Right now, a visit to London is best chance for anyone to see the murals, in any sort of detail.

The exhibition opens tomorrow (19th Nov) and is open until the end of February. Entry is free.

A full programme of events will accompany Tibet’s Secret Temple and there will be a postcard book available, featuring some of Laird’s Lukhang mural details, as well as other selected works from the exhibition.

A book with in depth photos of the mural and their meanings is available here.