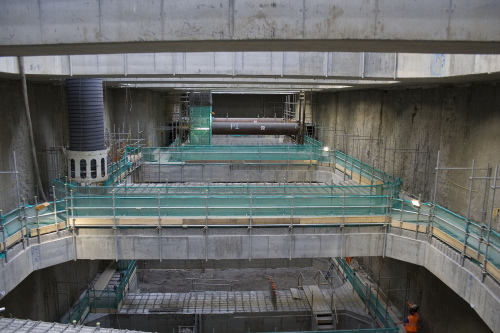 The Central line is to be closed off at Tottenham Court Road station for nearly a year starting January 2015, as the station is rebuilt for Crossrail. Evening Standard

Details of TfL’s plans to close ticket offices in 2015 have been announced, including the first stations that will be shut. LBC

A lightweight train door has completed strength and fire safety testing on the Central Line. Composites World (5th paragraph down)

Crossrail has released some fresh photos of the tunneling works going on deep under London at the moment. IanVisits

HS2 “cannot fail to have a disastrous impact on traffic” in Maple Cross and West Hyde, according to a council leader. Watford Observer

The image above is from Sept 2012: A look inside Crossrail’s construction site at Stepney