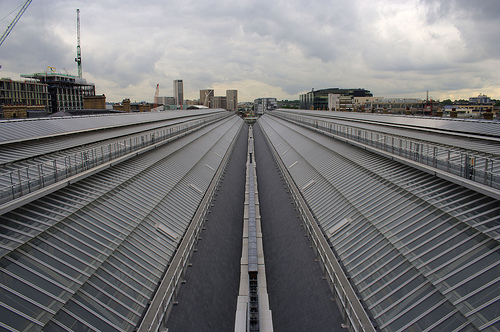 A man was rushed to hospital with life-threatening injuries after he was stabbed outside Clapham North tube station in the early hours of Friday morning. The Voice

A burglary suspect fled from police along railway lines and climbed up into a tree, causing the closure of part of the Greenwich line and widespread trains disruption. News Shopper

Commuters have welcomed a new pedestrian link between stations, which was originally promised almost two decades ago. Local Guardian

Improvements could be in the offing at Gunnersbury Station, after Network Rail gave MP Mary Macleod its support for schemes aiming to tackle the rising footfall at the station. ChiswickW4

Secrets Of The DLR Londonist

On Being Mistaken for a Pregnant Lady on the Tube HuffPo

The image above is from Sept 2013: Photos from the roof above King’s Cross Station