Published 2 May 2014 by Transport News 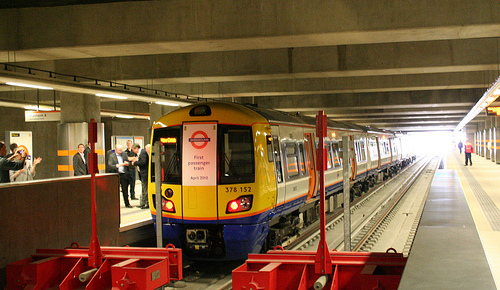 Scorpion scared Tube passengers at Victoria London24 <– Although it turned out to be tiny.

The London Underground is looking to make its tube stations more intelligent after rolling out a variety of devices that communicate with each other via the Internet. CBR

Crossrail managers accused of ‘culture of spying and fear’ The Guardian

A congestion-busting walkway through Shenfield railway station has been backed by transport bosses ahead of Crossrail’s arrival. Brentwood Gazette

A £1.85bn 15-mile tunnel could protect an area of outstanding natural beauty in Buckinghamshire from damage caused by the HS2 high-speed rail line, says a report. BBC News

Bombardier is on course to hit a production landmark by making its 1,000th carriage for Southern Railway. Derby Telegraph

TfL’s Head Office to be turned into residential flats IanVisits

Attend a music concert in an abandoned tube station IanVisits

The image above is from: First Day of the East London Line