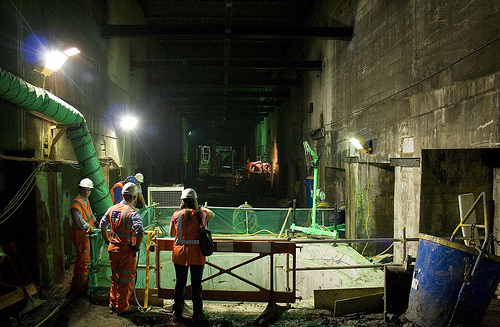 The head of London Underground says he wants to work with designers to create a ‘New Tube for London’ – following the example of Thomas Heatherwick’s New Bus for London. Design Week

London’s mayor has approved plans to order driverless trains for the Underground, prompting one of the Tube’s unions to promise “all-out war”. Financial Times (Google Cache)

The oldest underground network in the world is poised for an overhaul as its operator seeks to capitalise on one of London’s last untapped retail estates. Retail Week (Google Cache)

Photos from inside a Crossrail tunnel IanVisits

A new survey claims that London City Airport is the easiest UK capital city gateway to reach by train, which shouldn’t come as a surprise really, as it is actually the only airport in London! Airport World

Experience: I lost my dad on the London underground The Guardian

Tube staff who volunteered to work during this month’s strike have been awarded £25 vouchers “by way of a thank you” from transport bosses. BBC News

Cleaners on London Underground are to ballot for strikes because their employer, outsourcing giant ISS, is introducing fingerprint technology to book on for work. Socialist Worker

Britain’s busiest railway stations are becoming more crowded. The 10 busiest stations reported an increase in passengers in the financial year to March 2013. The Guardian

Where is the first railway bridge out of London? IanVisits

The image above is from: Photos from inside the abandoned Kingsway Tram Tunnels