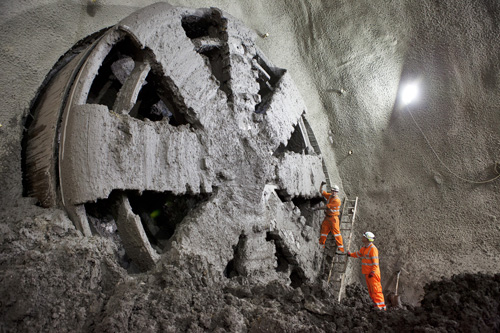 Nearly half of all reported thefts at train stations in Waltham Forest last year occurred at Leyton station. Local Guardian

Stratford should be moved from Underground Zone 3 to Zone 2/3 to maximise the Olympic legacy and improve perceptions of the area, according to a new report. Newham Recorder

The architect behind the acclaimed transformation of King’s Cross station in north London has been parachuted in to work on Crossrail stations as a row over design quality on the project continues. The Guardian

Crossrail Ltd has appointed Julie Leonard as its official artist-in-residence, with a commission to create a pictorial diary of Crossrail’s construction. Construction Index

A Sycamore tree in front of West Hampstead rail station was saved from the axe by a last-minute protection order following a protest. Camden New Journal

TfL apologised to two customers and is carrying out an investigation into an escalator incident at the Cutty Sark DLR station. BBC News

A series of paintings featuring all 267 stations on the London Underground will forever capture the scenes of the city. East London Advertiser

The Victorian proposal for a railway to Westminster Abbey IanVisits

An artist collective is to host their début exhibition in the old offices of Leytonstone Tube station this week. Local London

The image above is from: Crossrail breaks into huge cavern under Stepney