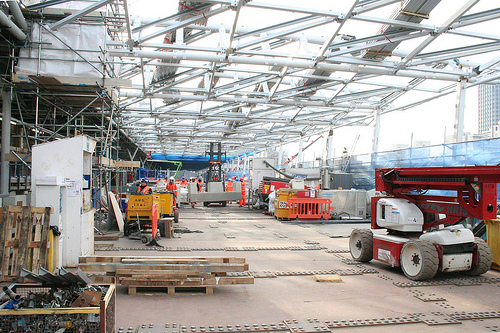 Tube chiefs today came under fire over lengthy closures to escalators as it was revealed that Oxford Circus is the worst hit station. Evening Standard

Transport for London is considering options for a high-rise development above the Bakerloo line tube sidings near St George’s Circus. SE1

The collapse of £354m contract to modernise signalling on vital parts of the London Underground could leave the taxpayer facing costs of £100 million. Telegraph

The Victoria Line was suspended, when a large volume of suspension, in the form of fast-setting cement was poured into the signaling room. usvsth3m And domestic sugar was used to slow the cement from setting Evening Standard

A Window Into Crossrail From the National Audit Office London Reconnections

The first sections of the new-look London Bridge Station are beginning to take shape. SE1

The Supreme Court has rejected a legal bid by objectors of the HS2 national high-speed rail link to force further scrutiny of the government’s plans. BBC News

The RMT union has announced two 48-hour strikes on the DLR in a dispute over pay and working conditions. BBC News

A 63-year-old Romanian tourist who vanished after becoming separated from his son on the Tube has been found safe and well. BBC News

Graffiti drawn on the side of a train as an apparent tribute to the late Only Fools and Horse star Roger Lloyd-Pack brought a smile to passengers’ faces when it was spotted this morning. Ham & High

Greengrassi is presenting Pae White’s fifth exhibition at the gallery in late January. The work is a reconfiguration of an unrealized commission originally planned for Gloucester Road tube station. Artlyst

TfL is now in the final stages of testing its new HTML5 website as it embraces new forms of IT to help meet user demand. V3

TfL was accused of dishing out “another outrageous perk” today after it emerged the children of its top bosses were entitled to free private medical insurance up to the age of 25. Evening Standard

The image above is from: Photos from behind the hoardings at Blackfriars Station