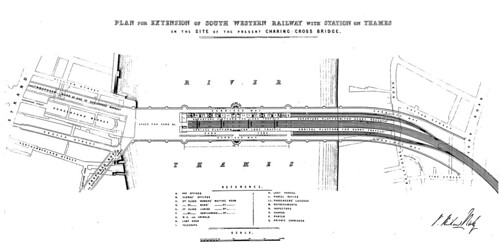 Clapham Junction will be connected to the Northern line, according to London Assembly member Richard Tracey. Local Guardian

Gardeners from West Six Garden Centre have created a display of shrubs at the entrance to Ravenscourt Park Tube station. Fulham Chronicle

The Northern line upgrade will be completed next summer, six months ahead of schedule, transport chiefs have announced. Evening Standard

An art event is taking place in the disused Aldwych tube station later this year. IanVisits

Four companies have been named as bidders to run the Crossrail concession when the service goes live. Rail News

Crossrail is already starting to appear on rail maps. IanVisits

In contrast to the impressive design work that’s going into the Crossrail stations themselves, the surface-level buildings that will be sprouting up above ground continue to be uninspiring. Londonist

Design changes have generated savings of 15% on Crossrail’s Whitechapel station project, according to the project team. New Civil Engineer

A replica of a Heathrow Express train made entirely from cake has been unveiled to mark the 15th anniversary of the airport service. Going Underground

After a lengthy campaign, cyclists will be able to  take their bicycles on Docklands Light Railway trains during off peak times for a six-month trial period starting next week. East London Lines

A “red plaque” has been shown off at Victoria Coach Station to mark the heritage of the transport location. Leon Daniels

A Daventry mum and daughter are planning a charity walk along a London Underground line in aid of Heart Research UK. Northampton Chronicle

New York’s former transport boss has said that the right way to handle Tube strikes is to make them illegal — and put militant union bosses in jail. Evening Standard

Hundreds of Transport for London staff earned more than £100,000 in the last year, the organisation’s accounts have revealed. BBC News