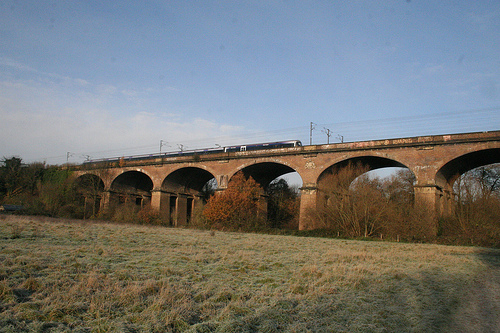 A father-to-be tormented by his fear of noise may have thrown himself to his death in front of a tube train, an inquest heard. Evening Standard

An extra early morning train is being provided between Barking and South Tottenham in an effort to reduce overcrowding. B&D Post (very odd picture of an “overground” train used in the article)

Tomorrow’s Tube: Harrrow-on-the-Hill and the step-free future. The London Underground network has become far more accessible to disabled people put there is still much work to do. The Guardian

Crossrail has completed construction of an emergency access shaft in Holborn almost nine months ahead of schedule. Construction Index

A railway station will be a blaze of yellow in the spring after young people got their hands dirty planting bulbs. Borehamwood Times

China revealed it wants to pour billions of pounds into the HS2 rail line between London and the North. Evening Standard

A look around the London Overground upgrade project IanVisits

A pensioner from Hendon who sexually assaulted a woman while travelling on the Tube on Valentine’s Day has been placed on the sex offenders register. Local Times

Five new train services between Milton Keynes and London are a “welcome step in the right direction”, an MP says. BBC News

Stress, anxiety, depression, fear, tension, respiratory illness, sleep-walking, night-terrors and – in the most extreme cases – death, are among a list of possible “health outcomes” from HS2. West End Extra

Tomorrow’s Tube: deeply boring. How much more underground rail transport in London is possible? The Guardian

Boris Johnson backtracked on plans to put up the cost of travelcards today as he indicted they would be frozen as a result of the Chancellor’s autumn statement instead. Evening Standard

This week in 1939: protective works on underground railways The Engineer

A look at London’s tube and rail upgrade plans IanVisits

The image above is from: Photographing the Wharncliffe Railway Viaduct