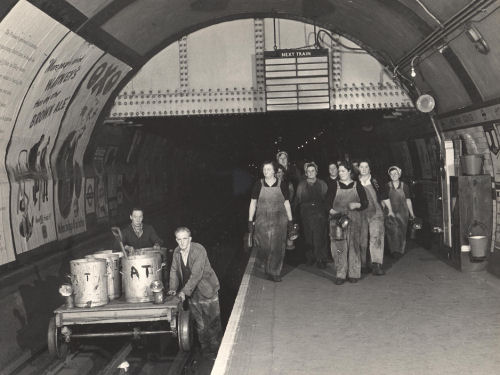 London Underground Fluffers in the 1950s

The recent consultation held by (TfL into the Piccadilly line service at Turnham Green tube station has received over 14,000 individual responses. ChiswickW4

Would you breastfeed on the tube? The poet Hollie McNish would… London24

Frustrated commuters were left furious after an escalator at a Tube station broke down three times in three months following a £1.6million refurbishment. Islington Gazette

Crossrail is not just about engineering: artists, designers and archaeologists are all involved in the £15bn new railway. The Guardian

Epsom’s MP has assured residents that a new electronic smartcard will be introduced at its station within the next few weeks, despite the claim not being confirmed by the train company. Local Guardian

A fire at London Bridge station on Tuesday sparked commuter chaos across the capital. Evening Standard

A young woman has been detained under the Mental Health Act after trespassing on the railway tracks at Astead station. Local Guardian

South West Trains has confirmed the impending arrival of 10-carriage trains on the mainline that passes through Putney, Wandsworth Town, Clapham Junction and Queenstown Road stations, with more to follow early in 2014. NNet-Server

TfL has donated over 500 brand new toys left on buses, tubes and trains to charity, exactly one month before Christmas. LBC (They should put put a supply of lost brollies in each station to let people help themselves if caught out by the rain)

A thief who brazenly snatched mobile phones out of the hands of Tube passengers has been sent to prison. Wharf

Andrew Cave considers how major infrastructure projects battle to win the hearts and minds of local communities and politicians. CorpComms

Boris Johnson is planning a new agency to revive the area around Old Oak Common, where the High Speed 2 and Crossrail routes will converge. CityAM

Dr Who and the Curse of the London Underground IanVisits

The image above is from: Your night is my day: London Underground never sleeps