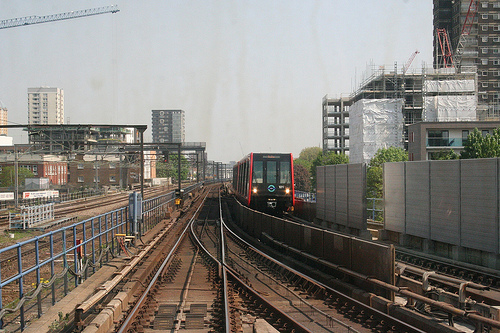 Northern Line and Bakerloo Line trains wont be stopping at Embankment Station for most of next year (2014) due to a major overhaul of the escalators. IanVisits

Wheelchair passengers are calling for the return of a ramp to a tube station after transport bosses withdrew the vital facility on ‘safety’ grounds. Kilburn Times

Union leaders have called for an investigation after the doors of a packed Tube train opened between stations in West London. ITV

Work is starting at the Ilford train depot to turn it into one of the biggest yards for the new Crossrail line. Illford Recorder

Will Stirling assesses how Building Information Modelling (BIM) is helping the project both stay on budget and reduce whole life costs. The Manufacturer

British Transport Police have launched an investigation after a train could have been de-railed as it hit a concrete slab placed on the railway tracks. Richmond Times

London First has published a report calling for a step-change improvement in rail access to Stansted Airport. Press Release

A section of the HS2 high-speed rail link in west London will run in a tunnel, the government has said. BBC News

A 28-year old who used a blow torch to try stealing cash from eight DLR ticket machines has been jailed for 16 months. News Shopper

A security review has been launched on London’s transport system in the wake of the Kenya terror attack. Evening Standard

More contracts, details of expenditure and ‘most requested’ data to be routinely published on TfL website. Press Release

The image above is from: Sitting in the driving seat on a DLR train