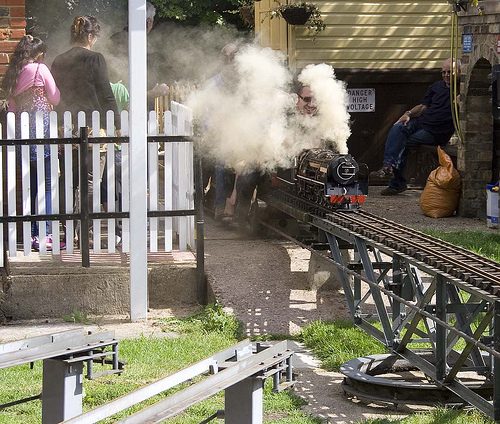 Take a ride on one of London’s miniature Steam Trains

The Victoria Station Upgrade project will provide one of the best examples seen so far of how Building Information Modelling (BIM) can be used in ground engineering. BDC Magazine

Transport for London lays out its innovation roadmap, says network-wide Wi-Fi is a priority TechWorld

Ongar station could be reconnected to the London Underground after the idea was put to the Mayor of London. Brentwood Gazette

Southern Railway is to cancel 341 trains a day in a revised timetable from next Monday, the company has announced. LBC

New trains for the Fenchurch Street-Southend line coming into service later this year are being built with “walk through” corridors between carriages, East London Advertiser

The government is being asked by an MP when it will step in to take over control of Southern, whose rail services he says are at “rock bottom”. BBC News

Sevenoaks MP Michael Fallon is warning commuters more work is needed to secure the extension of the Oyster network to the town. Sevenoaks Chronicle

Passengers on the UK’s oldest airport express rail link will discover from 11 July that the long-established timetable has turned into something of a lottery. Independent

TfL is shaking up the way it delivers future construction projects by merging its two main engineering arms as part of a cost-cutting drive. ConstructionNews (£)

The Transported by Design Festival, a one-afternoon extravaganza to celebrate all that’s great and good in transport design. Diamond Geezer

And finally, a “replacement” train service is being offered by a narrow gauge railway between two remote villages in southern Scotland during a road closure. BBC News

The image above is from April 2016: Take a ride on one of London’s miniature Steam Trains