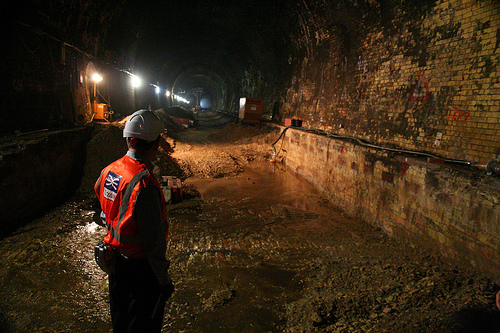 A man who sexually assaulted a teenage girl at a Tube station has been handed a suspended prison sentence. Local London

A new type of sleeper has been laid on the London Underground’s Metropolitan Line. Construction Index

The Unite union has dropped its allegations that Crossrail contractors were blacklisting union activists from working on the project. Press Release – Union opinion

Work on the refurbishment of a Victorian tunnel for reuse as part of the Crossrail scheme has been completed ahead of schedule. Construction Index

CCTV footage was released of a man shoving a luggage trolley onto the tracks at Euston Station ahead of a train arriving. YouTube

A dead dog lay on the railway tracks near Petts Wood station for four days, as Network Rail ignored a family’s pleas to retrieve her. NewsShopper

A collaboration has been announced which will oversee the project to allow fast train services to operate between Oxford and London Marylebone. The first services are expected to start in two years time. Press Release

With the IoD and a wave of Labour politicians bashing HS2, Nigel Cooper argues it is essential for the UK’s development. Management Today

Go-Ahead has been forced to withdraw from a competition to run DLR services at the 11th hour after parting ways with its French joint venture partner. Telegraph

Eighties star Kim Wilde was mortified when she saw film footage of her drunkenly busking on tube train last Christmas as she had no idea the clip would be such a hit on YouTube. Star

Crossing the periodic table with a London Underground map highlights some key characteristics of the chemical elements. The Guardian

Kingston station’s 150th anniversary – and the myths around it – should not go unmentioned. Kingston Guardian

The Myers-Briggs Type personality test applied to each of the tube lines based on their Twitter feeds. Some Fools Notion

The image above is from: More photos from inside the Connaught Tunnel