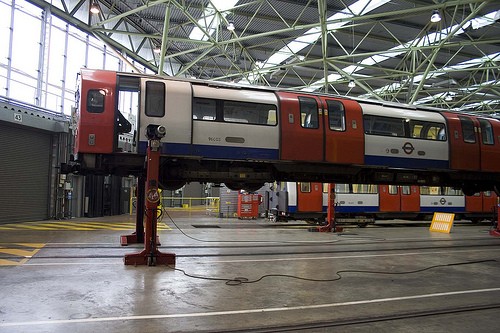 If You Caught the Tube Last Friday, You’re a Record-Breaker Gizmodo

A Muslim Tube passenger has reportedly been forced off a train after a commuter accused him of using an iPad suspiciously. Independent

Not far from Paddington can be found a small, but surprisingly important part of the Crossrail project. IanVisits

Rail 787: Heathrow Express and Crossrail – the need for a fat controller Christian Wolmar

Crossrail will be on time and budget thanks to Olympics training, says Ashtead chief Evening Standard

Boris Johnson has announced the creation of a new company which will oversee all future development and, subject to funding, construction of the proposed Crossrail 2 rail link. MayorWatch

The Heathrow Express can no longer claim it runs “every 15 minutes” after a customer complained that the frequency drops to once every 30 minutes late in the day. Telegraph

RMT announced that there will be a series of strikes on the DLR next year, as part of an ongoing dispute over working practices. CityAM

Oyster has all but replaced physical tickets and cash in London, but what’s the technology behind Transport for London’s iconic card? Alphr

And finally, train conductor takes his job to new level as he conducts university choir on board his tube Mirror

The image above is from October 2012: A look around the Jubilee Line train depot at Stratford