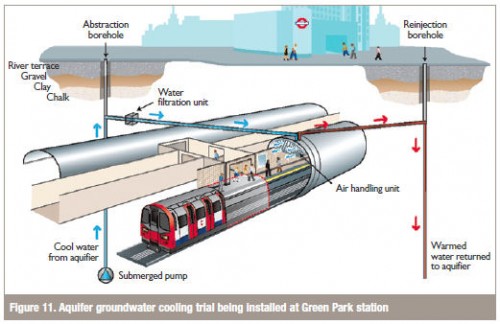 Plans to build an extension to a Tube line further in to South London will be consulted on again after alternative routes were suggested. South London Press

Neighbours are objecting to the new ‘freight train’ like noise created by Victoria line trains running under their homes. Local Guardian

Tube overcrowding delays: which lines are the worst offenders? ITV

An investigation is under way after a train passenger was trapped in train doors and dragged along the platform in Hayes. GetWestLondon

Commuters using a London Midland train were evacuated at the peak of rush hour, after a carriage caught on fire. CityAM

Peak-time emissions from diesel trains at Paddington Station exceed the European recommendations for outdoor air quality, and are higher than nearby roadsides on the majority of days. Press Release

A Plan to Replace London’s Tube With Moving Walkways Wired

A special Southeastern high speed poppy train will run an exclusive one off service ahead of Remembrance Sunday in November to raise money for the Royal British Legion. UK RailTours

The image above is from Feb 2012: Green Park tube station to get groundwater cooling system