Watching the A1 Tornado Steam Train arrive at King’s Cross

Update: The train will be returning to London on the 15th Sept – details here.

Today I wandered over to Kings Cross to watch the A1 Tornado steam train make its inaugural commercial trip – and into London. Got to the station at about 1pm, for the 1:47pm arrival and platform 1 where the train was due to arrive was already packed to (near) overflowing.

This was going to be a big crowd.

I met a friend at the station, and we decided to risk going up to the very end of platform 4 to get a view of the train arriving – only to find that about 30 people had already had the same idea – on each of the platforms.

OK -this was going to be a very big crowd. 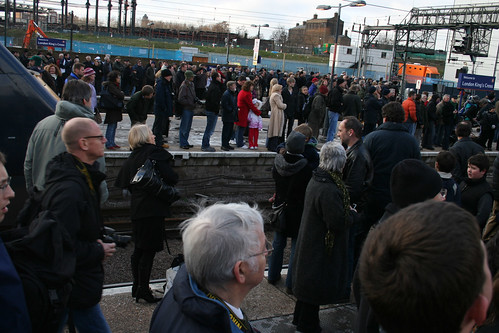 As it happened, the train was running late, and ironically for a steam train, the delay was caused by electrical problems at Peterborough – so we hung around on the cold platform slowly edging to the front of the platform. As we waited a train pulled into Platform 4 where we were standing (although not blocking the view) – and there were fervent prayers that it wouldn’t be departing the moment the steam train arrived.

Shortly before the Tornado arrived though, a modern train pulled into Platform 2, so anyone waiting there for a view of the steam train would have probably be uttering very unprintable comments.

As the anticipated time of arrival came closer, heads kept craning out to see if the train was visible yet – cameras all held at the ready – and then suddenly the engine appeared out of the tunnel and there was an almost audible gasp as people started snapping like mad, or filming with their video cameras this iconic arrival. 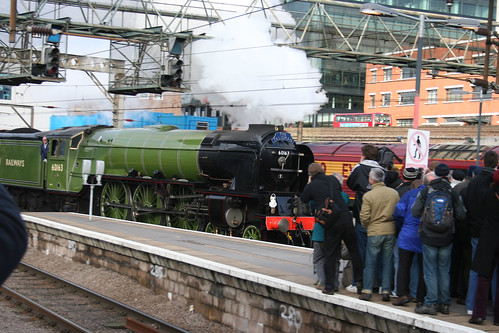 With gushes of steam and a blast on the whistle, the train thundered into the station, pulling a long line of old passenger carriages. Many of the people on board waved to the welcoming crowd, and we waved back in delight.

I tried to wander down to the front to get more photos, but the station was busier than the Chinaware department in Harrods on the first day of the sale – so after manfully struggling to get some photos, I decided it was time to head home. 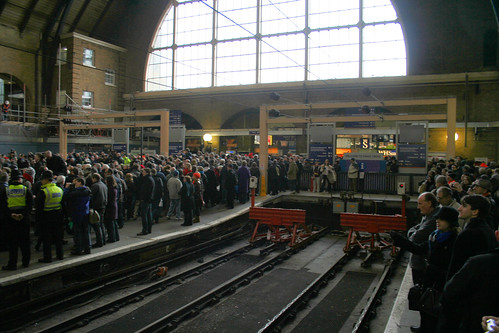 It was really great to see this magnificent beast arriving at Kings Cross, and while the crowds meant I couldn’t get a perfect position to watch – in a way the size of the crowds was itself wonderful as it indicated just how many people are fans of these living engines. 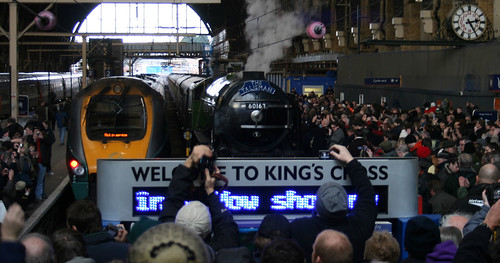 According to a TV news clip, the train will be stationed at Old Oak Common Depot for the next week – until it does a Valentines Day trip. According to the organiser’s website, it will be leaving Waterloo station at 9:40am on Sat 14th Feb (returning at 4pm) – and then doing an evening trip from Victoria at 7pm and returning at 10:30pm.