Published 15 December 2015 by Events and Tours

What a lovely way to start Christmas as we can — weather permitting — watch the International Space Station pass overhead on Christmas Eve.

Those of you with children might even be able to persuade them that the bright star zooming overhead like no other is none other than one Father Christmas out on his annual duties.

Of course, seeing the space station is weather dependent, and worryingly, early forecasts do not look hopeful.

There are two flypasts, and awkwardly, sunset is just after the better of the two, but it should still be visible as the “star” is quite bright, and indeed, might be easier to see due to the lack of other stars in the sky.

However, assuming that all is well, what you want to do is find a nice place with a decent view of the sky — a park, or anywhere above the local street lighting level will do.

It should become visible around about 3:40pm, depending on how much of the horizon you can see, and pass right overhead just after 3:44pm.

To see it, face directly to the West no more than a couple of minutes before it is due to arrive to get used to the dark sky — then watch out for a single bright star flying in a straight line directly towards you and overheard. That’s the space station. It takes a moment to spot it, but once you do, it becomes very noticeable.

You should be able to watch it for a minute or two as it flies over.

Technically, the space station passes to the south of England but because of its height, on the first flypast, it will appear to be only slightly to the south of where you are standing. The second flypast is over Portugal, so look further to the south of the night sky to see it.

Don’t forget to give a wave to the astronauts, including Britain’s own Tim Peake. 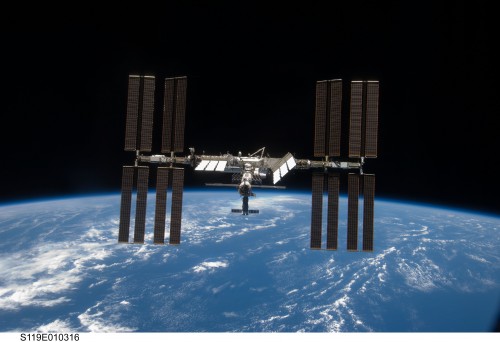 Note — the ISS will be visible from MOST of England on the first of the two flypasts, and the flypast last a couple of minutes over England, so the times are as above, give or take 10-20 seconds. Obviously, if you are north of London, you will need to look further the southern half of the sky above.