Watch a steam train run though South London (and Kensington)

A steam train will be making a loop through South London tomorrow (19th June) – with a diversion through Kensington Olympia – and as it will be one of the longest days of the year, you should be able to see as much in the evening as in the morning.

The steam locomotive, the Stanier 8F 48151 was originally designed for hauling heavy freight and is now used to haul passengers on day trips. Although, as we humans are somewhat larger than 60 years ago, maybe they need a heavy freight locomotive to cope?

The charter train (for which tickets are still available) will run in from Aldershot, through London (via Catford) and down to Canterbury. There it loops through Margate and Gillingham, back through South London (via Herne Hill) and then through Kensington Olympia for a turn around before heading out to Aldershot.

I have turned the Network Rail timetable into a map with estimated times as it passes some key stations.

It’s a nice one to look out for if you are in the area.

Curiously, a few of the locomotives of the same design were sold to the Egyptian railway and two were on a cargo ship that was sunk following an attack by German planes during WW2, and are now a well known tourist attraction – as a Red Sea diving site. 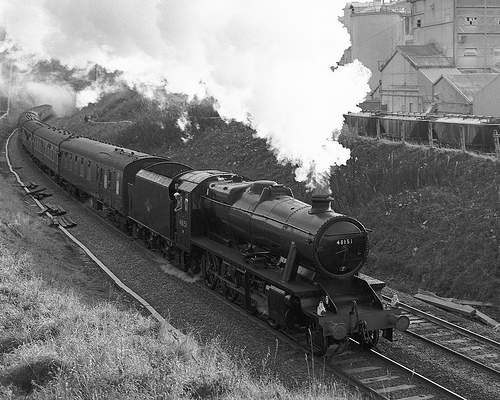 Photo by Ingy The Wingy