Wassailing at the Bankside

Published 3 January 2011 by By Ian Mansfield Events and Tours

If slow to arrive is the Holly Man, slow shall spring be too*

*a fake made up saying

Circling around Bankside in a powered boat, the Holly Man – a chap decorated in the traditional garb of the Green Man’s winter incarnation was a tiny bit late in arriving at Bankside to set off the now annual Twelfth Night celebrations. Hopefully, his late arrival isn’t a harbinger of a long winter.

Nonetheless, having arrived and clambered out of the Port of London boat, he was greeted by Beelzebub carrying a flaming torch to light the way and proceeded to toast the growing crowd with wassails and blessed the river. 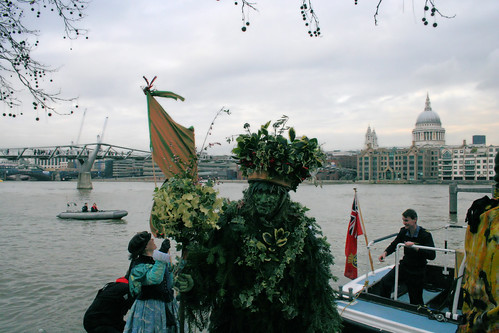 A traditional blessing of the Apple Tree to bring good fortune, although in this case the Apple tree was a small sapling in a plant pot rather than a large tree which could be beaten to wake its winter slumber.

I don’t think a full grown apple tree would be a sensible idea in a tourist hotspot – just think of the mess as people trod on the windfalls! 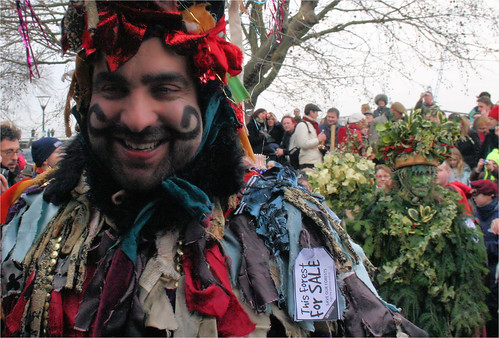 The Bankside Mummers then processed along Bankside to the pier and here laid on the traditional winter mummers play of a fight with St George, his slaying and resurrection and the handing out of the King Bean and Queen Pea cakes.

The play is the main part of the celebrations, and involved a lot of contemporary political references, which raised a wry smile from some, and outright laughter from others. 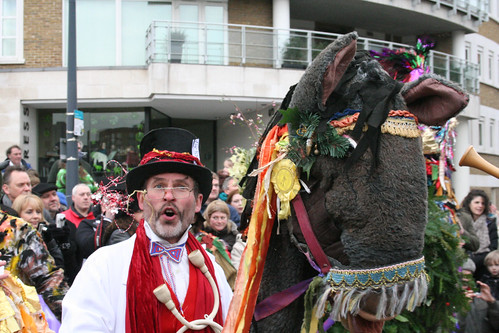 I left as the cakes were being handed out – to escape the risk of being crowned the king for the day!

Thanks to The Lions Part for staging the event.

More of my photos at the usual place.

Other 12th Night celebrations in London:

The Geffrye’s traditional burning of the holly and the ivy, carol singing, stories about Epiphany, and a taste of mulled wine.

Come and enjoy a glass of wine punch and a pie, listen to Georgian era music

Addendum: When I take photos of events, I tend to take my photos then get out of the way so other people can do the same. What I don’t do is turn up late, and barge past people knocking them out of their long-reserved vantage spot by the river bank. Sir, you may have a fancy camera, but it doesn’t excuse such crass rudeness.