Prompted by a comment on Annie Moles’s blog about sarcastic warning messages on the tube network I was reminded of a thought I had yesterday about the perpetual audio warning messages which pervade the transport system today. 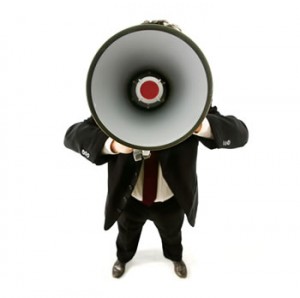 I was sitting on the DLR coming back from Greenwich, when I noted the usual instruction to “take all your belongings with you” appended to the advisory about which station we were approaching. As Diamond Geezer has noted on many occasions (I think it is a bug-bear of his), are people really going to deliberately leave stuff behind and then change their mind when the audio warning is played?

It got me wondering.

We are getting increasing quantities of these warning notices all over the place and they are blending into background noise which people increasingly ignore. For evidence that people ignore them – try getting off a tube train at Canary Wharf in the evening after a dozen messages to let passengers off first. Trust me, you wont find a welcoming corridor make available by commuters decorously standing back so you may depart in comfort. It’s more like trying to get to the china department in Harrods on the first day of the sale.

Despite anecdotal evidence that the audio messages are being ignored – we are getting more and more of them.

Question – has anyone ever done a proper statistical study into their effectiveness?

I would be very interested to see the results of a study carried out over say, a month on a tube line – where the “take your belongings with you” message is switched off and to see if it actually resulted in more rubbish being left behind (I’d ignore the free newspapers comics they hand out as people leave those behind deliberately).

If indeed there is an increase in negligence, then fair enough – but somehow, I rather suspect that there won’t be. So, lets have a proper study carried out (or the results of the previous one published), and we can see if there is a valid reason for all these damn warning messages blaring at us all the time.