Published 29 October 2009 by Events and Tours

A functioning church might not seem like the most obvious place to watch a horror movie about werewolves, and certainly not to drink alcohol in the pews, but that is the concept behind a series of cult film nights that started this evening.

While absolutely a publicity stunt by Jameson Whisky, who am I to complain when they hire a venue, put on a film and supply the drinks – all free of charge?

Nonetheless, the choice of a Gothic style church as the venue was inspired, and my love of cult movies was amply sated.

Although they have a few films on this week, I opted for An American Werewolf in London as it is a favourite of mine, and it had been ages since I had seen it.

Also, as a bit of a tube geek, I was particularly keen to see the tube scene in the film and see where it was filmed, as I couldn’t really remember the details. Impressively, it wasn’t filmed in a derelict station, but in a pre-mosaic Tottenham Court Road – although the victim seemed to leave the Northern Line platform and walk down the Central Line corridor. I guess that is Hollywood for you.

Also, considering it was set in a late night empty tube station, a digital clock was seen noting that it was actually just after lunchtime! One thing that came out from the chase scene down the corridor is how almost every inch is covered in adverts. If you think the tube is ad-heavy now, it is nothing compared to the late 1970s.

The film is a semi-comedy, although some of the more serious parts are now just hysterical to watch as they are acted straight, but just come across appallingly badly to our more jaded ears.

They have a few more film nights coming up, and you can still reserve tickets via their website.

There is quite a long wait between getting in, and the film starting though, so be advised about that, and I didn’t notice this until I was sat down, but the upper pews are also open and they might offer a better vantage point.

Tomorrow (Fri) is Dracula with Christopher Lee, and considering the difficulty faced by vampires with Christianity, I suspect that watching Dracula in a church could be quite a good, and slightly bizarre, experience. 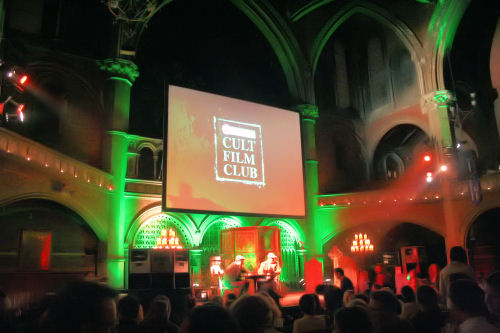 Next month I am off for an evening of horror films being shown in the Petrie Museum, actually amongst the old Egyptian relics. Wonderful!

1 Pings/Trackbacks for "Werewolves and whisky"