Being a moderately signed up geek, I am quite keen on Doctor Who. Unlike some people I know (glares!), for me, it is just a bit of light entertainment, not The Meaning of Life as some seem to treat it. 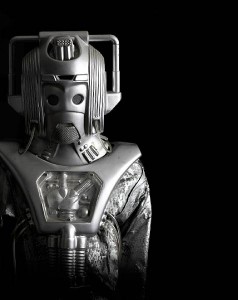 Also, slightly heretical, but I prefer the pre-2005 episodes as they had a lot less special effects and generally more interesting plots!

However, I was still rather excited to see that Bonhams is going to sell off some of the BBC’s Dr Who memorabilia – which usually means public viewing days to have a look at the goodies. As usual, I can’t afford to buy anything, but I can go for a look.

Although public viewing days for auctions are normally free, this time they are being charged for – I guess Bonhams guessed it would be rather popular and spotted the opportunity to cash in on it – damn!

Still, you do get the catalogue to keep, and sales catalogues do tend to be rather good quality – expect a lot of glossy photos and history about each prop.

The viewing days are:

More details on the Bonham’s website – the auction house is on Montpelier Street, just across from Harrods.

I think I might try to go on Monday – as I suspect the place will be PACKED on Sunday with lots of adult-sized children oohing and ahhing over the props.

NEWSLETTER
Tagged with: bonhams, Doctor Who