Published 24 May 2014 by By Ian Mansfield History, Underground London

Yet it is open every day and any one can walk through — if they are foolish enough to do so, for this is the Rotherhithe Tunnel and it is a smoky realm of noxious fumes and carbon monoxide monsters.

When the much older Thames Tunnel was opened in 1843, the original plan had been for it to be used by horse and cart for cargo deliveries between the two sides of the Thames. That never happened as they never raised the money to build the huge ramps needed. So, in 1900, as the need still existed, another tunnel was dug, and it opened in 1908 as the Rotherhithe Tunnel.

Used for horse and cart as intended, it has long since been superseded by the motorist with significantly greater horsepower than their predecessors could have imagined possible.

There used to be four routes into the tunnel for pedestrians, but two were sealed off during WW2, leaving just tile covered staircases at either end.

One of those staircases happens to be just across the road from Rotherhithe Station, so while excited people went into the railway station, I cross to the otherside and descended down to a very different environment.

The road tunnel runs over the railway at this point, and you can just about see the iron supports for the railway as it ducks under the road. 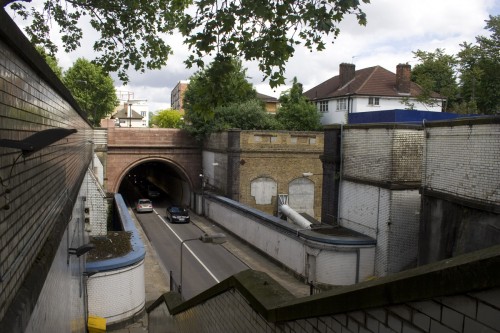 Down here in the cutting the cavernous mouth of the tunnel looms large, yet few motorists probably even notice the decoration on the frontage nor the grand text above announcing the equally grand opening of the tunnel. 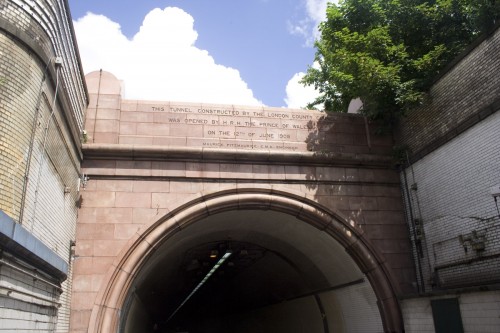 Going within though, now you are within the realm of the motorist. A narrow pavement runs along the tunnel. Always for pedestrians, who lead their horse and carts to market down these tile lined tubes, and now more often used by cyclists.

It’s probably the only place where cyclists are encouraged to cycle on the pavement, as I once learnt on a cycle down here, the motorists really do not like you to be on the road. Really, not at all — the road is too narrow for them to overtake you. 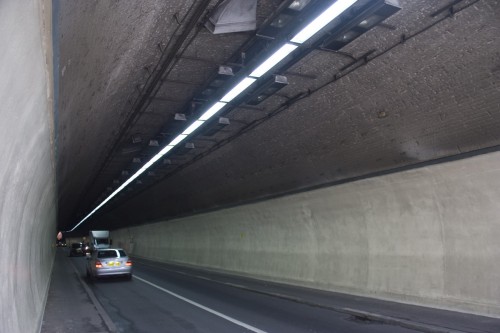 One of the quirks of the tunnel is that it isn’t a straight line from one side to the other, but regularly turns corners — allegedly so that horses going inside wouldn’t see daylight at the other end and bolt down the tunnel to escape.

It is at these corners though that you can also find some of the hidden marvels of this Edwardian era tunnel.

Here is a giant ventilation shaft. Driven down from the surface in much the same way as the earlier Thames Tunnel, there are in fact four such shafts along the tunnel length. 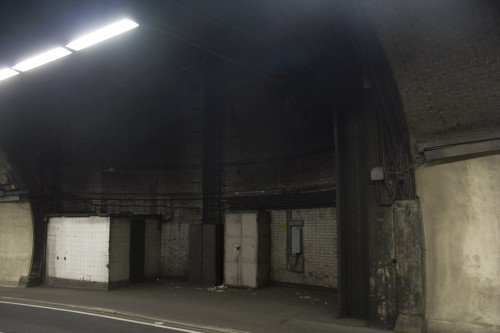 Wandering along the pedestrian path, the occasional face could be seen in cars passing by looking quizically at the strange sight of a pedestrian in the tunnel. In fact, I nearly worried about the venture myself, for about a quarter of the way along I started to feel really quite light headed and queasy, but a moment of composure, and on with the adventure. 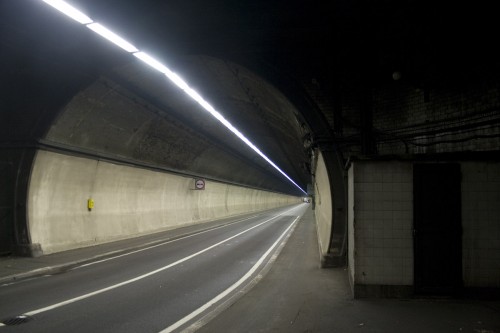 For it the second of the shafts within this noisome tunnel that is the first of the most interesting. Yes, that is an ornate staircase running up, and indeed, when originally opened, this was one of the two since closed ways into the tunnel. 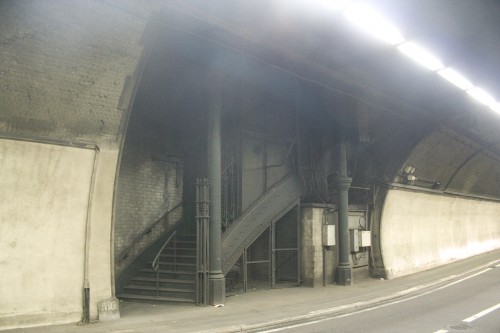 Two red-brick round buildings next to the river on either side of the Thames were decorative structures and offered a spiral staircase down to the tunnel below. They were closed following damage during WW2, and thanks to the displacement of pedestrians below by the motorcar, there has seemed to be no incentive to restore them. 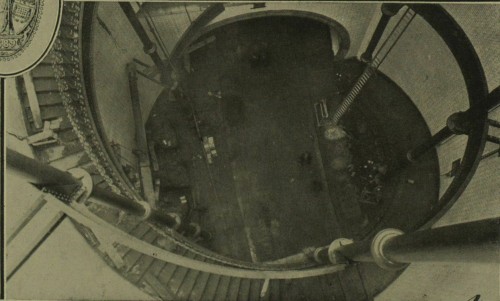 Photo from the Illustrated London News

Back down below, the staircase has also been blocked off with a steel door, and a curiously positioned sign warning not to loiter due to traffic fumes. Are the fumes any worse at this location than elsewhere in the tunnel? 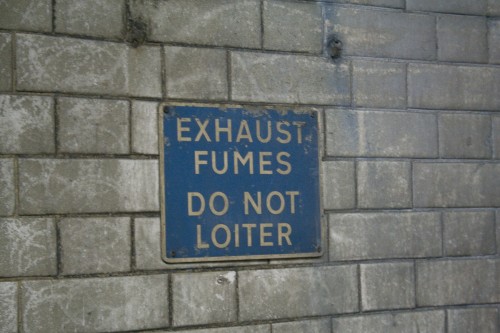 However, despite the warning sign, this little remnant of a staircase is one of London’s hidden wonders and rarely noticed by the thousands of motorists who pass it every day.

The second of the shafts past, we are only now finally entering the long straight length of tunnel that runs under the Thames itself. A long unremittingly dull walk. Footstep after footstep of dull grimy tile cladding monotony. 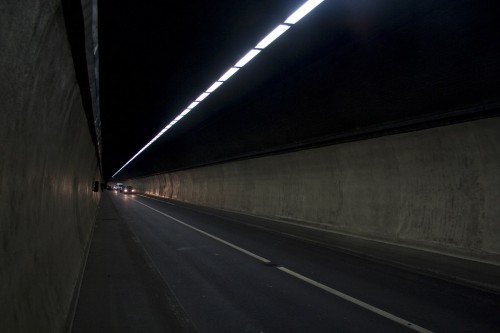 Yet down here is also the half way mark, although not marked at the exact half way point.

But, visual respite eventually comes, in the third of the shafts, and the northern counterpart to the spiral staircase we passed an age back. Again the staircase is sealed off, although you can get a bit closer to this one as the metal fence is either missing, or never put in place. 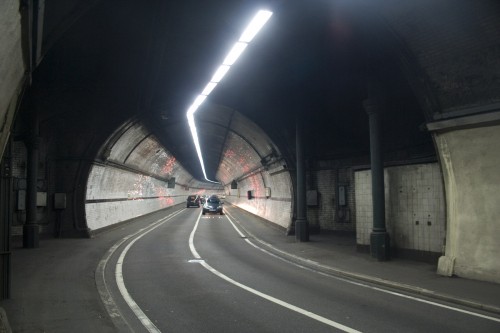 Here the tunnel also takes on a new aspect, almost as if the Northern side wants to be different from the Southern. Where that was several straight lengths with sharp corners, here all is long winding curves. 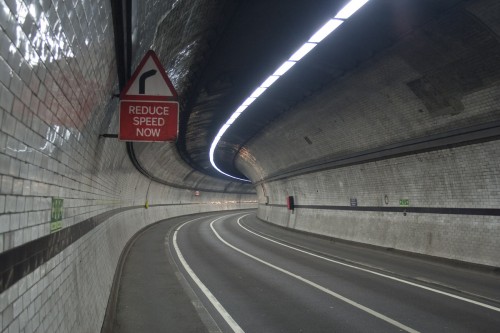 A long undulating curve to the left that ducks under The Highway and leads to the last of the ventilation shafts, and one designs solely for that purpose. And then a wide arc of a curve to the right, and at last you can start to see daylight in the distance. 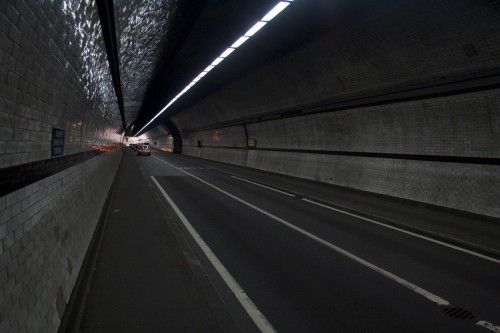 And eventually, out into air that is as polluted as London air is, yet feels a blessing of sweet countryside freshness by comparison to what has been endured within. 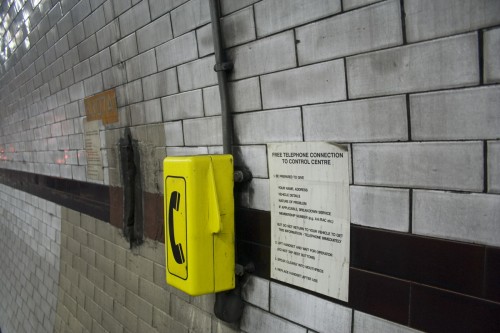 An estimated 20 people per day walk down this tunnel, and hardly any more could want to.

It’s noisy, dirty, unpleasant, polluted… and therefore, quite obviously, every Londoner should do walk though it at least once. 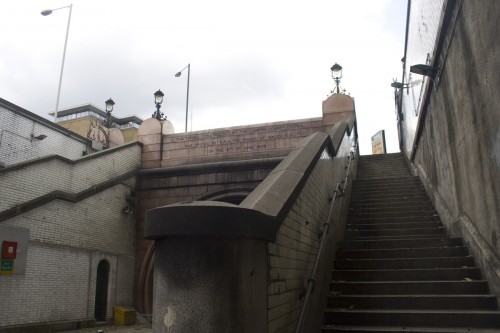