Published 13 March 2010 by By Ian Mansfield Events and Tours, Museums

Yesterday, along with several hundred other equally excited people during the day, I finally got a chance to walk along a bit of train tunnel – yes the famous Brunel Thames Tunnel that had been the topic of much news reporting over the past couple of days.

Turning up to Rotherhithe Station with tickets in hand, there were four handwritten signs on the windows warning that the tours were sold out. It seemed that earlier in the morning, the BBC had said that tickets were available, leading to a flood of soon to be disappointed visitors arriving clutching banknotes in the hope of a peek.

Also thanks to the somewhat anger inducing ticketing website operated by the LT Museum, there were people who thought they had booked a tunnel tour, but had actually only got tickets for the Victorian Fair and were being politely, but firmly told they couldn’t go down the tunnel. Even after I booked my tickets, I wasn’t 100% sure I had got what I thought I had asked for until the tickets arrived in the post and I could relax a bit.

After the usual health and safety warnings about trip hazards and what to do if the lights go out (stand still) or an evacuation was needed (stand still), or feeling ill (stand still), we were handed over to our guide for the evening. A jolly chap from Chicago who only started working for the museum earlier that week. Not a bad start to a new job – take the first walking tours through a tunnel in some 145 years. 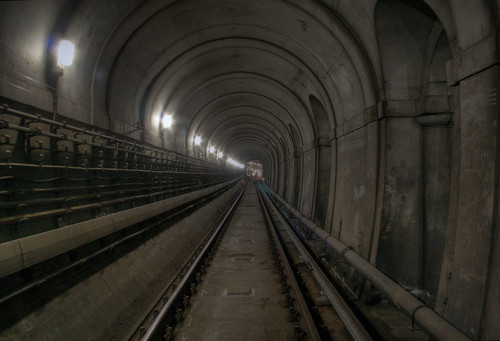 I am sure most people know the history of the tunnel – or you can look it up – so I won’t recount the obvious here.

Slowly going down the tunnel, though we passed from the preserved original brickwork into the newer concrete shield that was applied over the bricks when the tunnels were last modernised, rather controversially in 1995. I have sympathies with both sides of the argument, and in an ideal world, the tunnels should have been restored – but then again, why spend a fortune on brickwork that frankly, only maintenance staff would ever see?

So down the tunnel, as it gently sloped under the river, punctuated with short breaks for a bit of history, and then slowly back up again to stand in the very centre of Wapping station in a spot that would be most unwise at any other time. 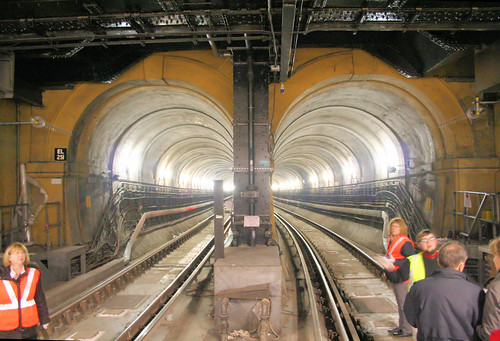 There were strict rules about not stepping on the rails, so small “bridges” not only took us from one side to the other, but also offer elevated platforms for photography. As an aside, we walked northwards on what is actually the southbound rail track – and visa versa on the way back. 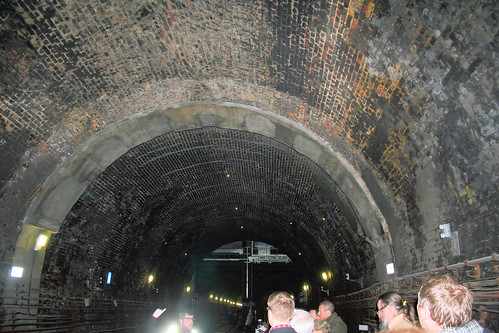 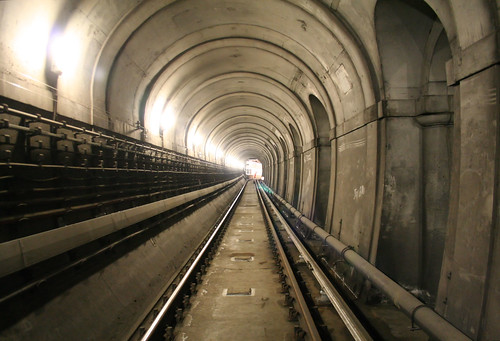 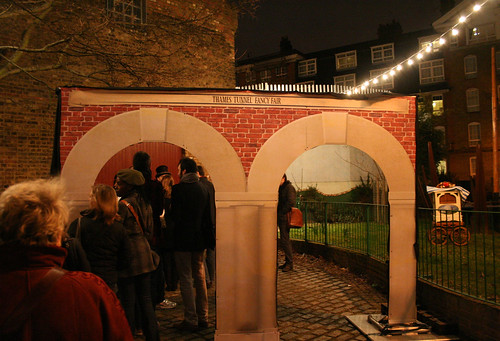 The museum curator gave a long, and innuendo-laden speech about the history of the tunnel and regularly reminded visitors that today was the first time in 145 years that anyone had been able to stand in the shaft itself. Apart presumably those of us who had a look inside last year?

Brunel’s shaft is currently being converted into an extension for the museum, which will roughly triple the amount of space they have for displays, hopefully turning a small incidental museum into a serious destination in its own right. 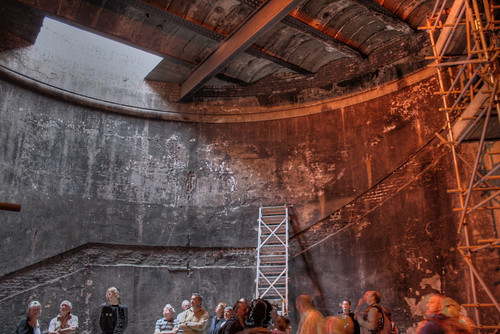