Vote for the Battle Bus!

The Transport Museum’s restored 1914 era Battle Bus, which was among many that were sent to France during WW1 is in the running for a prize.

Restored in 2014 in its original red and cream livery, in September 2014 the bus was converted into a military troop carrier to commemorate the role of London’s transport workers during the First World War. 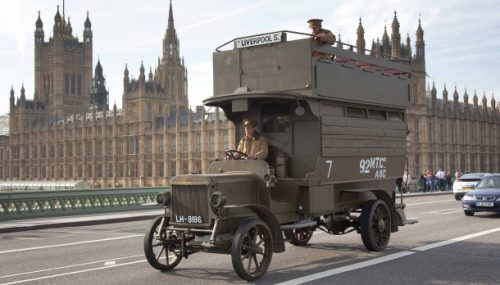 The Battle Bus project has now reached the final of the National Lottery Awards 2016 after being shortlisted from over 600 entries for the Best Heritage Project category.

The winner though is chosen by the public — or more accurately — how good the venue is at drumming up votes for their entry.

If the Transport Museum wins, in addition to a bauble, they get a £3000 cash prize, which would go straight back into the Battle Bus project and help fund the story of this historic vehicle with new audiences through events and workshops.

You can cast your vote here.