Published 14 November 2010 by By Ian Mansfield Events and Tours, Science

Just outside Didcot lies a very distinctive huge silver ring doughnut that houses, what is basically, a gigantic microscope – and this weekend there was a fairly rare public open day to let the great unwashed inside its structure to see what goes on.

What we were to look at is formally known as a generator of synchrotron light, which can then be used by clever equipment to analyse the internal structure of everything from a large block of metal down to the smallest proteins in the human body. 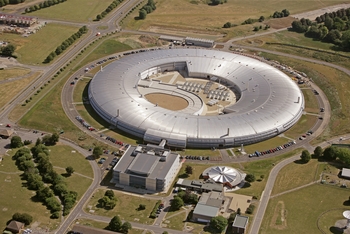 To describe how it works, back in the early days of building the sort of particle accelerators used to fire elements at each other to study them – such as at CERN – they found that their high energy particles had an annoying habit. As they whizzed round the accelerator they lost energy in the form of x-rays. Very annoying for the physicists, but of considerable interest to other researchers who were at the time just starting to use x-rays for studying the very small structure of materials.

For example, it was x-ray interference patterns that helped to uncover the structure of DNA.

Based on that principle, the UK was the first country to build a particle accelerator that specifically designed to maximise this energy loss and put it to good use. The Synchrotron Radiation Source opened in 1981, but has now been superseded by the facility I was to visit, the Diamond Light Source. 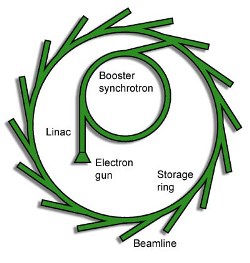 The easiest way to explain how it works is with the image on the side here:

The electron gun – basically a souped up version of the cathode ray tube in an old TV – generates clumps of electrons, which are then speeded up to nearly the speed of light by the linear accelerator (Linac). There they pass into the inner ring, where they run around thousands of times, while increasing the amount of energy stored in each clump. When ready, they are then passed into the huge outer ring.

Here though, while in the storage ring, the really useful work starts.

Despite its circular shape, it is actually not a circle – it is in fact a twenty-four-sided polygon – and at each corner, is a set of clever magnets that “wobble” the clump of electrons in a special way that causes them to glow and emit a pulse of light.

The light pulse goes ahead in a straight line – straight into the gaping maul of an experiment in the “beamline” – while the clump of electrons carries on round the tunnel to the next corner, where everything is repeated again.

Each beamline is made up of three rooms. A light filter which turns the energy into the specific frequency of spectrum you want, then the room where the material is zapped, and then at the end is a room for the researchers to sit to keep an eye on their specific experiment.

For reasons which became clear later, tours of the facility for the general public are not easy for them to arrange, so when the chance cropped up I proverbially leapt at it.

Taking the once-per-hour bus from Didcot train station out to the science park, which is situated in the middle of the countryside as you get closer, the distinctive “silver ufo” becomes visible amongst the more conventional office blocks.

A display in the main office building sitting next to the doughnut kept your correspondent busy while waiting, while women from the WI served coffee. Any more coffee and I could have broken their speed barrier on my own. 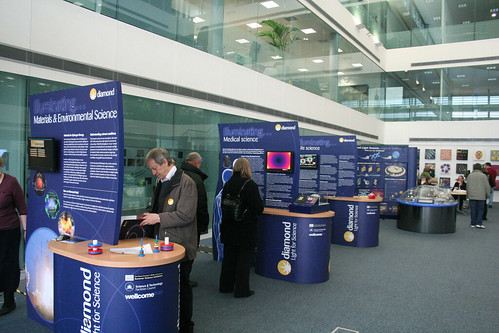 A 40 minute talk about the facility, the science and the work they carry out, and then we were broken up onto surprisingly small groups of just six visitors to each tour guide – all who work full time at the facility.

When you go from the office block to the Synchrotron via a walkway you are taken straight into the main hall and stand on the concrete blocks that cover the main storage ring. Each concrete block is 1.5 metres thick to absorb any radiation that can occasionally be given off. The place is not a nuclear facility, but a tiny amount of radiation is generated. 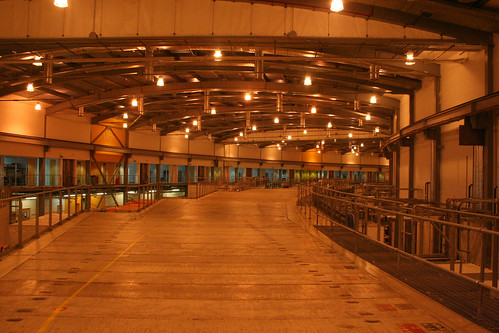 In the main hall, on top of the Outer Storage Ring

We also had the comparatively rare sight of maintenance workers lifting the concrete blocks with the huge cranes – so that they can get into the ring below and replace equipment.

Down to the ground floor and a chance to go into the start of the whole process, where the electron gun resides. The walls surrounding the accelerator are made of about 2 metres of concrete – and to get into the inner sanctum involves walking round several corners in a “concrete maze”, designed to block any escaping radiation bouncing outside by mistake. 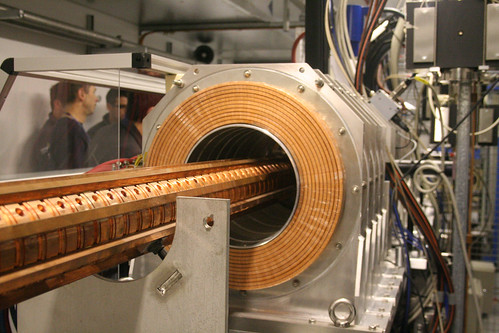 A quick talk about how it works, then off out and around the corner and though another “maze” to get into the accelerator ring, which looks just like you would expect a particle accelerator to look like. You can also see the straight line of the magnets in the distance where the electron gun fires its clumps of electrons into the ring. 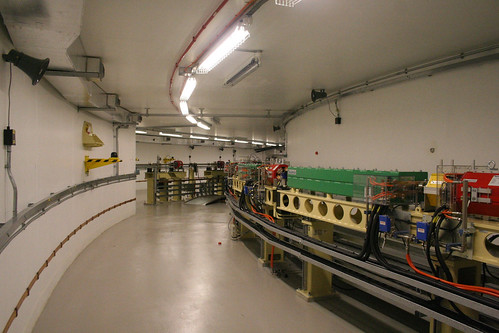 Now to see the big ring, which is to a casual observation basically the same as the accelerator, just bigger. In fact it is 561 metres in circumference. The ring shape naturally defining the otherworldly appearance of the exterior of the building.

Despite the impressive huge scale of everything, it was something at the other end of the scale that most impressed me.

Although they release the electrons into the ring in clumps, there are in fact a lot of “clumps” in the ring at any one time, each generating pulses of light. While technically, the light is pulsed, it is so fast that the result is effectively a continious beam of light being directed down each beamline.

Like all particle accelerators, everything happens in a vacuum, but it is unfeasibly expensive to get a perfect vacuum, so there are some stray molecules of gas in the metal tube. As the electron clumps hit these molecules, some electrons are scattered away and lost – which then means the light pulse they generate is a tiny bit weaker.

This carries on until a clump of electrons is deemed to be wasted.

At that point, and remembering that this is all taking place at almost the speed of light, they can dump that specific clump of electrons, generate a fresh clump from the electron gun and insert them into the stream at exactly the same place as the gap now exists.

That level of accuracy is frankly, astounding.

Dotted around the storage ring are these huge purple machines, where the clever stuff of generating the light pulse from the electrons takes place. Everything is colour coded, so that a person can identify the function of a bit of kit at a glance. Except all the silver pipes that is, which retain a reassuringly Big Shiny Science feel to them. 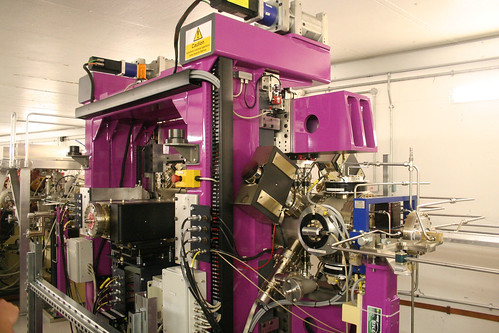 Having seen all this Big Science, the beamline rooms that run around the outside of the ring where the experiments take place are very cramped indeed. So cramped that we didn’t go inside the main experiment chamber where the materials being tested are worked on – but had a look through lead-glass instead. This is a part of the facility that is lead lined, as protection against low-levels of fast decaying radiation.

In contrast, the room next to the experiment chamber is where the scientists work, and looked like a conventional office with computers, and even a sofa lounge-room to one side.

Each beamline – there are currently 13 – contains a complete isolated set-up per experimenter, and there will eventually be 40 potential beamlines in operation when the facility is fully finished in a decade or so.

That may sound like a lot, but the synchrotron is already working 24 hours a day, six days per week on experiments, such is the demand for its facilities. Like God, the machine rests on the seventh day – this case, a Tuesday – but only so that it can be maintained and the shiny metal given an admiring polish.

The fact that it is working almost all the time is why public tours are a bit difficult to carry out as you can’t go into the rings when they are working, so a tour on a working day would be a bit boring. Also the cramped conditions in some of the places means that tour groups have to be kept small, requiring lots of tour guides for a day such as the one I went on.

Disappointing that tours are not more frequent, but it’s understandable as to why.

The whole facility cost around £320 million to build, which as they were very keen to point out, is about half of the cost of Wembley Stadium. Of the annual running costs of £23 million per year, 86% comes from the taxpayer, and the rest from the Welcome Trust, a medical research charity. They also sell 10% of their running time to private companies, and that money is used to buy the non-essential, but rather nice to have things that weren’t in the original budget.

Access to the facility for an experiment is interesting,as anyone can use it completely free of charge – subject to their proposal being accepted by a review panel as legitimate science, and you have to publish the results within three years, so that everyone can share in the knowledge gained.

If you don’t want to publish your results, you write a cheque – for about £10,500 per day – and that is where the industrial customers come in.

The chap taking our group round is a computer programmer who writes the software that turns a huge pile of raw data into an image that can then be used by the researchers. The main synchrotron building runs entirely on Linux, although Windows machines exist in the office areas.

As much of their work is based around creating 3D images of the materials, they also get to play with a lot of cutting edge 3D graphics kit, and also liaise with games companies and special effects studios as there is a cross-over there in their computer work.

They do actually use high-street games console chips in some kit as it happens to be optimised for drawing 3D shapes!

Going on a tour

As mentioned above, tours are not regular occurrences, and the recent tours were all snapped by people on their mailing list before being offered to everyone. For that reason, the best way to secure a visit is to join their mailing list and wait for the alert that visits are available. The next tour will be in March 2011.

The talk and subsequent tour lasted about two hours in total, and I found it a fascinating day out. 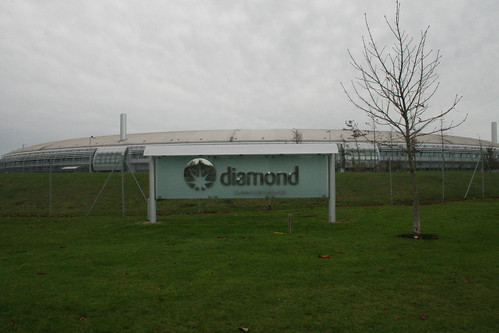