Built on a plot of private land known as the Little Rose, The Rose Playhouse was the precursor of its more famous neighbour just up the road, The Globe Theatre.

Built by Philip Henslowe (who owned a local brothel) and a grocer, John Cholmley, the fourteen-sided polygon building would be instantly familiar to anyone who has seen The Globe. A later expansion added the roof over the stage that is seen at The Globe – and was inspired by The Rose. 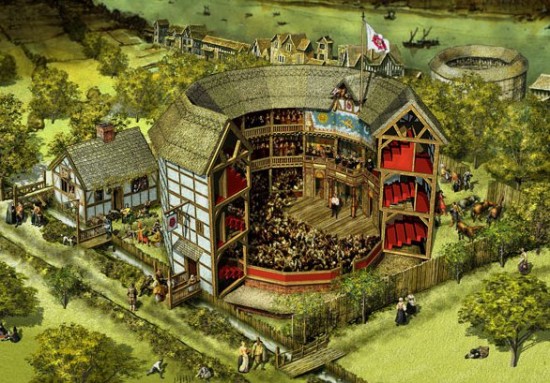 Sadly as often is the case with pioneers, the first playhouse was swiftly surpassed by later versions and The Rose closed down in 1605. The walls torn down and reused, the foundations slowly sunk down into the marshy soil and vanished for nearly 400 years.

By some good fortune, most of the subsequent buildings on the site did not penetrate too deep into the ground, and even a modern office block built in the 1960s managed to miss the most important bits when its foundations were drilled down.

In 1989 though, the office block was demolished and the Museum of London did a survey – and rediscovered the remains of the Theatre building.

After a rather vociferous campaign, the plans for the new office were changed and the remains of The Rose were protected under the office block. Sadly, exposing the remains to air caused problems, so they were swiftly covered up with sand and flooded, with the remains monitored by English Heritage for degradation.

I had known of the existence of the theatre and knew that it was very rarely open to the public – or so I thought – and when I saw it was open for the archaeology fortnight, swiftly added it to the listings calendar.

It turns out that the place is actually open every Saturday now. In fact, it has been for the past couple of years, and the part of the building that still awaits the archaeologists’ trowel is used as a small theatre space.

I was advised to look for a blue plaque on Southwark bridge, but the entrance is more visible thanks to the posters and A-Board outside, although still on a side street away from the main riverside frontage, so lacking a specific address it still took a bit of hunting to find (map link). 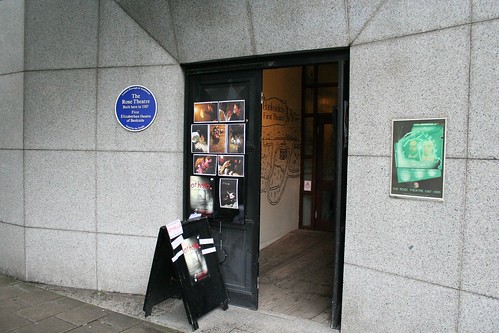 A small lobby area greets you and then through to the theatre space, which is about the size of my living room – the rest of the area being the watery grave for the original theatre. A ring of red lights shows where the outlines of the theatre can be found, if you were to dig down a further nine feet.

Although you don’t get to see any physical remains, the outline helps, and the dim lighting certainly makes the place very atmospheric. A “rather better than average for small museums” video is shown which goes into a lot of detail of the history, not just of the theatre, but Southwark itself – and I will admit to being quite pleased to see representations of the area during Roman times when Southwark was a collection of islands instead of the solid land we see today. 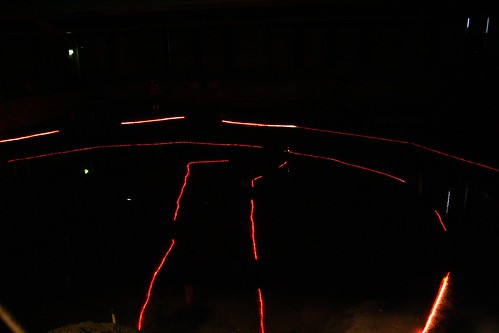 A talk by one of the volunteers filled in the gaps and was to go into details about the future for the site. It’s the future that is looking quite interesting.

Sadly, the remains deep below our feet are rotting away and are in dire need of long term preservation. Also, about a third of the site has never been excavated.

Subject to someone writing a very large cheque – and a Heritage Lottery Grant – the plan is quite interesting.

Obviously, preserve what is there and excavate the rest, but then they plan to cover the remains in a huge glass floor, around which will be built seating and where the original stage would have been will be a new stage.

They aim to carry on putting on plays, and people can either sit in the boxes, or as in The Globe, stand in front of the stage area, except here you will be standing on top of the original theatre. Not even the Globe can offer that. 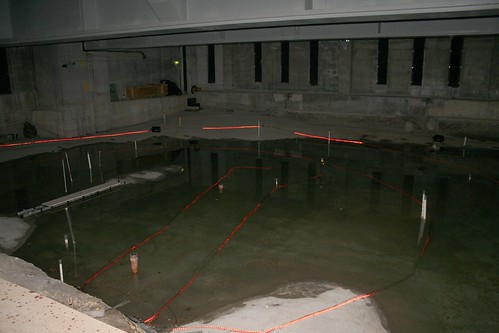 The decision of the Heritage Lottery Fund is due next week. They are asking for £1.6 million towards the total cost of £6 million for the preservation works and conversion into a modern theatre space.

As I now know, the building (map link) is open every Saturday 10am-5pm, and if you are talking a walk along the riverside in Southwark, it is worth a short diversion. Had I known it was open regularly, it’s a diversion I would have taken years ago.

Entry is free, but donations very much appreciated.

Their self-confessed poor website will be updated in September with a lot more information about the planned restoration works. If you fancy taking in a play, then Othello is on at the moment.