Published 26 December 2010 by By Ian Mansfield Events and Tours

As I noticed the other day, the Charles Dickens Museum in Bloomsbury was having a special opening on Christmas Day, and as I was in central London taking photos, I decided to take a detour to visit the place.

The museum is housed in a fairly generic middle class Georgian house on a rather nice wide street with lots of Christmas Wreaths on the doors – the sort of street you can imagine being used by the BBC for one of its period dramas. 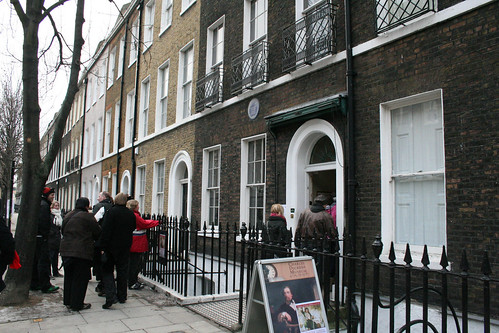 Charles Dickens moved into 48 Doughty Street, on which he had a three year lease at £80 a year, in March 1837.

“It was a pleasant twelve-room dwelling of pink brick, with three stories and an attic, a white arched entrance door on the street level, and a small private garden in the rear. It was located just north of Gray’s Inn … a genteel private street with a lodge at each end and gates that were closed at night by a porter in a gold-laced hat and a mulberry-colored coat with the Doughty arms on its buttons.” source

A notice on the door confirmed the museum was open, but you had to ring a bell to be let inside. Most places with a “ring to be let in” type front door tend to be fairly quiet. So I rang. The door opened, and a horde of people came out.

Getting inside to the narrow hallway and I noticed that the place was packed with visitors going up and downstairs, wandering around the rooms and at the rear, the smell of mulled wine wafted alluringly.

I was really surprised at how busy the place was.

Once you managed to squeeze to the rear of the house, to pay for the entry ticket, it was basically a free roam around the house.

A couple of ground floor rooms, one with some reassuring signs about the expansion plans for the museum and how they won’t be installing loads of “modern stuff” when the place is refurbished.

The whole building is only two rooms deep – although there is a modern extension on the ground floor – so they have brought the next door house as well to display the artefacts, while the historic house will be restored to its Victorian decoration. The aim being to have one house for displays, and the home to “look as if the family had just stepped outside”. Sounds intriguing.

Downstairs to the library which is full of Dickens novels, and I am surprised it is in the (presumably) damp basement. A film was being shown in the side room. The washroom would interest anyone who has watched The Victorian Farm on BBC2. 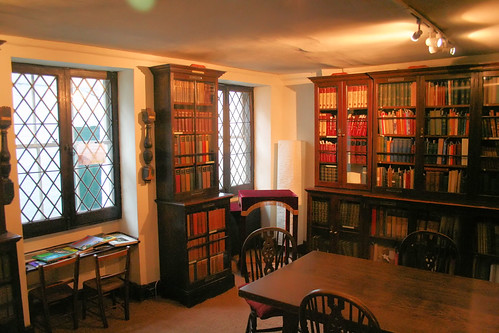 The first floor is the grander level – as was typical for the time – and here was a restored living room and a side study, which was packed full of display cases and the walls lined with drawings and paintings of the famous man and his family. 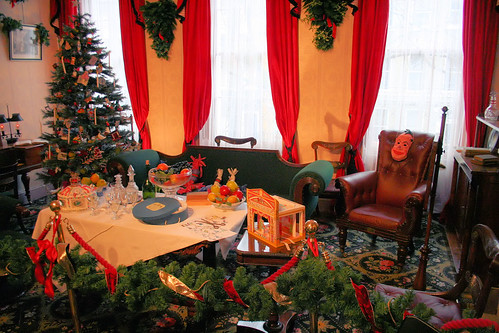 Squeezing up another floor and here was the Mary Hogarth room, left as it was when she died, and a couple of rooms devoted to the musical Oliver. One more floor up was closed for staff.

Lining the staircase was a Christmas display of Victorian drawings, which under any other day would have been fascinating to look at, but impossible to look at in any detail as people struggled to use the stairs for their more traditional purpose.

In the decorated living room, Dickens author Professor Michael Slater gave short readings from the start of A Christmas Carol, and noted a few anecdotes about some of the passages. 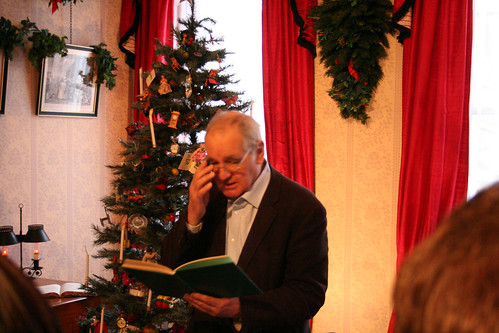 Relaxing in the rear cafe with a rather good mulled wine and a cold mince pie, I pondered the venue. On any other day, I would love to visit the place, but on Christmas Day it was just too busy for me – especially as I was really quite tired by the time I got there.

I was in for maybe an hour, but could probably do 2 hours to look at everything properly. You just couldn’t get to see everything due to the crowds, unless you wanted to spend hours in the place waiting for gaps to appear at the displays.

£14 for a museum visit was too much, but it was Christmas Day, and I can’t blame them for taking a unique chance to raise much needed funds for the restoration plans.

On any other day, £6 is a fair price for a visit to this museum and I will probably go back another day for a longer, less crowded view.