Published 19 July 2010 by By Ian Mansfield Events and Tours

Following my recent visit to the catacombs under South London’s West Norwood cemetery, it seemed sensible to pay a visit to their counterparts in central London yesterday when they were opened for tours as part of the annual open day. 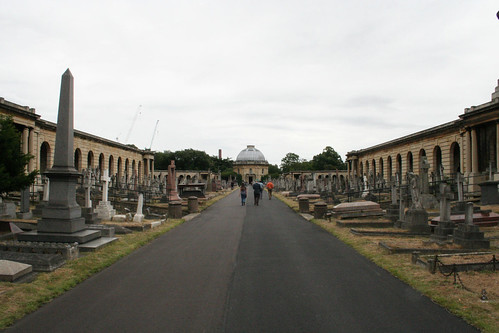 Brompton Cemetery is one of the Magnificent Seven Victorian cemeteries built in the countryside after burials within the City of London were banned in the 1830s. When Brompton was built, it was indeed in the countryside, so some of the people buried there can genuinely say to have known when “it was all fields around here”.

Brompton Cemetery was designed by Benjamin Baud and has at its centre a domed chapel at it southern end, reached by long colonnades, and flanked by catacombs. The cemetery was designed to give the feel of a large open-air cathedral, and has a central nave that runs from Old Brompton Road towards the central colonnade and chapel. 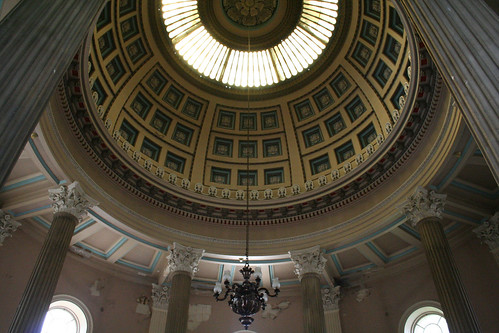 As with most of the Victorian cemeteries, the grandest and most expensive memorials are next to the main road, where they can show off their wealth. The further away from the main avenue you get, the plainer and smaller the memorials become. Although there are the odd exceptions. 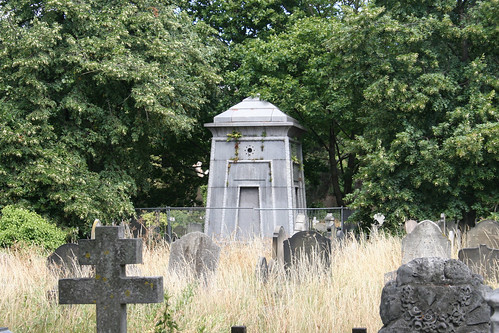 Below the colonnades are catacombs. Unfortunately, the catacombs were not a success and only about 500 of the many thousands of places in them were sold. Indeed, the cemetery was a bit of a financial failure and the shareholders eventually sold out to the government. It is now owned and managed by the Royal Parks, with a Friends Association keeping an eye on things.

The catacombs run directly underneath the colonnades, which can therefore be seen as a two-story structure, half above ground and half below. The main area is a large circle – with two long straight lengths flanking the approach. 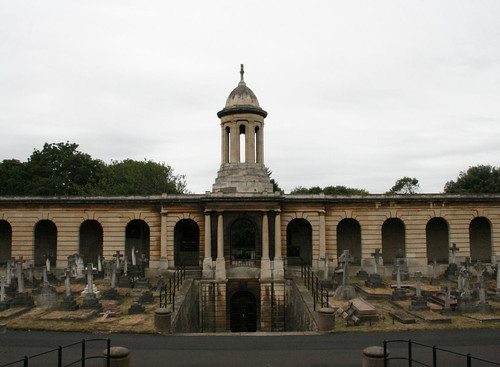 The catacombs at West Norwood or Kensal Rise are basically a large square box that is divided into corridors, whereas the catacombs at Brompton are a long thin corridor that follows the colonnades above ground. I would expect that the design at Brompton would have been considerably more expensive to construct than the cheaper “boxes” used elsewhere, which probably contributed to the financial failure of the catacombs as a burial site.

The fact that clergy in the City Churches got paid for burials in their churchyard also meant that burials outside London were frowned upon until Brompton’s owners decided to split the revenues with the parish the dead person would have lived in.

After that, burials above ground became increasingly popular – although the catacombs were still shunned.

The tour of the catacombs was quite short and basically, after going down the very steep steps, we walked maybe 15 feet along the corridor and there the guide gave us a talk about the history of the site and burial customs in general. 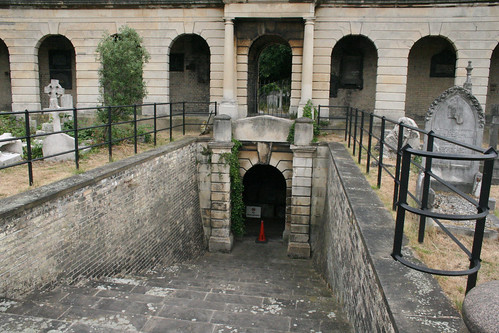 It would have been quite fascinating to be allowed to walk all the way around the circle of the catacombs, but that was not to be. Nonetheless, it gave a good flavour of what the site looks like and anyone who has never been into such a place would have been delighted.

Officially no photography was allowed, but I asked very nicely and was allowed to take a general photo along the corridor so you can get a flavour of the site. 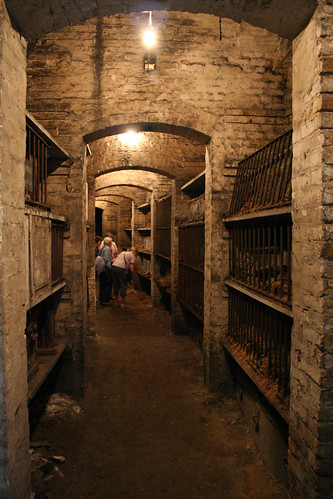 As you look at the photo, the right side is quite shallow, and can hold a single coffin sideways. The left side “rooms” are conventional depth for catacombs and can hold coffins lengthwise. Above the catacombs, there are concave niches on the back of colonnades, which could have been sold to people who wanted an above-ground statue as well.

They are all empty.

The guide, who was one of the founders of the friends – and has ancestors buried in the cemetery – said that they would be delighted to have a modern internment in the catacombs as no one has taken a spot there almost since it was opened.

Something to consider if you want to become a permanent tourist attraction in your death.

Apart from the annual open day, they also hold regular walking tours of the above-ground burials on the second and fourth Sunday of the month.

As part of the open day festivities, there was also a display of owls and birds of prey from an organisation that can often be found at fêtes and fairs around London. 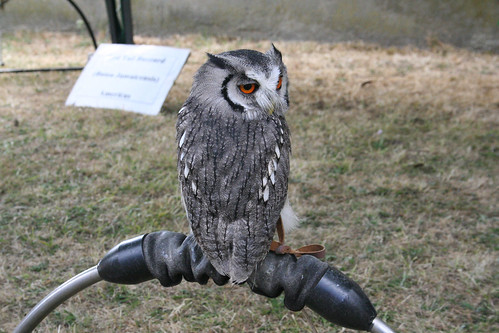 1 Pings/Trackbacks for "Visiting the catacombs under Brompton Cemetery"