Published 22 February 2009 by Events and Tours

Another in the occasional series on gaining access to places which are not conventionally open to the public.

If you have ever visited the Cabinet War Rooms in Whitehall, you may be aware that it wasn’t the only underground bunker built during the war – indeed, there were loads of them all over the place. One of the more important, and yet little known outside bunker-fans, is based inside RAF Uxbridge in North London – and it was from here that much of the Battle of Britain was commanded.

The site was the headquarters of No. 11 Group RAF during the Battle of Britain. 11 Group was responsible for the defence of London and the South-East of England, and therefore was the main area of combat. The group headquarters were specifically at Hillingdon House within the base grounds. An underground operations room was built nearby to handle the control of the fighter squadrons – and it is that I will write about.

Incidentally, Uxbridge was the RAF base where Thomas Edward Lawrence (Lawrence of Arabia) served.

Anyhow – inside the grounds of the RAF base is the underground bunker which is built about 2 stories below ground and, from my experience of visiting places like this – it’s a big one.

If you arrange a visit, you arrive at the base, and after security check, given directions for a 10-15 minute walk from the gate to the bunker. Outside is a memorial to those who died during the war.

The curator of the museum arrives and takes us down the flights of stairs (74 steps). At the bottom, as with most bunkers there is a double door to pass through. The bunkers air pressure was maintained slightly above normal atmospheric pressure, so that if a gas/chemical attack occurs the poisons can’t leak into the bunker. To protect the higher air pressure – two doors are needed as an airlock.

Going inside you are taken along a lengthy corridor, lined with contemporary posters from the war time and into the main command room.

This has been fully restored – and laid out as it would have been on one of the busiest nights of the Battle of Britain, and once everyone is settled, the curator gives a very informative talk about how the room ran, with the famous map and its mobile markers, and how the boards with various flight formations could explain the battle to the observers. 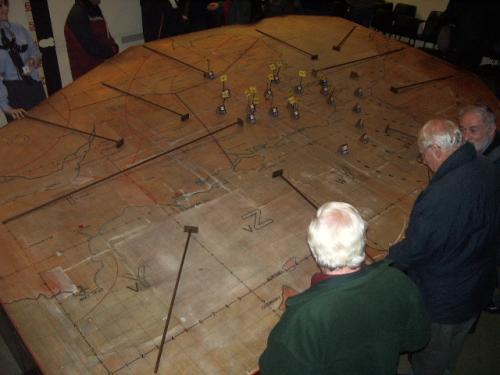 Inside the room, there is the main map layout, then a couple of rows of raised seating (very cramped) where messages about the battle were passed down to the map girls. Behind those seats is a curved glass window and behind that sat the officers and VIPs who made the decisions about the battle. 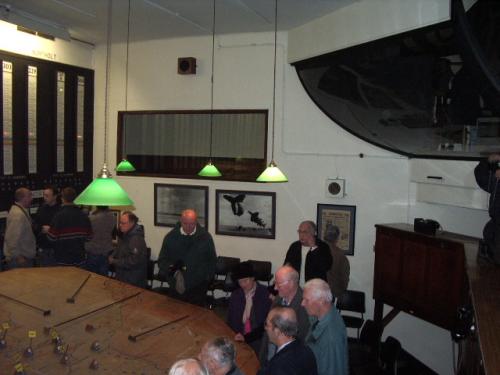 After the talk and wander round the place – you are then able to go up a floor to the officers room and see how they worked – and it is here that the strange curve in the glass is explained.

If you have ever noticed the shop windows at Waterstones (ex-Simpsons) on Piccadilly, or Habitat on Tottenham Court Road – they are also curved. This has a clever effect, and so long as the glass is kept clean, the curvature makes reflections very difficult and the glass almost vanishes. It’s quite a peculiar effect – and used to great effect here in the bunker.

As there is no reflections or light glares on the glass, they can see down to the map almost as if there is nothing in the way – but the glass still protected them from the noise in the map room – so they could talk in some privacy.

There is also (and I wasn’t actually expecting this), a surprisingly large museum down there of WW2 memorabilia. 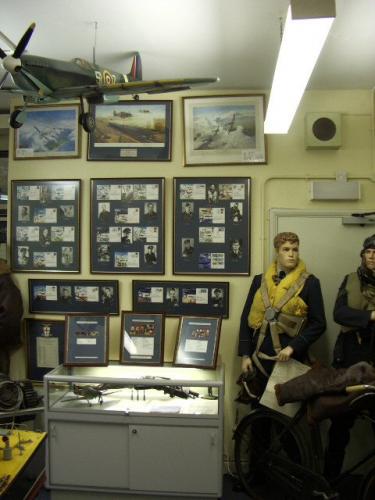 It’s a very interesting place to visit – and I left being very impressed with how they were able to keep an eye on the air battles using little more than telephones and strips of board on a wall.

If I recall correctly, we were underground for at least a couple of hours.

Tours are slightly complicated as the bunker is inside a functioning RAF base and you can’t just turn up and ask to be let in.

It is easier to arrange a visit as part of a group of people (friends, work etc) and then write to The Curator, Former 11 Group Operations Room, RAF Uxbridge, Middlesex UB10 0RZ requesting a visit and giving your contact details (inc phone number) and how many people would be on the tour.

For my visit, I took a group of 15 people and we joined up with a couple of other groups to make up the maximum 50 people permitted in at any one time.

On the day of the visit, you have to register with the gatehouse where they will check your ID matches the earlier supplied list of names, and then you are directed to the bunker itself.

The tours of the command bunker are free of charge – but the museum does appreciate donations.

It may be possible that visits will be easier in a few years time as the RAF base is to be decommissioned and hence the bunker will be in a public area.

The Ceremony of the Keys

3 Pings/Trackbacks for "Visiting the “Battle of Britain” Underground Bunker"