Visiting an archological dig behind the British Library

Behind the brick edifice of the British Library is a large plot of still derelict land which will shortly be turned over to builders for the construction of a medical research centre (with public areas!) but as usual with any building site in London, the trowel wielding chaps from the Museum of London get to have a look first.

And for the next few days, we mere mortals can also have a look at what they have dug up.

Don’t go expecting to find Roman ruins or medieval buildings as this is an industrial site and any previous history was wiped out by the Victorians – but you do get so see a really very interesting relic of Victorian hydraulic power.

A quick bit of history – basically, you have St Pancras Station built by the Midland Railway and even during construction, they decided that they wanted to expand the cargo carrying capacity, so they built a railway goods yard next to the station, and to give you an idea of the size of it, it was not much smaller than St Pancras station itself.

The construction started in 1883 and was finished in 1887, about the same time as the main passenger station. Apart from a few modifications – and bomb damage in WW1, the goods yard carried on fairly normally unti8l the 1950s, when coal deliveries started to die off. 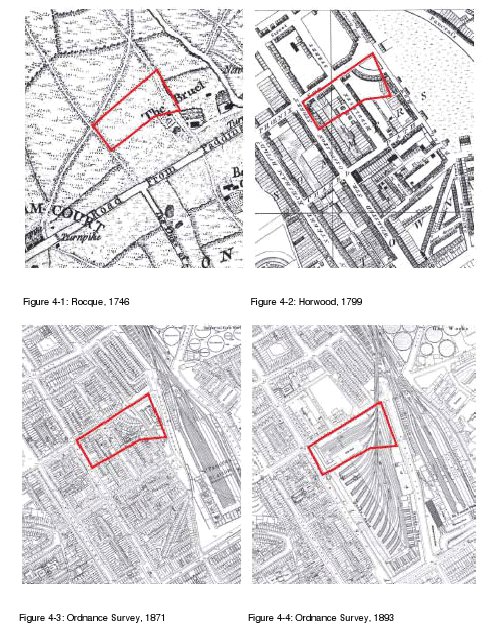 The red box is the land currently being developed.

In 1968, the coal depot closed and in 1970, the souther side of the goods yard was demolished to make way for the British Library – who then famously took a couple of decades to occupy the site.

Going back to the original construction, the area was covered in low quality housing occupied by “the labouring classes” at the time, but planning laws gave railways quite awesome powers to seize land and do what they wanted, so the whole area was flattened and a two story railway goods yard built. 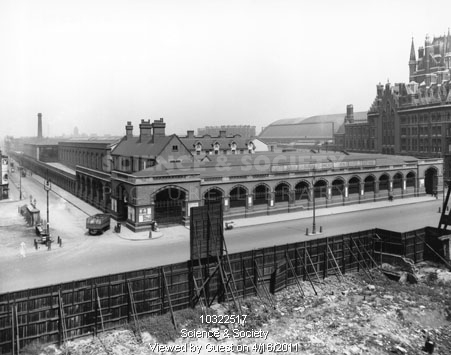 Like the station next to it, the trains came in on the 1st floor, and the goods were then lowered down to the street level, where local trucks and horse/cart could collect the mainly fresh food and milk and distribute it around the city.

The British Library occupies the front half of the site, and the back half is the bit that will shortly be built on.

Being a goods yard, although two stories high, there isn’t a great deal of structure to speak of, and most of it was cleared away a long time ago, but the remains of the hydraulic power plant was uncovered.

In the days before electricity, motive power was often delivered in the form of high pressure water that then power pumps and even lifts. Although most of London was powered by the London Hydraulic Power Company, for some reason the goods yard built their own local energy plant.

This was made up of six boilers, which then heated water to drive a steam turbine which would pump water into an accumulator tower. In essence, the water pumped in pushed a giant heavy weight up the tower, and then gravity tried to pull it down,and that action was used to pump water under pressure around the goods yard and power the cranes, lifts and the like.

The photo below shows the spaces for the boilers on the left, and the brick lined channels you can see to the right carried the flue waste away from the boilers to a chimney to the right of the photo. 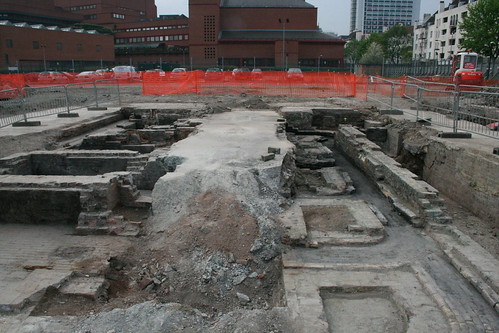 To the right was also the accumulator tower, the remains of which are visible here. 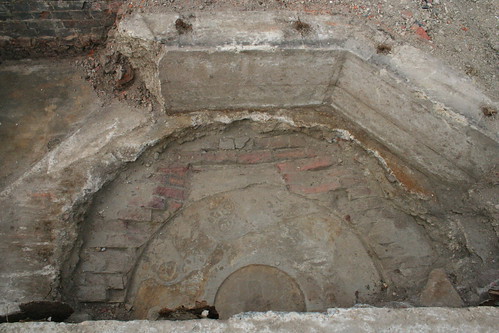 The cobbled flooring is original, and the tarmac that was later lain over it was only a few inches thick, so its impressive that it survived, although the lack of digging has been helpful to the archaeologists. 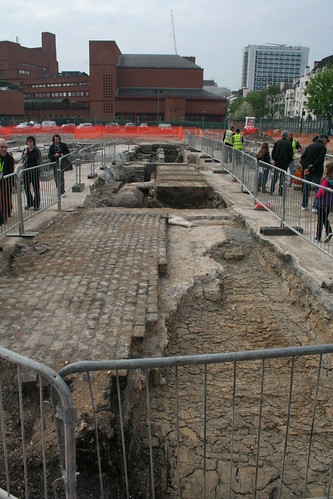 More details of the tours here.

More of my photos here.