Published 9 October 2011 by By Ian Mansfield Events and Tours

Lurking under a substantial road bridge in north-east London lies a remnant of the second world war – a public air-raid shelter that probably housed about a thousand people during bombing raids.

The area, mainly of semi-detached houses with decent sized gardens would normally have been expected to have Anderson Shelters in their back gardens, so why was such a large public shelter built here? As it happens the area is the side of a hill, and you can’t easily build shelters in sloping back gardens — and they would have flooded during rain anyway — so a communal shelter was provided.

There was already a major road bridge on the site, and it would appear that they took advantage of that to provide the roof, then built substantial walls underneath to create large dormitories that could be used by the public.

There seems to have been two doors on either side of the shelter, with two smaller escape doors at the lowest part of the shelter. Another larger door in a subway under the road was probably the main entrance, as the road above would have provided additional protection to people entering the shelter. 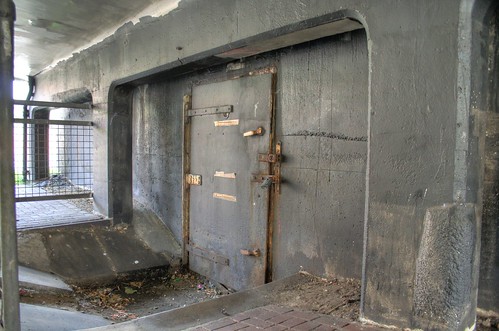 After the war, the local horticultural society were offered the site in exchange for the fields they had occupied during the war – so a large part of the site is curiously now a garden centre shop run by local volunteers.

As part of the Woodford Festival, they are letting people wander around the shelter, both the shop and the “staff only” areas. 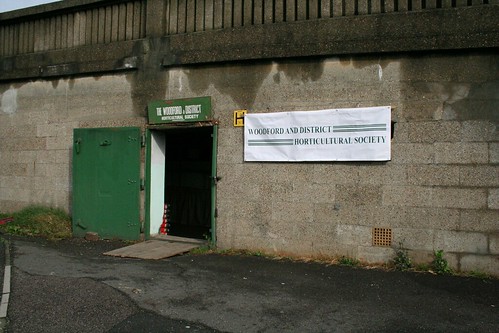 It looks as though the shelter was split into various dormitories, in a 2×4 configuration. The Garden Centre have 6 of the rooms, and the other two are used by “someone else”. 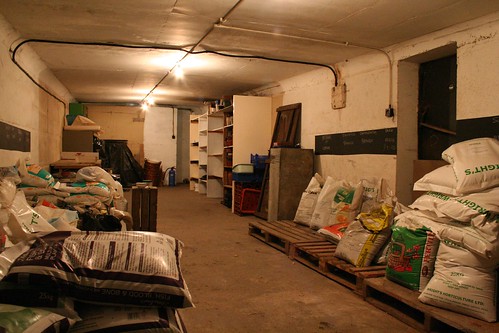 Being built under a road bridge, the roof slopes down at one end. At the highest point, it is thought that there would have been bunk beds stacked three high (couples below, singles above) but probably just two high at the lowest point.

As the place is now in use by the horticultural society, there is nothing left of the WW2 bunks — and the shelter would have been stripped for materials during the post-war austerity anyway. However, the large metal blast doors are still in place in several places, each with a spy hole so that if a bomb hit the shelter, some of the blast might be contained in just one dormitory. 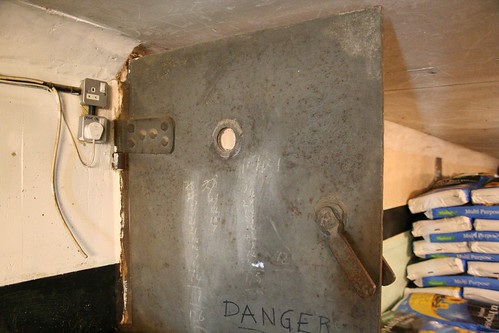 The current occupants tried removing the doors, but taking one off proved so difficult, and they are so heavy that they never tried that again!

Ventilation holes are visible thought the walls, that line up with metal doors in the exterior walls – probably designed to be closed during a raid in case of gas attack, although the shelter lacked any of the double doors that military bunkers have to protect against gas.

No toilets either – it is thought there might have been chemical latrines behind a curtain as some other shelters would have, or possibly people just brought a bucket as would have been normal in the tube stations.

Although there is not much left of the original WW2 fittings, the structure is still worth visiting as it is still atmospheric (indeed, probably better for not being “restored”) and you can still see some signs that this is no mere storage area, but had a military function. 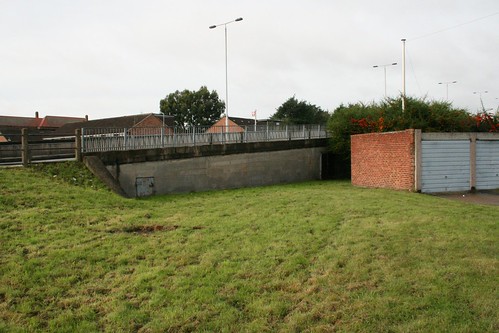 The shop is open every Sunday except during December, and they might let you poke around the stockroom if you ask very nicely. 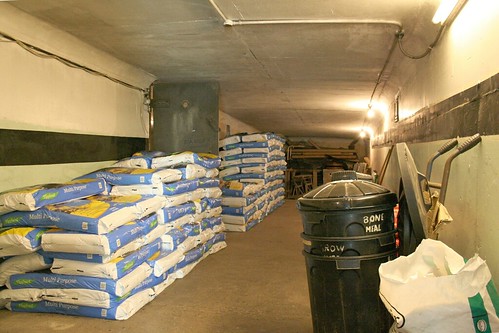