As open-air funerals have now been – sort of – legalised, I propose the following for my own funeral. 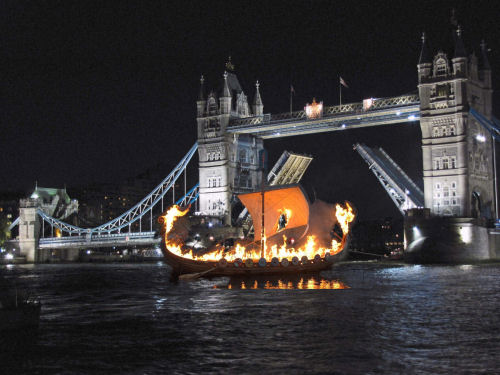 Yes, I know it is a really bad bit of photoshopping!

Not only a fantastic way to leave the city, physically as well as spiritually, it could be quite a tourist attraction. Will Mayor Johnson move to support the plan?

For the avoidance of doubt, I think the people should be free to select their own method of funeral, so long as it doesn’t cause too much annoyance to other people.

Anyway, I am off to Vikings R Us and looking for the fiery funerals booking form on the Port of London Authority website.

A extra thought: There does seem to be a slight irony in that a law which means a seemingly outdoor area, but bounded by the most flimsy of structures is considered to be “indoors” for the purpose of the anti-smoking laws – has now been used to enable cremations, which will result in quite a considerable amount of smoke being emitted.