Unbuilt London: The Victorian skyscraper taller than The Shard

Around 160 years ago, plans were announced for a skyscraper in London that would have a summit even higher than The Shard stands today.

It would also have been largely built from recycled materials left over from the Great Exhibition in Hyde Park of 1851. 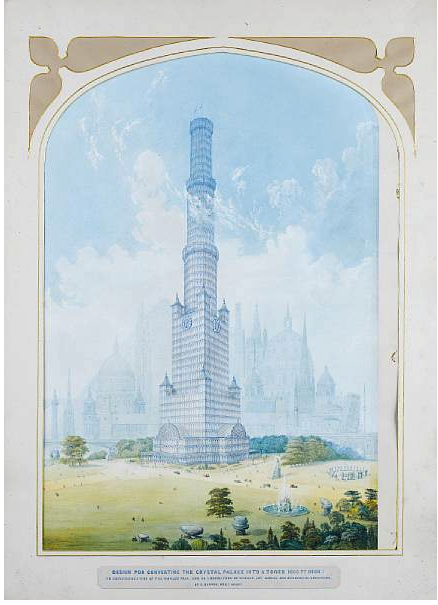 When permission was given for the exhibition to be opened in the centre of London, it was on a temporary basis, and they had to decide what to do with the building afterwards. Wisely constructed from a pre-fab design, it was always intended to be taken down and in some form or other rebuilt elsewhere.

Despite a petition signed by over 100,000 people calling for it to stay in Hyde Park, it was taken down at the end of the exhibition and the owners of the structure started looking for a new site. Famously, it ended up down in Sydenham, and much larger than the original.

There was an alternative proposal for the piles of sheet glass and ironwork — turn it into a huge skyscraper.

Conveniently also at Sydenham, the proposal by Charles Burton envisioned a glass and iron tower with a gigantic clock half way up, and a series of steam powered vertical railways to carry people to the summit of the tower.

It’s worth calming you down a bit, as a vertical railway is what early engineers called the device we today call a lift. Sorry if you expected locomotives to race up and down the outside of the building!

It would however have stood a staggering 1,000 feet high, which in physical height is only slightly lower than The Shard today, but thanks to the much higher ground around Sydenham would have seen it towering about 100 feet above the Shard in sea-level terms.

Sadly even if the railway investors who wanted to put the Cystal Palace in Sydenham to support their railway lines could have been persuaded to go vertical instead of horizontal, the building simply wouldn’t have been viable.

Put simply, materials sciences were not ready for such a tall building, which would sway in the wind in a manner not ideally suited to stiff ironwork, and the iron at the base would have collapsed under the weight it was being expected to carry.

We might today be remembering not the fire of 1936, but the great collapse of the 1870s.

Various designs for the skyscraper exist though, such as this one which was sold at auction a few years ago. Look very carefully, and you might notice the replica Stonehenge in the gardens!

There is also this drawing. Or, if you want to see a design in person, there is one in the V&A museum, in room 122f. 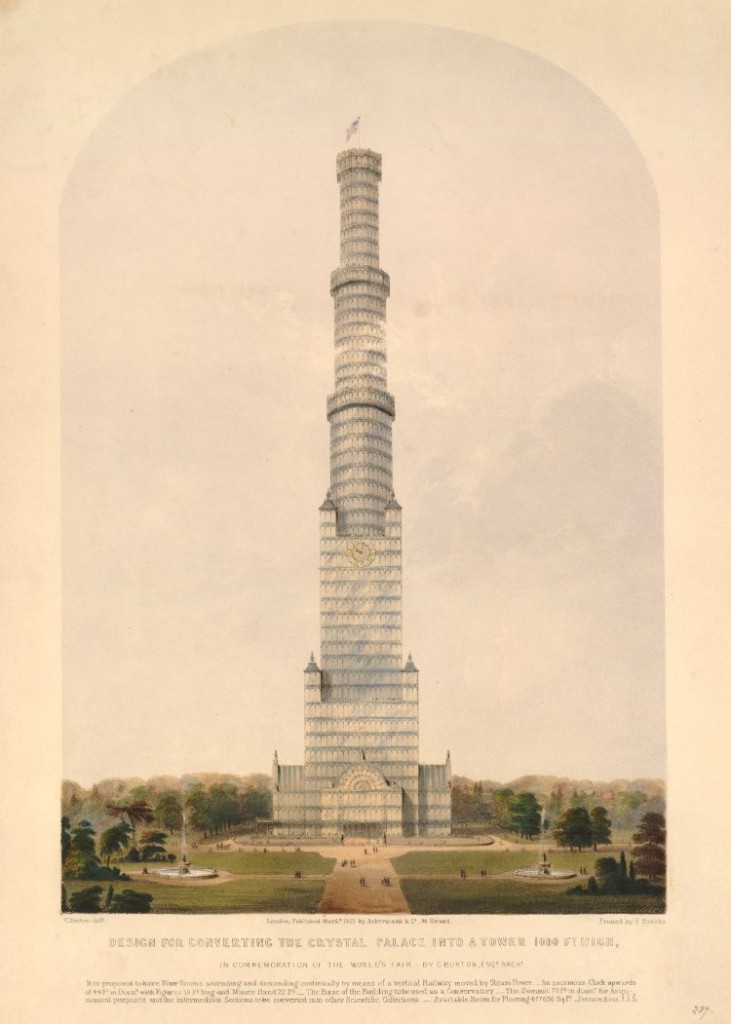