Unused station platforms could be opened for Heathrow rail link

Two unused platforms at an underground station could come into use, if a proposed new rail link to Heathrow Airport is approved.

The proposed link aims to improve services from the Reading side of the mainline railway, and includes a 5km tunnel from the Great Western Main Line to Heathrow Terminal 5.

There it would link up with the existing Picadilly Line and Heathrow Express platforms, making use of two other platforms which were built, but never put into use.

The two platforms were put there during the construction of the station, in the anticipation that they would be needed for a proposed rail link to Waterloo Station, and maybe the link to Reading. 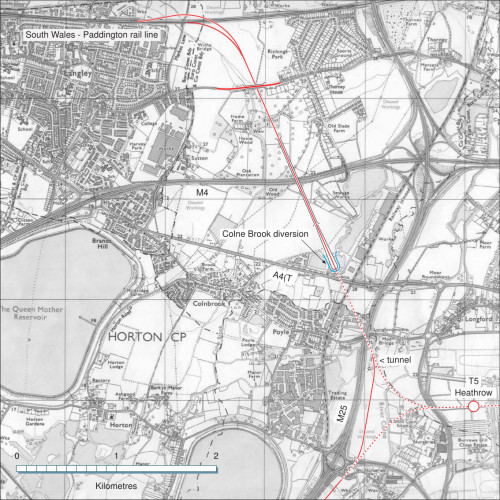 The proposed rail link will leave the Great Western Main Line at a new junction between Langley and Iver station and link in with existing railway platforms at Heathrow Terminal 5. It will provide the capacity for four trains per hour from Reading to Heathrow via Slough, with alternate services calling at Twyford and Maidenhead.

If planning permission is granted, Network Rail would begin work at the end of 2016 with tunnel work starting in early 2018. The whole project would be complete in 2021, and could cut the journey time from Slough from 30 minutes to just 10 — making it even easier to escape from Betjeman’s hell.

The first stage of consultation on the plans starts this month and will consist of a series of public exhibitions in communities and stations potentially affected by the work.

In addition, events are taking place within local stations where passengers will be able to pick up copies of consultation leaflets and view exhibition boards:

A second phase of public consultation is expected in the summer ahead of submitting an application to the Planning Inspectorate in early 2016, for the necessary consent to build the scheme.

In related news, Heathrow Express has already said that it will bid to run the trains when the tunnel is built.

Incidentally, the preferred option for the HS2 spur to Heathrow would see a station built at right angles directly above the existing underground station. Where there are currently 4 platforms, they could end up with at least eight in a couple of decades time.