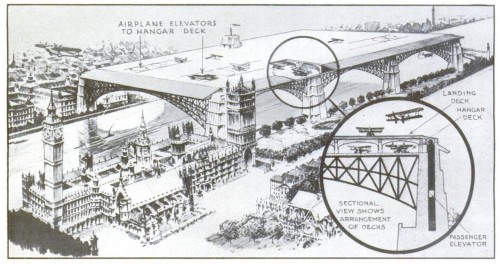 Sometimes an image exists, one which crops up occasionally on websites with little other than a comment about how daft the idea is. I try to dig in deeper and find out how that image came to be, what was the thinking behind it.

I know that there was talk of an airport in central London, which would have covered the Thames. I know this was in the early 1930s, around the same time as rival plans at Kings Cross or for the roof of Waterloo Station were talked about.

But, other than a drawing in the Popular Science magazine, nothing else seems to be known about this crazy scheme.

There were other schemes for an “airport spanning the Thames”, as this one in the Getty archive shows.

As it happens, using the Thames as an airport was not in itself an unknown factor, as there were experiments with landing flying boats on the Thames, as shown here at Westminster (with the old Lambeth Bridge), or here passing through Tower Bridge.

But the gigantic aerodrome that would have seen planes taking off next to MP’s offices. Sorry, just a single drawing in an 80 year old magazine.

Had such an airport been built in Central London at the time, it would today be obsolete, as naturally aircraft need longer runways, so would it have been demolished, or would it today be home to range of lightweight buildings, or even a park?