A scheme once proposed replacing five railway stations in central London with one giant terminus in Southwark.

Hello to, well, it was never given a name, but lets call it Southwark.

In 1920, and the motor car was already being seen as the future, so why clutter up the busy Metropolis with dirty railways when the tracks could be ripped up and replaced with nice new roads? 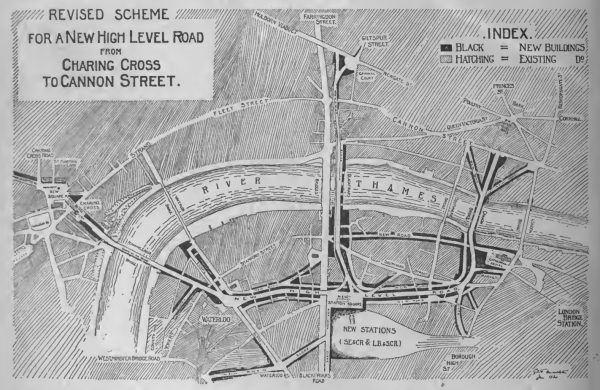 The aim was to reduce road congestion in London through a number of measures, including the conversion of the railway between Charing Cross and Cannon Street to a high level road. This plan was not in isolation though, as there was a long running campaign to get rid of Charing Cross station and usually, replace the “ugly” railway bridge with a road bridge, which by some mysterious method would not be ugly.

As was appropriate for the thinking of the time, the conversion of the railway into a road would also enable them to sweep away the “mean dwellings of slum character” and replace them with grand buildings more suited to the capital of an Imperial Empire.

The railways weren’t totally abandoned though, with the demolition of Blackfriars, Cannon Street, and Charing Cross, a replacement station would be needed to cater to those foolish enough to rely on trains.

A grand new station would be built roughly where Southwark tube station is today, combining the services offered by the South Eastern and Chatham Railway and London, Brighton and South Coast Railway via London Bridge.

It was felt that this combined station would offer “sufficient accommodation […] to meet the requirements of the new South London for the next hundred years or more.”

Of course, railway users would no longer be able to travel into the City, and it was noted that, with “equal ease” they could finish their commute by road vehicle.

Today we know the motor car is a curse, and had the plans been carried out, we might today be aching for the tarmac to be ripped up and trains restored once more. Such are the vagaries of history.