Unbuilt London: The Pyramid of Death

London’s skyline so long dominated by a building that offered a promise of the afterlife could have been overtaken by a resting place for the bodies expectantly waiting for their own resurrection.

What was officially known as the Metropolitan Sepulcher, but more widely as the Pyramid of Death — was a proposed massive pyramid built on Primrose Hill, which would have stood a staggering 950 feet high.

(not far short of The Shard today, but it would have been nearly as wide as it was high)

Described as 94 storeys high, it’s possible that each floor would have been lower than we think of as a normal height for a building, thanks to the occupants being mostly lying on their backs.

Comfortably over looking the dome of St Paul’s Cathedral in the city, and every other building occupied by the living as it happens. 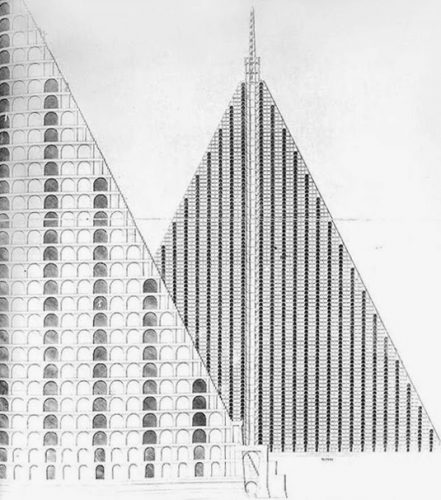 It would have been not just massive in size, but also ornate, being made from brick with granite facings, and a steam powered lift to elevate the dead to their new resting places.

Sadly, the proposal, by Thomas Wilson in 1820 was evidently never built.

Had it been, even today, the mausoleum would be a massive structure, perpetually reminding everyone within miles of their own impending doom.

It is however worth noting that this seemingly bizarre pyramid in London was not proposed in isolation of what was going on in society. It was, by the standards of the time, not entirely without merit.

London was urgently looking for a solution of what to do with the dead, who have a most unfortunate habit of cluttering up graveyards and not vacating them — and within a decade a number of the great Victorian cemeteries would be opened, at the time outside London, but today oasis of calm and wildlife within the suburban realm.

London was also at the time going crazy for anything Egyptian, with the recent deliveries of antiquities from that far land arriving in the UK, and Percy Shelly writing Ozymandias.

So with authorities pondering what to do with the dead, the great cemeteries not yet built, why not a massive sepulcher, and in the exceptionally fashionable design of an Egyptian pyramid?

“It will teach the living to die, and the dying to live forever,” Willson claimed in his proposal. A company was even set up to build it — the Pyramid General Cemetery Company.

It could have been built for £2,500, and was expected to generate a profit of a staggering £10.7 million when finally filled with London’s dead. The 18 acres it was expected to occupy on Primrose Hill was said to be the equivalent of 1,000 acres of a normal church yard.

The catacombs — each holding 24 bodies — would have been rented to the church parishes or families at a rate of £50 per vault — although I presume the higher up, the higher the price as the resident would have been closer to God.

The very top though was to be for the living, a place of work — for the summit was to be an astronomical observatory. For some unknown reason.

The artist, Laura Haines has recently envisioned what it would be like as a modern tourist attraction. 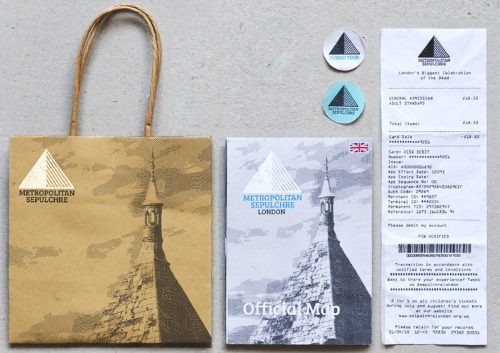 With the capacity to house some 5 million bodies, and with cremation being far more popular today, it’s quite possible that the Pyramid of Death would still not be full.

Although many municipal cemeteries are overflowing, there are still empty plots in the Magnificent Seven Cemeteries, and they offer residence for far fewer dead than the Pyramid planned.

What looked at the time as a financial bonanza could have been a white elephant.

Not that would have stopped the architect, who while his plan for London foundered, he took umbrage at a similar scheme for Paris, writing to the London Evening Standard in protest against the plagiarism.

Indeed, we might today be looking at the pyramid as a colossal waste of space and there could be calls to tear down the half-empty sepulcher in favour of a less dominating funeral facility, and to reuse the vast acreage it occupied for a more pressing concern.

Homes for the living.

Necropolis: London and Its Dead